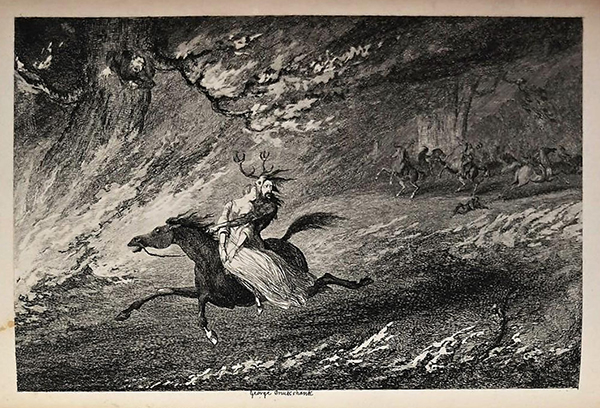 Windsor Castle by Wiiliam Harrison Ainsworth was an epic tale that originally appeared as many Victorian novels did, as a serial in the pages of Ainsworth's Magazine in 1842, and was published as a complete book the following year. Lavishly illustrated by George Cruikshank, Windsor Castle was a historical romance set in Tudor times. The plot centres on the love affair between Henry VIII and Anne Boleyn. However it also contained more than a touch of the gothic, in the shape of a demonic spectre that haunts the dark bowers of Windsor Forest - Herne the Hunter.

While Herne is depicted as a spirit of the wildwood, and again as a leader of the Wild Hunt, there's no ancient pagan wisdom here, no forest divinity or spiritual ally for the forces of Light. Rather this Herne is very much batting for the other side. Ainsworth gives us a couple of versions of his origin story in the following extract -

“Heaven shield us from evil spirits!” she exclaimed, crossing herself. “But what is the history of this wicked hunter, my lord? and why did he incur such a dreadful doom?”
“I know nothing more than that he was a keeper in the forest, who, having committed some heinous crime, hanged himself from a branch of the oak beneath which I found the keeper, Morgan Fenwolf, and which still bears his name,” replied the earl. “For this unrighteous act he cannot obtain rest, but is condemned to wander through the forest at midnight, where he wreaks his vengeance in blasting the trees.”
“The legend I have heard differs from yours,” observed the Duke of Richmond: “it runs that the spirit by which the forest is haunted is a wood-demon, who assumes the shape of the ghostly hunter, and seeks to tempt or terrify the keepers to sell their souls to him.”
“Your grace's legend is the better of the two,” said Lady Mary Howard, “or rather, I should say, the more probable. I trust the evil spirit did not make you any such offer, brother of Surrey?”
The earl gravely shook his head.

A far cry from the wise otherworldly ally in The Box of Delights! Here we have a demonic ghost rather than some species of nature spirit or pagan power. Indeed, I do wonder whether Masefield was referencing the real world Herne at all, and had just freely remodelled the character for his own purposes!

However Ainsworth has a lot more to say on the legend of Herne. Later on in the novel, in book IV, chapter VI, we get a far more detailed version of his origins, which I'll summarise now. Basically Herne was one of the keepers of the Forest of Windsor in the reign of Richard II, and celebrated for his skills in woodcraft and hunting. He was also brave and loyal, leaping to save the King from a rampaging white hart when hunting. Herne was fatally wounded, but a magician named Philip Urswick saved Herne's life. Urswick chopped off the hart's antlers, and then tied them on to Herne's head, whereupon they attached themselves magically. This rite will restore Herne to health and life, however the other keepers are jealous that Herne when eevocerrd will be promoted to head keeper for his valour. And so a deal is struck with the magician, that Herne will recover but will have lost all his skills in hunting and archery. And so the cure comes with a curse. Herne is increasingly perplexed by his loss of talents and in a fit of despair hangs himself from an oak tree. However after the discover of his suicide, the body vanishes from the tree, and dire events befall the treacherous keepers. And from then on, Herne haunts the forest, dressed in chains and wearing an antlered stag's skull helm forevermore stalks the forest, sometimes accompanied by a pack of hounds, sometimes even riding with a spectral host of undead huntsmen.

Now Ainsworth's novel was a huge hit, and understandably so - audiences down the ages never tire of hearing the tale of Henry VIII and Anne Boleyn and fusing this oft told historical saga with a gothic ghost story was inspired. It certainly popularised the character of Herne the Hunter, who would star in a romantic drama, Herne the Hunter or The Royal Stag Hunt of Windsor Forest by Thomas Prochis Taylor, which opened at the royal Amphitheatre, Amphitheatre, Astleys 5th June 1843.

The spectral huntsman would also get a penny dreadful of his own too - Herne the Hunter: A Legend of Windsor Forest penned by that elusive but highly prolific author anonymous. And given the propensity for Victorian theatres and penny dreadful publishers to leap on any bandwagon going, often to the extent of producing what we'd call mockbuster cash-ins and pirate versions, I heavily suspect both of these works owed more than a little debt to Harrison's novel.

Now Ainsworth was something of a master at turning historical lore into bestselling fiction - an early hit for him was his novel Rookwood, which delivered a gothic adventure featuring Dick Turpin, while a later bestseller was The Lancashire Witches, a novel based upon the Pendle witch trials. Other books center on the brief reign of Lady Jane Grey and the exploits of real life criminal Jack Sheppard. And so, it's unsurprising that many have assumed the detailed origin found in the novel Windsor Castle is Ainsworth weaving a genuine folk tale into his plot. Indeed while on the trail of Herne the Hunter, I've discovered many sources reporting the Ainsworth version as authentic folklore. 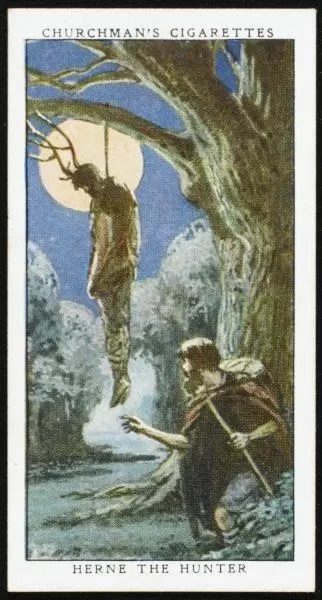