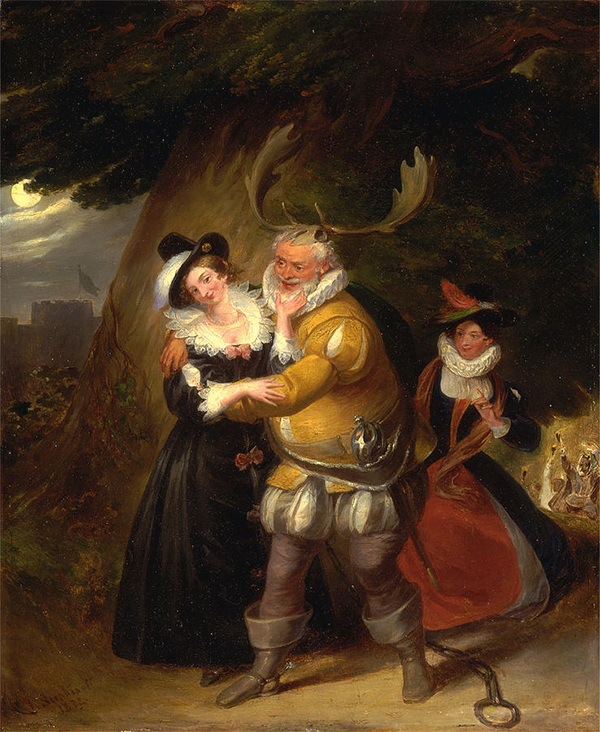 There are no earlier versions of the Herne story recorded, however the story Shakespeare relates does have a ring of authentic folklore about it. For example, manifesting at a certain time and place is typical of local legendary spectres. Furthermore appearing at wintertime is usually interpreted as Christmas time, for the play often gets a Yuletide setting. And as I have detailed in previous seasonal specials, traditionally winter and in particular, the Christmas season, was when most folkloric ghosts go a-haunting.

Plus shaking a chain fits a folkloric pattern too. As well as being traditional fashion accessories for ghosts, with diverse beings from giants such as Jack-in-Irons to various hellhounds and black dogs being said to manifest with the sound of chains and metal.

But other elements are a little off track. In particular causing milk cows to give blood instead of milk is more usually ascribed to the action of witches, or occasionally fairies than ghosts. Likewise the blasting of trees sounds very much like the traditional storm raising of witchcraft. Hence there is the possibility that Shakespeare had amalgamated several old legends into one new Herne shaped package.

However, on the other hand, people in ages past didn't have precise categories for supernatural beings. Now thanks to fantasy fiction and games, we in the 21st century tend to think of mythical creatures as being many distinct species and races. However this was not the case until fairly recently. For example, in A Christmas Carol, Scrooge in relation to Marley refers to ghosts and goblins, while in Ainsworth some think Herne a doomed spirit while others reckon he is a demon.

Samuel Ireland certainly seemed to think the legend of Herne was real folklore, and what's more, records several details not found in either Shakespearian account -

The story of this Herne, who was keeper of the forest in the time of Elizabeth, runs thus :— That having committed some great offence, for which he feared to lose his situation and fall into disgrace, he was induced to hang himself on this tree. The credulity of the times easily worked on the minds of the ignorant to suppose that his ghost should haunt the spot. This rendered it a fit scene of action for the purpose of our bard to terrify and expose the cowardice of the fat knight, who, in the following speech, confirms the idea of Heme's ghost being supposed to walk near this place, and is even desirous of imitating the keeper's voice -
Divide me like a bribe buck, each a haunch: I will
keep my sides to myself, my shoulders for the fellow
of this walk, and my horns I bequeath your husbands.
Am I a woodman, ha? Speak I like Herne the hunter?
Some idea has prevailed of an intention to cut down this celebrated tree, which it is much to be witted may not be true. The dell near it has in part been recently filled up”

Now clearly it seems Mr Ainsworth was familiar with the same additional details as Mr Ireland, however of course Harrison may have discovered the story of Herne being a disgraced keeper who took his own life in this book.

As for Ireland's claim that Herne was stalking Windsor Forest before Shakespeare put him in The Merry Wives of Windsor, that must be considered dubious. To begin with, he offers no sources for these claims, and as he was writing at the close of the 18th century, he is too far from the bard's day to be considered a contemporary source.

However what Ireland’s account does effectively prove is that by his era, the tale of Herne the Hunter had become a local legend, and there was even a particular tree said to be Herne’s Oak. And as we will discover, there has been a great deal of lore grown up around Herne post-Shakespeare. Here it seems we have a curious case of a fictional character becoming genuine folklore, and then returning to fiction later on... 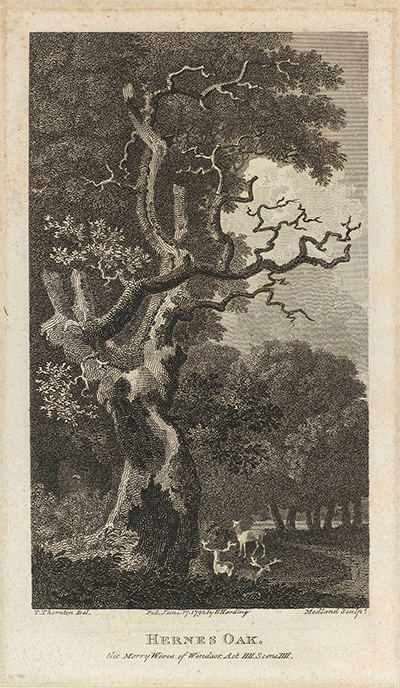