The Ghosts of Christmas Television Past

Poor old television has been blamed for many things over the years; killing cinema, encouraging juvenile deliquency, and the decline of cribbage as a popular pastime. And come the festive season, all the old-timers moan that now we just bloat in front of the flickering screen rather socially enage with our nearest and dearest. However in fairness, the old goggle box has actually absorbed, and indeed preserved, one old Yuletide tradition, and that is the telling of ghost stories upon a Christmas night.

Now obviouslv over the decades, myriad versions of A Christmas Carol by Charles Dickens have been produced, with countless incarnations of Scrooge being bedevilled by Mr Marley playing out in the corner of our living rooms. However one of the greatest authors of ghostly fiction, M.R. James also has a strong link with the televisual Yuletide festivities. Indeed, as we heard in the first part of Christmas Spirits, several of his eerie tales were written to be read aloud upon a Christmas evening, with the lights low, the fire banked, and the port doing the rounds. Of course the rise of the idiot lantern largely spelt the end of storytelling as a common social activity, but in England at least, the old tradition did continued, albeit in a new form, with various channels frequently reviving the festive tale of terror over the years, and often presenting us with adaptations of tales by the good doctor himself.

While we cannot hope to be completely definitive, in these pages we shall attempt to chronicle all the assorted televisual ghosts that have walked at Yuletide. So then, settle back in your favourite armchair and join me for a look at the spine chillers of Christman Past... WHISTLE AND I’LL COME TO YOU (1968)
Our journey begins, oddly enough with an edition of the BBC’s arts documentary show Omnibus screened at the most unseasonal time of the 7th of May 1968. Previously there had been other adaptations of some of James’ tales on both British and American television, however none of these had screened over the Christmas season. And none packed the wallop of ‘pleasing terror’ that the Omnibus film Whistle And I’ll Come To You did. Directed by Dr Jonathan Miller, this short has terrified legions of viewers over the eyars.

Based upon based on James’ Oh Whistle And I’ll Come To You My Lad, and starring the highly respected actor Michael Horden, this short film still stands up as one of the best of all the James adaptions and quite rightly regularly turns up with a respectable placing in most frightening moments countdowns to this very day. Beautifully shot in moody black and white, this teleplay captures the essence of M.R. James perfectly – the period setting, brooding landscapes, the suspect antiquities, and the learned fellow who falls afoul of malevolent supernatural forces.

Now you may be wondering why this piece aired as part of the Omnibus series – a show that usually featured documentaries on the arts. Part of the answer lies in the fact that this was an age in which television was becoming more experimental in general, but in the main, the reason is that Miller’s film is not just an adaptation of James’s story but also a critique of it at the same time. Miller has stated in interviews that he finds the gentlemen’s club atmosphere of the Jamesian tale, seemingly reeking of port and stilton, and populated by middle and upper class chaps, somewhat cloying.

And in the spirit of so many politically conscious sorts who were decrying the class system in the late ‘60s, often in spite the fact that they belonged to the same elite classes, he therefore chose to deliberately emphasise certain aspects of the story. Parkins, the lead character, is portrayed as the almost stereotypical upper class twit of the bumbling academic variety. He is shown to be self-absorbed and insulated from ‘real’ life by his scholarly and privileged background. And the haunting itself may be read as a psychological breakdown of this fusty, repressed fellow intead of an encounter with some dire spectral being.

And it is an approach that works marvellously, with the story operating on several levels at once seamlessly. And whether you favour the social/psychological interpretation or whether you prefer to take the piece straight as a traditional ghost story, it is equally effective either way. But in truth, the reason why this film works so well on multiple levels is less to do with Miller’s intelligent academic spin on the tale, but becasue of the elements that were actually already there.

Firstly, it should be noted that this blurring of psychological and supernatural events is already present in many of James’s tales. Miller may have thought he was doing something radical here, but in fact the “was it a ghost or something in his own mind” trope is a surprisingly old spin of the ghost story. Indeed as far back as the 1870s, Sheridan le Fanu was penning tales that offered the same options of interpretation, Green Tea being perhaps the famous example. And tellingly, James believed le Fanu to be the master of the supernatural tale, even in 1923 editing the definitive collection of le Fanu’s short weird fiction, Madame Crowl’s Ghost & Other Tales of Mystery.

Secondly, although a cursory glance at his biography may suggest that James was exactly the kind of crusty old scholar he so often wrote about, the truth is somewhat different. Although it is a fact that James never strayed that far from the halls of academia and was prodigiously erudite, Monty (as his friends knew him) was not some socially awkward fellow avoiding the wider world in a dusty bubble universe of books and monographs. He was in fact a keen traveller, a bicycle enthusiast, member of numerous clubs, and a lover of games of all kinds; in fact Monty was so gregarious, friends and colleagues were amazed how he found the time to conduct all his socialising and gaming and yet still pursue his academic works with impressive rigour.

In the light of this, one begins to realise that the bibliophile fogies and the stolid antiquarians that feature so often as his protagonists are not as Miller assumes, exercises in veiled autobiography, but are likely drawn from real people Monty encountered during his life. And it’s worth remembering that his tales were written to be read aloud to an audience of his peers, and hence there is a great deal of wit and humour in James’s tales. So it’s not a stretch to imagine that some of his characters would be in fact caricatures, subtley ribbing figures well known to his audience. It is also worth noting that if one reads Monty's original tale, the Parkin on the page isn't some doddery old don but a young chap - and undue absorption in academia isn't his sin, it is instead the arrogance of youth!

However, none of the above detracts from the film itself, and indeed Miller may be forgiven his ignorance of both the history of the ghost story and James himself as at the time legitimate literary attention had not been paid to either. Furthermore, it may be argued that in making Whistle And I’ll Come To You, Miller brought the work of James back into both the critical and the public consciousness, in much the same way Nigel Kneale’s BBC adaptation of 1984 elevated awareness of Orwell’s seminal political sci-fi novel.

And of course, it is a truly wonderful piece of film-making. Horden’s performance is simply superb and Miller’s direction is flawless, delivering beautifully composed shots that play with light and shadow, and scenes that are exceedingly uncanny. And seemingly, in blowing that ancient whistle Horden and Miller not only called forth that spectre with the “intensely horrible face of crumpled linen” but also a host of other malign spirits from the vasty deep... For one of the folks who saw it on original transmission was more than just frightened - he was inspired! That man was a director working for the BBC, Lawrence Gordon Clark, and Miller's adaptation gave him the idea for what would subsequently become the annual series A Ghost Story For Christmas... 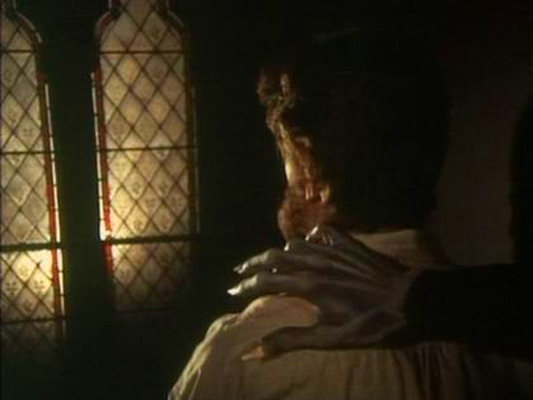 THE STALLS OF BARCHESTER (1971)
Lawrence Gordon Clark was so inpressed with Miller's production, he felt there was more mileage in adapting James for television. He worked out a script and secured the services of Robert Hardy, who was incidentally a fan of MR James too. A pitch was made to Paul Fox, then controller of BBC1. As we already notes this was an experimental age of BRitish television, and hence although Clark had only previously worked on documentary series such as Six Sides of A Square, Monitor and Horizon, Fox gave them a budger of £9000 and told them to go off and shoot it. Locations were scouted, primarily the cathedral close at Norwich, and Clark, aided by cinematographer John McGlashan, set to work on bringing another tale to the screen. And so, three years after the Miller teleplay, MR James returned to BBC 1.

But this time it was on Christmas Eve, and at 1025 PM viewers were treated to a new James adaption - The Stalls of Barchester Cathedral. It is is a wonderful version of Monty’s tale, with Clark perfectly presenting the tale of a clergyman troubled by some curious wooden carvings. Also, this production was shot in colour, which was used to brilliant effect to capture the turning seasons featured in the story, and showcasing the marvellously atmospheric location shoots in and around Norwich Cathedral. It also drew on the considerable expertise of the BBC drama department – for on televison at the time, no one did period pieces better than the Beeb. And so for a small budget production, The Stalls of Barchester still looks incredible.

Clark faithfully adapts the original story, but adding a rather fitting framing device which sees Dr Black played by Clive Swift taking over the reins the story and filling in for the unnamed narrator of the original text. Robert Hardy gives an inspired performance as the somewhat unscruplous Archdeacon Haynes, even managing to elict some sympathy for the character. Indeed Hardy made such an impression on viewers over the years that people mistakenly remember him appearing in several of A Ghost Story for Christmas episodes. However, as we shall see, ironically The Stalls of Barchester does feature several actors who would appear in more TV ghost stories at Yuletide - firstly the great Clive Swift, secondly David Pugh, who played Hayne's servant John, would pop again in A Warning to the Curious and The Ash-Tree, while Clark somewhat knowingly cast Ambrose Coghill, as the museum curator, for this gentleman had played the Colonel in Whistle and I'll Come to You, giving this production a rather neat link back to the Miller production.

The production was a great success, with viewers relsihing this serving of Christmas chills. Hence Clark was called back to produce another tale for the following year, and so the series A Ghost Story For Christmas was born. But furthermore, it would seem that Clark’s The Stalls of Barchester had hit some kind of cultural chord, for 1972 would turn out to be a bumper year for festive supernatural telly, as we shall disocer in the next page of our gazetteer of Yuletide spectres.