CHRISTMAS AND THE ROBIN

How A Little Bird Became an Icon of the Season 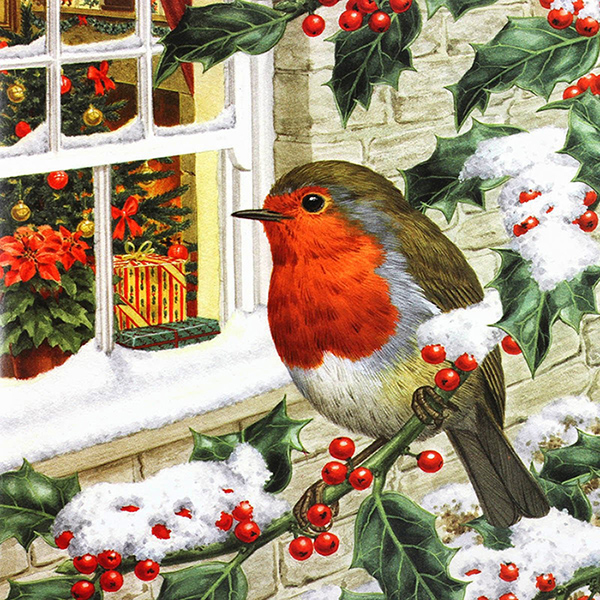 As a non-migratory species, robin redbreasts are found all the year round in the British Isles, although Highland robins will often travel a little way down south to escape the worst of the Scottish winter. However despite being a frequent visitor to our gardens all the year round, this little bird is inextricable entwined with the Christmas season.

And as we already seen in previous articles in this series, there is a great deal of folklore about the humble robin.We have already looked at their ominous reputation and connections to other folk beliefs, but there are also a many stories telling how this little bird came to get its distinctive redbreast.

In Wales the little bird has the name of brou-rhuddyn which mean literally ‘breast-burnt’, and there are is a Welsh folk tale that account for this. The story goes that Robin being an amicable little bird had took pity the sinners burning in Hell. And so he scooped up water in his beak and flew down into the pit of Hell. There, the brave and kind little bird took the water to the tortured souls to give them some respite for the eternal flames of damnation. However in doing so got his face and chest burnt red. And there is a variant version of this which has Robin taking water to the Pit with even bolder plans or extinguishing Hell itself.

Fire and the robin's kindly nature features in other such origin tales too. In an ancient Irish fable, when there was only two people in the world and only one fire, one day while the folk slept a wolf crept up and kicked earth on the flames to put them out. Seeing the fire dying, a brave little robin gathered up twigs and kindling and placed them on the embers, and then perched close by and fanned the embers back into flame with its wings. Hence once again Robin's kindness resulted in him getting burnt bright red!

In a story very similar to the Irish tale, we have our first festive folkloric link, with robins visiting the Nativity of Christ. In this story, after Jesus was born the night grew bitterly cold, the small fire in the drafty Bethlehem stable began to dwindle. Joseph ventured out the find more wood but while he was away gather winter fuel, the fire started to go out. However just as the flames started to die, a group of little brown birds flew into the stable and began circling the fire and fanned the flames once more. These compassionate little fellows were of course robins and to commemorate their kindness from that day onward they have sported bright red breasts. 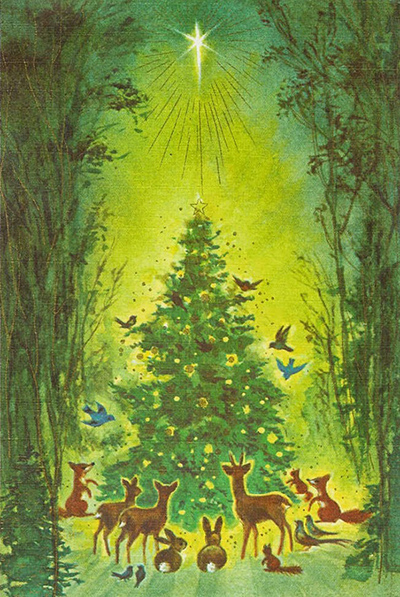 Another tale also links the bird getting its distinctive plumage with Christ too. This story comes in several variations but all feature the robin's traditional compassion and kindness. It was said that while Jesus was dying on the cross, the robin came to give him comfort. In one version the robin perches on Christ's shoulder and sings to give him comfort. Another variation has the little bird attempting to staunch the flow of blood from the great wound in Jesus's side made by the spear of the centurion Longinus. However the best known incarnation, has the kind little robin attempting to pluck away the crown of the thorns. And so in all three variants, the robin is stained with the blood of Christ and its kindness is forever remembered in it vivid red plumage.

These stories that associate the robin with Jesus have been mooted as explanations for why these little birds are part of our Christmas iconography. However all these tales are fairly obscure, and have never been exactly widely known. And hence scholars who have studied the development of Christmas customs believe the robin's link with the festive season comes from far more recent events. David Lack, author of The Life of the Robin (1972) traces our present day association of robins with Christmas from a modern Yuletide custom - the sending of Christmas cards.

Now you may think robins on Christmas cards merely comes from them their red plumage making them stand out in winter. And artistically speaking, this makes perfect sense, for their plumage makes them the perfect bird to adorn Christmas scenes. For aside from their redbreasts being appropriately festive coloured, the scarlet feathers also form a vivid contrast to the whites of the snow and the green sprigs of holly and ivy that usually adorn Christmas cards.

But the story further than that. In 1840, the United Kingdom established the modern Royal Mail and the first postage stamp, the Penny Black. And so the Penny Post was born, meaning letters could be sent anywhere to any corner of Britain for the princely sum of a single penny. And a few years later, one of the the fellow involved in designing the new postal scheme, Sir Henry Cole, had a capital idea. He hired artist John Callcott Horsley to design a card conveying Christmas best wishes, and thus the first Christmas card was born.

Now the early Christmas cards weren't exactly like the one we know today - for example, early designs had spring flowers rather than winter scenes.And furthermore, cards were just part of a range of Christmas themed stationary that flourished in what would be come the golden age of the postal service. Hence while folks on modest incomes would sending the usual cards we have, the more well off had envelopes, calling cards and paper for letter writing with illustrated headers. And a common feature of the matching designs on these festive stationary items was a robin, often with a letter in its beak. 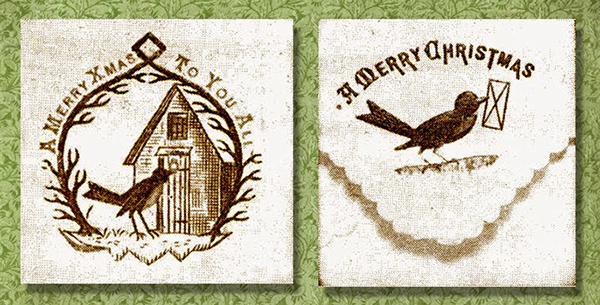 However somewhat curiously, the same robin designs also feature on cards and stationary celebrating for New Year and Valentine's Day. And the reason for this is that from the 18th century up until 1861, the British postman dressed in red coats or tunics. Even after a dark blue coat was introduced in 1861, the red was retained in on the collars, cuffs and piping on the coats, and the stripes on the trousers. Hence the humble postman had gained the nicknames 'redbreast' or 'robin'. For example, Anthony Trollope - who actually had worked for the Post Office - wrote in his novel Framley Parsonage, first published in 1860 -

"Oh, but it's mortial wet," said the shivering postman as he handed in that and the vicar's newspaper. The vicar was a man of the world, and took The Jupiter. "Come in, Robin postman, and warm theeself awhile," said Jemima the cook, pushing a stool a little to one side, but still well in front of the big kitchen fire. 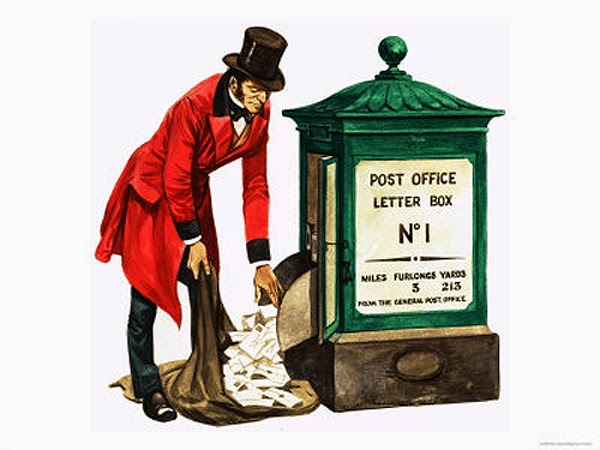 Naturally, with the whimsy typical of greetings card art, soon robins were regularly being depicted as postmen on various cards, even after the uniform changes detailed above. And with New Year and Valentine cards developing their own iconography, soon the robin redbreast would be left to rule the Christmas card alone. Furthermore, soon any kind of robin, whether undertaking postal duties or not, was seen as a suitable subject for a Christmas card.

And oddly enough, while the association with the Royal Mail which had got them onto the Christmas scene in the first place was forgotten as the slang name for postmen died out with the uniform changes, it has been the other folkloric associations of the robin that has kept them on our cards. For the custom of sending Christmas cards gained in popularity throughout Victorian and Edwardian times in parallel with the rise of the pantomime, and in previous articles we already seen how important the tale of the Babes in the Wood is to redbreast folklore.

More generally however, the robin of folklore fits perfectly with Christmas. Symbolically with their red feathers bringing colour and light to our frosty gardens, the robin parallels the joy and warmth Christmas brings to the middle of our winter. The ancient beliefs that they were omens and harbingers makes them a suitable magical bird for Yuletide, and the fact that we have long believed that both they are to be treated with kindness and that the robins themselves are compassionate birds means the redbreast is very much the embodiment of the real spirit of the Christmas season. 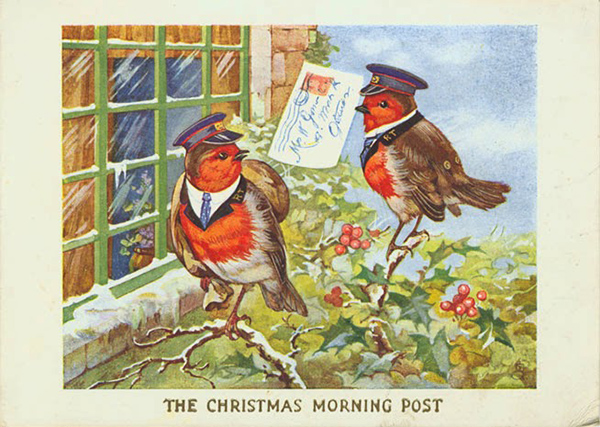