The Lost Feast of Michaelmas

An Autumn Celebration We Have Forgotten

When the leaves start changing and the nights begin to draw in, we know that Autumn is here. However in centuries past, the turning of the wheel of the seasons was more definitely marked in the calendar. Roughly coinciding with the solstices and equinoxes were four quarter days that heralded the beginning of each season, and for Autumn that day was Michaelmas. As may be deduced from its name, this was the feast day of St. Michael, one of the archangels, and the Lord's champion who led the heavenly host against Lucifer's rebellion. In some branches of Christian lore, Michaelmas was actually thought to be the date of that celestial battle - indeed there is this legend associated with that date and its connection to blackberries. And it is commonly thought that it was St. Michael's reputation as the champion of light that inspired the early church to set his feast day at a time of the year when the nights were going to be growing longer.

However there is a wealth of lore and tradition centred around Michaelmas that does not relate to that great war between the powers of Light and Darkness. Once upon a time, Michaelmas was a very important time of the year and was marked by many festivities, and thus it was for centuries. In fact, its decline only came in the 19th century, when there was a seismic shift from an agricultural to an industrial society. And now in the 21st century, it is only largely remembered as an odd name occurring in some official calendars - for example, many old schools and universities still refer to the first term of the academic year as the Michaelmas term.

Now over the years many of you may have wondered why the school year begins in September, and the reason for this is tied to the forgotten festival of Michaelmas. For the school year was modelled upon the university system, and to this day most university courses still begin at the close of September, usually literally just after Michaelmas. This in turn is derived from the church calendar (for the Church ran the first colleges and schools), and the academic year was chosen to begin then as Michaelmas marked the date of the last harvest. Now in ages past harvest was a most crucial time of the year: food had to be gathered in for the winter and the task of ensuring that all the crops were harvested, fruits and berries gathered, and livestock slaughtered, required everyone to muck in. Hence at harvest time, communities needed all their young folks helping out, not sequestered in dusty classrooms. So then the academic year was set to begin after these vital tasks had been accomplished. 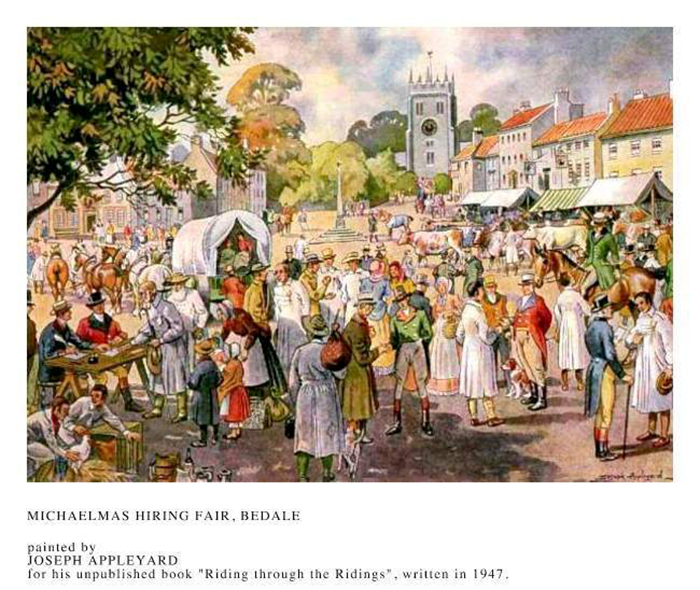 In a similar fashion, Michaelmas also saw the holding of what were called mop fairs. As the harvests were the end of the agricultural year, it was therefore now that contracts were renewed and that farms and estates looked for new employees. Therefore great fairs were held, often as part of the harvest festivities, where folks could tout for jobs. And the traditional way of doing so was to wander through the fair carrying something that signified your skills and profession; for example, shepherds would carry crooks, cowmen wisps of straw, and house maids would carry a mop. And hence, according to some, these gatherings were named 'mop fairs'. Although alternatively, some claim the name derives from tasseled tokens worn to signify different employers.

It was also the traditional day for elections, where communities would appoint public officials and leaders to guide them through the winter, with mayoral elections traditionally being held at this time in many places. Like the other quarter days, Michaelmas was also a date when tithes, taxes and rents were due. And this is tied to a once very well-known but now largely forgotten superstition. For centuries it was said that -

He who eats goose on Michaelmas day;
Shan’t money lack or debts pay

Even at the dawn of the 18th century, the belief was already so old that its origins had become obscure, as demonstrated by a query to the British Apollo on 22nd of October 1708 -

Pray tell me whence the custom'd proverb did commence, that who eats goose on Michael's day, shan't money lack his debts to pay?

Now firstly, there are a host of connections between geese and Michaelmas. In Shropshire for example, the shearing of the last portion of grain of the harvest was referred to as "cutting the ganders neck", while in other parts of the country Michaelmas is known as "Goose Day", with some places have celebrations known as "goose fairs". However a clue to the answer to the query above is to be found in an old Elizabethan text, in a poem by George Gascoigne written in 1575. In a verse about the quarter day feasts, Gascoigne wrote -

And when the tenants come to pay their quarter's rent,
They bring some fowl at Midsummer, a dish of fish in Lent,
At Christmas a capon, at Michaelmas a goose,
And somewhat else at New-year's tide, for fear their lease fly loose

Now the eating of goose at Michaelmas was more than a mere tradition; again it relates to the agricultural year. For after the crops had been harvested, geese were allowed to feed on the stubble. Therefore by Michaelmas the geese were as fat and well-fed as they were going to be that year, and so it was the perfect time to either sell or slaughter them. And therefore the goose fairs came into being, and the bird became the main course at Michaelmas feasts. Now going back to the paying of tithes and rents, in ages past it was a common practice to settle debts with goods, and therefore at Michaelmas a goose would often be offered as part of the payment. 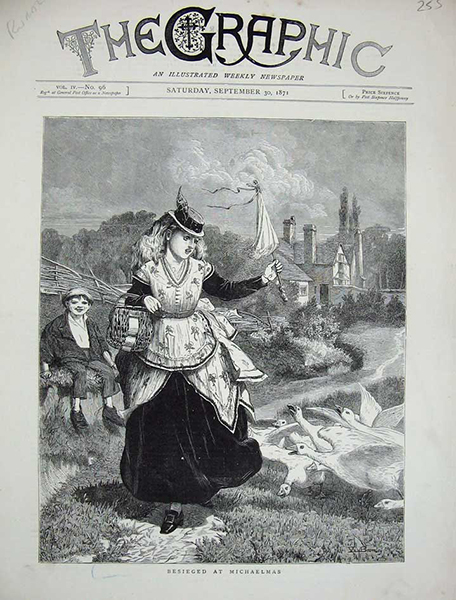 Now as to the origin of that old proverb, we may speculate that if you were tucking into a goose on Michaelmas Day, you were one of several groups. You might be a well-off fellow who had just had his rents or debts paid up in full, and now probably had many new geese. Alternatively you could be someone who had paid up whatever was they owed, but still had enough to acquire a big roasting bird for your own table. Thirdly, you may have been a farmer who'd had a good harvest and had plenty of livestock for the winter. Further down the social scale, you may have been been fortunate in the local mop fair, and traditionally, employers sealed the deal with the payment of a shilling. And in some cases, they would even pay your wages for the coming year in an advance lump sum. Therefore securing employment at the mop fair would normally mean you would be eating well on Michaelmas Day. In short then, if you had the cash for a goose on Michaelmas, that generally meant the coming year looked rosy.

Being tied to the harvest and the close of the agricultural year, for many folks Michaelmas was the real end of the working year. And hence in the British Isles, and in many parts of Europe, the bounty of the harvest was celebrated with feasts. While it has been forgotten now, a sign that the Michaelmas feast was an important part of calendar in ages past is evidenced by the superstitions and customs that grew up around it, many of which echo several of our Christmas feast traditions.

For example, in Ireland, special sweet pies were baked for Michaelmas, and it was traditional to hide a ring in one. To find a ring in one's Michaelmas pie was a sign of good fortune, much like getting the sixpence in a Christmas pudding. However thanks to the association between marriage and rings, to find a ring in your Michaelmas pie was a sign you would be wed in the coming year. And there was another echo of a Christmas superstition, the snapping of the turkey's wish-bone, found with the Michaelmas goose. It was said that if the bones of the cooked bird were brown, the coming winter would be mild. However white bones prophesied much snow and frost. And in Yorkshire, the condition of the meat itself held similar divinatory properties -

If the goose breast at Michaelmas be dour and dull We'll have a sour winter, from the start to the full

However despite once being a popular and important part of the calendar, the Industrial Revolution was to kill off the celebrations of Michaelmas. As factory work and urban life increasingly became the lot of the common folk, the old agricultural year and its traditions became less important. But while goose fairs and mop fairs still survive to this day, and Michaelmas still haunts academic and legal calendars, the great feasts and festivities at the end of September are now forgotten. However it is a tradition that perhaps should be revived, for as the nights draw in and the days grow colder, what better time to gather family and friends together for a slap-up roast dinner? 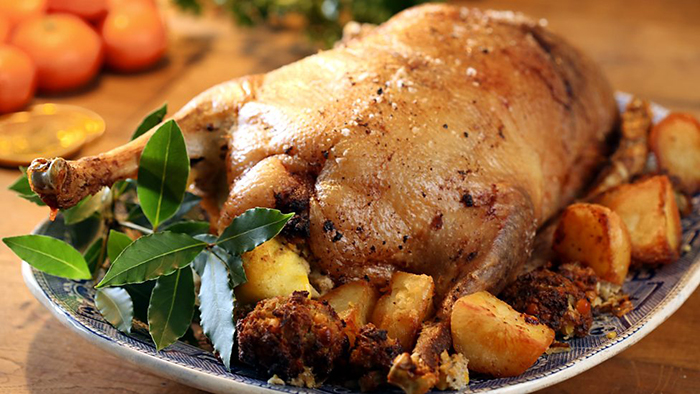