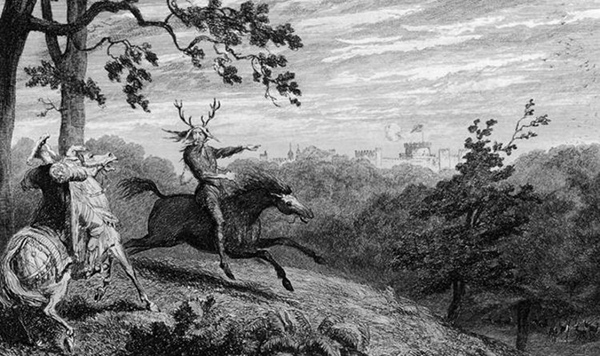 Lets begin with Mrs Walter Legge JP, who lived at Farm House, Windsor, heard Herne and his hunt several times. She had just gone to bed one night, when she heard the baying of hounds coming from the direction of Smith’s Lawn. It got louder and then seemed to head away in the direction of Windsor Castle. On another occasion, she heard the sounds on another night at midnight, but this time they were also heard by her daughter.

Another lady living at Windsor in the 1930’s claimed to have not only heard the hounds, but saw them running the open ground of the great park in the moonlight. While in 1947 a woman told the London Evening News that she had seen the shadowy figure of a rider on a horse in Windsor Great Park. On seeing her, the rider gave a maniacal laugh and then galloped off into the woods. The lady reports hearing the sound of a hunting horn not long after.

Elliott O'Donnell, the famous Ghost Hunter, had a report of Herne from the Dean of Windsor. In the autumn of 1936, O’Donnell asked if he had heard anything of Herne. The Dean’s reply was as follows -

“I can tell you that two Eton College boys are rumoured to have heard Herne’s Phantom Hounds, on their way back to the school one evening not so very long ago. They were in the Park when they heard the distant baying of hounds and the sound of a horse’s hooves careering madly over the ground. They looked in the direction of the sounds but could see nothing to account for them. The sounds kept drawing nearer to them, and they were distinctly conscious of the rush of many feet past them, accompanied by a cold current of air. That is the story the boys are alleged to have told on their arrival at the College.”

And there are other reports from Eton too. Mr Evan Baille, the father of Lord Burton, who died in May of 2013, heard the hunting horn and the baying of the hounds when he was at Eton.

In 1962, another group of lads from Eton had an encounter with the spectral huntsman. While out playing they are alleged to have found another huge hunting horn in the great park one night. Boys being boys, they couldn’t resist blowing it. BUt imagine their surprise when their call was answered by another horn, followed by the sounds of hounds baying nearby. Then out of the woods, leading his hunt, Herne himself appeared, riding on a great black horse. Needless to say, the boys threw down the horn and ran for their lives. 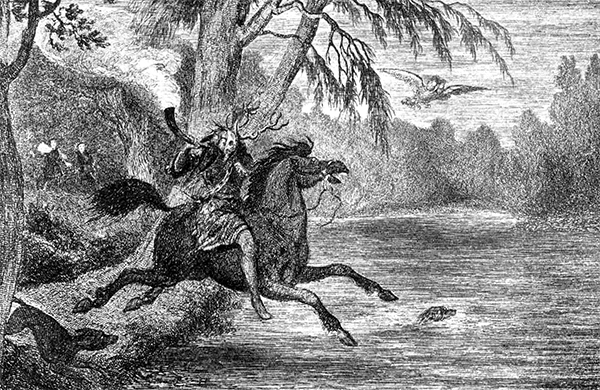