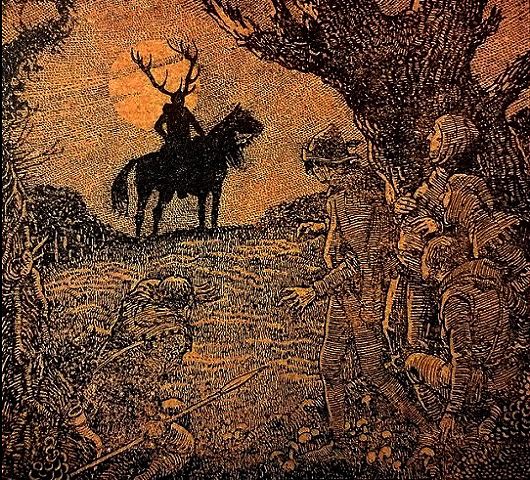 In 1976, Fortean Times reported an incident with sounds like the Hunter too. On the night of 22nd September, a 19-year-old Coldstream Guardsman, who was on duty overlooking a sunken garden in the grounds of Windsor Castle, saw something which frightened him so much he collapsed. He swore to hospital doctors that a statue of a man had suddenly come to life before his eyes and sprouted antlers and chains.

However the most sinister tale comes from noted folklorist R L Tongue. Allegedly at some point in the 1950s a Teddy boy and two other lads were messing about in Windsor Park, breaking down small trees and generally being a nuisance. However, the ted came across a hunting horn lying on the ground. As you have no doubt guessed, the lad couldn't resist blowing it. And then, a loud noise sounded in the trees and the baying of hounds followed. The ted and his mates legged it, and made for a local church, figuring they could shelter or hide inside. As they neared the church, the Teddy boy stumbled, and the others heard the sound of an arrow in flight. Looking round, they saw him drop down dead. No sign of hounds, hunter, or an arrow were ever found…

It is interesting to note that all these reports come from the 20th century, but in more recent times sightings of the spectral hunter seem to have somewhat tailed off at the start of the 1980s. And I don't think that it is a coincidence that reports of Herne seem to die off around the same time he begins to appear in fiction again, but as an ancient pagan god. Growing up in the 1970s, I first read about Herne in books about ghosts and folklore, however if you ask younger folks, most I'd wager would tell you he's a mythic figure from old British paganism.

However his origins are still a mystery, unless some new ancient texts come to light we will never know if he was a ghost from Windsor forest folklore or the invention of the bard of Avon. And while for centuries he seemed content to remain a reference in a Shakespeare play, it appears he grew restless in the 19th century, and stepped into other tales, into novels and dramas, and in the course of the 20th century ascend from being a mere woodland spectre to a full fledged forest divinity. It is unlikely he will dwindle into obscurity any time soon, especially as Masefield's Box of Delights is being rediscovered as a Yuletide classic, and seems to be growing in popularity every year. And so, I think we can count on being invited into Herne the Hunter's wild wood for many Christmases to come. 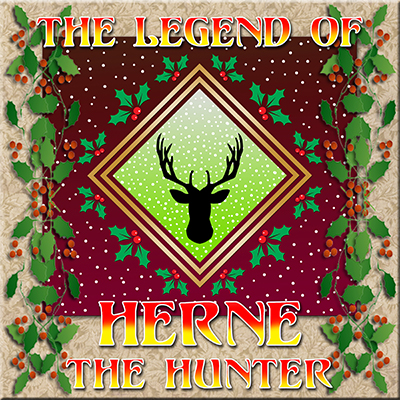