Ainsworth's origin for the supernatural huntsman, Herne the Hunter, is largely of his own invention. And while he was drawing on authenic lore, the actual folkloric sources for Herne are somewhat slight. Indeed scholars have identified a single source text, a passage in a book by Samuel Ireland published in 1792 - Picturesque Views on the River Thames. And in this tome, Ireland has the full lowdown on Herne -

The north terrace of this castle was greatly improved by Queen Elizabeth, who added to it many buildings, which are easily discernible by their style. She frequently graced this walk with her preference about the hour of noon, and is said to have directed the planting of that row of trees, near the Queen's Lodge, which bears her name. Not far from this place are the remains of that venerable tree, known by this name of Herne's Oak, which has been immortalized by our divine bard Shakespeare in his Merry Wives of Windsor. He makes Master Page thus describe this tree and the keeper of the forest :
There is an old tale goes, that Herne the hunter,
Sometime a keeper here in Windsor Forest,
Doth all the winter time, at still midnight
Walk round about an oak with great ragg'-d horns;
And there he blasts the tree, and takes the cattle;
And makes milch-kine yield blood, and shakes a chain
In a most hideous and dreadful manner.

And so here we have the main sources for the Herne legend - the real bones of the case so to speak - and they are the quoted passage from The Merry Wives of Windsor plus the additional remarks made by Mr Ireland. So firstly let's examine the account left by the Bard. Now to begin it must be noted that our knowledge of the details of William Shakespeare's life and career is very scant indeed, and hence we only have guesstimates on when he wrote most of his plays and when they were first performed.

Now according to 17th century sources, it was claimed that The Merry Wives of Windsor was written as Queen Elizabeth I requested the Bard of Avon to write her a play, and furthermore Will did so in a mere fortnight! However as this story was first recorded many decades after Shakespeare's death, its provenance is dubious.

However we do know that what is considered to be the complete text was first published in the First Folio in 1623. A more suspect and corrupt version had appeared in what Shakespearian scholars dub the False Folio published by William Jaggard in 1619. However the earliest publication was in 1602 in what's termed a bad quarto edition by printer Arthur Johnson. And so considering this, plus some references in the text itself, scholars reckon the play was most likely written in the 1590s.

But what is a bad quarto? Well, essentially they were illegal editions of Shakespeare's plays. The pirate versions were produced in several ways - either produced by a wily audience member transcribing the play, as it was performed or later from memory - a bootleg edition if you will. Or they were created by using copies of the actors' scripts - the Shakespearian equivalent of getting a work print or a screener.

And their dodgy provenance is clear from the fact that these editions feature missing or shortened scenes and mangled dialogue. However sometimes they do throw up something interesting. For the bad quarto edition of The Merry Wives of Windsor gives us an alternative version of the Herne passage -

Oft haue you heard since Horne the hunter dyed,
That women to affright their litle children,
Ses that he walkes in shape of a great stagge.
Now for that Falstaffe hath bene so deceiued,
As that he dares not venture to the house,
Weele send him word to meet vs in the field,
Disguised like Horne, with huge horns on his head,
The houre shalbe iust betweene twelue and one,
And at that time we will meet him both:
Then would I haue you present there at hand,
With litle boyes disguised and dressed like Fayries,
For to affright fat Falstaffe in the woods.

Now it is interesting to note that here Herne is dubbed Horne, and we have the alternative gloss that Herne is a local bogeyman. Now it has been much debated whether this bad quarto comes from an early draft of the play or was just an error ridden pirate. Certainly it would be very easy to transpose a vowel and go from Herne to Horne. Likewise, you could imagine Shakespeare going the other way, starting with the name Horne and feeling it to be a little too on the nose for an antlered ghost.

Whatever the truth, it is interesting to note that in the earliest version of the legend, Herne is not some pagan god or forest sprite, but a ghost. Admittedly a somewhat terrifying one, but just a spectre nevertheless. And it also brings us to an important question - was Shakesspeare incorporating an existing local legend or was the story of this fearsome ghost the product of his own imagination? 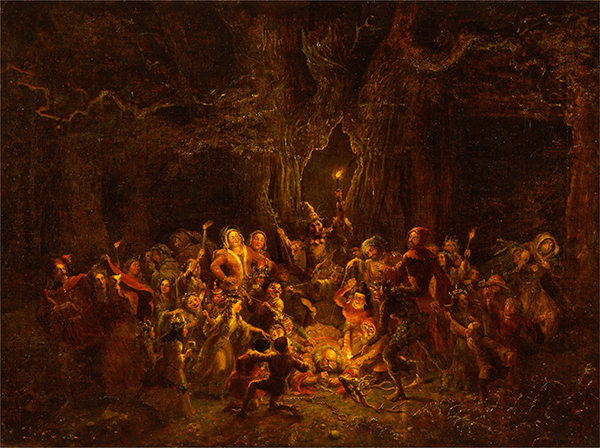