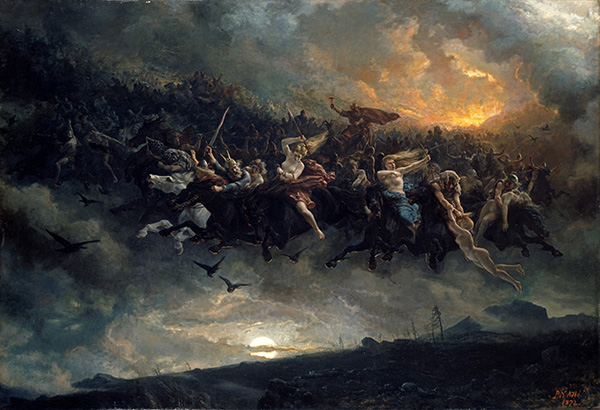 As we heard when discussing The Dark is Rising, Herne has long had an association with The Wild Hunt. Now then, as many of you I'm sure will know, the Wild Hunt is a folkloric tale that is widespread all across Europe with many local variations, and has even got equivalents in the USA and Canada. Basically the Wild Hunt is a host of spectral figures, either warriors or huntsmen who fly through the night sky accompanied by baying hounds and sometimes owls, imps, and demons. Here is an account of such a phantom hunting host recorded in the Peterborough Chronicle in 1127 -

Let it not be thought remarkable, when we tell the truth, because it was fully known over all the country, that as soon as he came there ... then soon afterwards many people saw and heard many hunters hunting. The hunters were black and big and loathsome, and their hounds all black and wide-eyed and loathsome, and they rode on black horses and black goats. This was seen in the very deer-park in the town of Peterborough, and in all the woods that there were between his town and Stamford, and the monks heard the horns blow that they were blowing at night. Trustworthy people noticed them at night, and said that it seemed to them there might well be about twenty or thirty hornblowers. This was seen and heard from the time he came there all Lent up to Easter.

There are many variations of the wild hunt, sometimes it's said they are roving abroad hunting down evil spirits and sinners, while other versions have been as demons themselves pursuing lost souls or even looking to hunt down any passing mortal they encounter. A sighting of the Hunt is often a portent of misfortune, sometimes even death. Furthermore, they were often associated with stormy weather, and many traditions state that the Hunt rides in wintertime, particularly around Christmas.

In a similar fashion, different traditions and regions give the Hunt different leaders, norse gods odin aka wotan amd woden, the angel gabriel or the devil himself. Sometimes it is some local figure, usually a prominent sinner - in Germany it said to one Count Hans von Hackelnberg, doomed to ride forever after hunting on a Sunday, while in Cornwall the hunt is headed up by Jan Tregeagle, a wicked magistrate from Bodmin Moor. Even more confusingly, sometimes it's legendary heroes who lead the hunt, Charlemagne, Frederick Barbarossa or King Arthur. And despite hunting traditionally being a male pastime the hunt has female leaders too, norse goddess Freya, Roman goddess Hecate, germanic goddesses Holda and Perchta.

Now the reason the Wild Hunt is so diverse is because it is in fact merging several strands of folkloric tales under one umbrella term. It was created by Jacob Grimm in his groundbreaking work Deutsche Mythologie, published in 1835. However in conceptualizing the Wild Hunt, Grimm did amalgamate several separate traditions under the banner of the Wild Hunt, and again it is only recently that scholars like Claude Lecouteux and Ronald Hutton have started to untangle them. The current thinking is that the wild hunt includes processions of the dead, legends of doomed or damned huntsmen, and finally groups of female spirits who gathered at night led by a goddess figure. Hence the Wild Hunt features such a diverse cast and varies so much in nature.

It was also Jacob Grimm who postulated that Herne the Hunter might be a figure related to the Wild Hunt, including him in his roundup of spectral hosts, riders and huntsmen. And other writers on mythology and folklore followed suit. For example, in 1929, writer R Lowe Thompson in his book The History of the Devil, linked Herne to both the Wild Hunt and Cernunnos. Not long after, and an immediate influence on Carpenter and Cooper, was the poet Robert Graves. In his fascinating treatise The White Goddess, published in 1948, he mentions Herne several times and, as is common in that work, finds all manner of connections to different mythological traditions -

For the northward migration of wild geese is connected in British legend with the conducting to the icy Northern Hell of the souls of the damned, or of unbaptized infants. In Wales the sound of the geese passing unseen overhead at night is supposed to be made by the Cwm Annwm ('Hounds of Hell' with white bodies and red ears), in England by Yell Hounds, Yeth Hounds, Wish Hounds, Gabriel Hounds, or Gabriel Ratchets. The Hunter is variously called Gwyn ('the white one') - there was a Gwyn cult in pre-Christian Glastonbury - Herne the Hunter, and Gabriel. In Scotland he is Arthur. 'Arthur' here may stand for Arddu ('the dark one')...Satan's name in the Welsh Bible. But his original name in Britain seems to have been Bran.

Now just as an aside, I must say I find the oft proffered explanation for the Wild Hunt being the sound of geese somewhat improbable! I know geese are surly ,noisy buggers at the best of times, but impersonating demonic riders on horseback and hellhounds seems a bit of a stretch, even for them!

Anyhow, back to Herne… Now neither of our primary sources, Shakespeare or Samuel Ireland link Herne with the Wild Hunt. However by the time Graves was writing, there was a strong link between Herne and the Wild Hunt, thanks to Grimm and all those later scholars who embraced the Wild Hunt umbrella. However Herne’s story has a few more twists and turns, and starts to get a little strange… 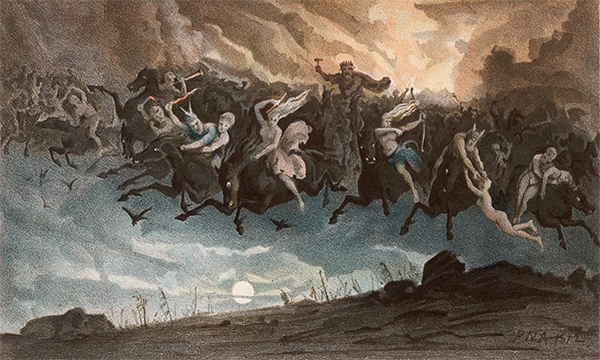