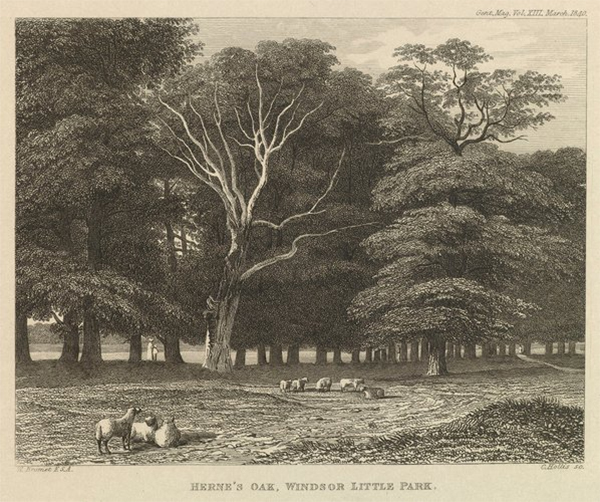 Now whether or not the Merry Wives of Windsor was written for Queen Elizabeth I, the British Royal family certainly seems to have taken Herne under their wing as their own ghost. And as Ireland mentions, Herne's Oak was something of a cherished landmark, despite there being some confusion over the years as to which oak it was.

As far as I can tell, the history of Herne’s Oak is as follows - there was a tree north of Frogmore House in the Home Park that was an early candidate. However this was felled in 1796. But another Windsor oak, the one in the avenue mentioned by Ireland, was also reckoned to be the authentic tree. However this was blown down on 31st August 1863. But, so beloved was the legend of Herne, that a new tree was planted on the same site by Queen Victoria. However this too was removed in 1906 when the avenue was replanted. Hence now there is another tree in the avenue that has inherited the mantle of Herne’s Oak! Perhaps these days, considering this tangled history of replacements, we should be calling it Herne’s Trigger's Broom!

However where things get strange is that we have a legion of stories relating encounters or sightings of either Herne or the Wild Hunt at Windsor. To begin with, a new addition to the legend sprang up at some point in the 19th century which claims that Herne appeared as an omen of a great disaster. Allegedly he was seen just before the Great Depression in 1931, with a white stag ghost and the ghostly form of the blasted oak. And he appeared again on the eve of the Second World War in 1939, before the abdication of Edward VIII in 1936, and once more on the death of George VI in 1952.

And indeed, as the legend of Herne the Hunter has grown throughout the 20th century, a great many retrospective manifestations have sprung up. While there is no historical sources or evidence for these claims, it is now part of the Herne story that he appeared before the death of Richard II, was seen several times by Henry VIII and appeared before the execution of Charles I.

However while these portentous sights are extremely anecdotal, if not outright embroidering of the folklore, where things get very curious is that we do have actual reports from named witnesses of encounters with Herne the Hunter. And as we are entering the Christmas seasonal it's only right and proper to tell some of these real life ghost stories! 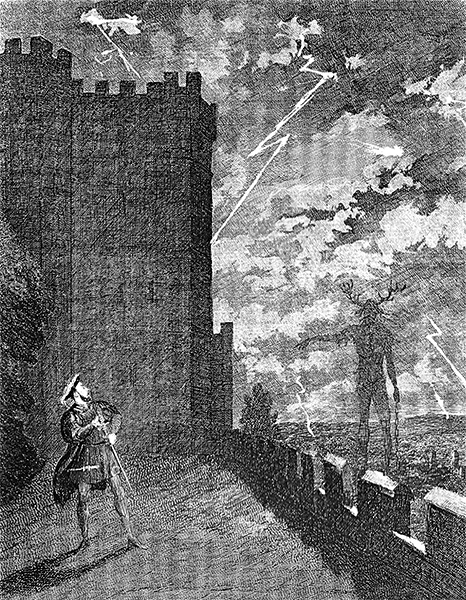