The Strange Saga of The Landmaster from Damnation Alley 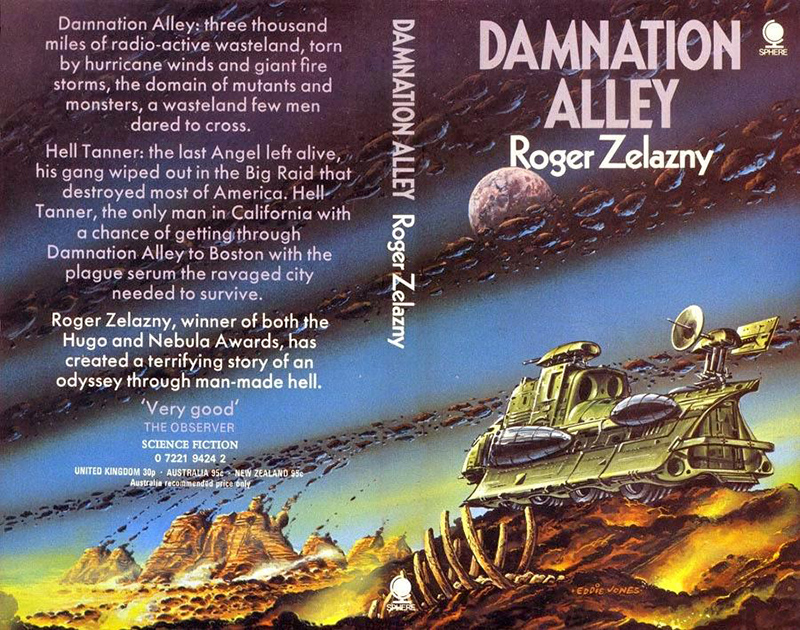 from Damnation Alley by Hawkwind

Hello again dear fiends! Welcome once again to the 'Orrible 'Ouse of Terrible Old Tat! Now as listeners to my podcasts and readers of my scribbling will be aware, I am very interested in the origins and roots of things, in particular seeing how different concepts or tropes evolve over time in the steaming jungles of pop culture. And this week dear friends, we have a very interesting family tree to trace, with some branches bearing prized fruits and others... Well, others not so much. Anyhow, in accordance with the wise words of Maria Von Trapp, let us start at the very beginning... as it's a very good place to start!

In 1967, the star feature of the October issue of the famed Galaxy Magazine was a novella by SF legend Roger Zelazny. Now back then old Rog was still a young gun in the world of fantastic fiction, only a few years into his remarkable career, and his now classic novel Lords of Light had only just been published earlier that year. Now that novel would scooped him several awards, however the novella published in October would also bag him a Hugo too. This short work was Damnation Alley, a thrilling post apocalyptic tale set in a world ravaged by nuclear wars. Indeed the story went down so well, Zelazny later expanded into a novel that was published in 1969.

The plot line of both versions is the same - in the post-nuke America, there is no more United States, just some separate enclaves holed up against extreme weather and deadly radiation. However the Boston area has fallen victim to a deadly plague and while a cure has been found, unfortunately the vaccine is in California. Constant hurricanes and freak weather make air travel impossible, and hence the job of taking the vital vaccine over land through the wasteland of America, now dubbed Damnation Alley, is given to former biker and convicted killer Hell Tanner (and yes, that is his real name) on the condition that if he makes it, he will receive a full pardon.

Zelazny's novel became one of the great influences on post-apocalypse fiction. Countless books, comics and films drew inspiration from his vision of a nuked world filled with radioactive hazards and marauding mutants. And it is still a huge influence to this very day - for example, the video game series Fallout owes a great deal to Zelanzy's book, with the Lonesome Road add-on being very much a homage to it. In fact, much like Day of the Triffids, it has been pillaged so much over the intervening decades that new readers approaching the book now sometimes find it somewhat cliched, as it has been so thoroughly mined by other works. Indeed between Zelazny and Wyndham, they pretty much wrote the entire playbook for post-apocalyptic worlds.

However one element that has become something of an influence in itself is Tanner's mode of transport. For to traverse a country full of extreme storms, mutated animals, and feral savages, Tanner is given a special vehicle, whose description I will now quote -

There were no windows in the vehicle, only screens which reflected views in every direction, including straight up and the ground beneath the car. Tanner sat within an illuminated box which shielded him against radiation. The “car” that he drove had eight heavily treaded tires and was thirty-two feet in length. It mounted eight fifty-caliber automatic guns and four grenade-throwers. It carried thirty armor-piercing rockets which could be discharged straight ahead or at any elevation up to forty degrees from the plane. Each of the four sides, as well as the roof of the vehicle, housed a flamethrower. Razor-sharp “wings” of tempered steel – eighteen inches wide at their bases and tapering to points, an inch and a quarter thick where they ridged – could be moved through a complete hundred-eighty-degree arc along the sides of the car and parallel to the ground, at a height of two feet and eight inches. When standing at a right angle to the body of the vehicle – eight feet to the rear of the front bumper – they extended out to a distance of six feet on either side of the car. They could be couched like lances for a charge. They could be held but slightly out from the sides for purposes of slashing whatever was sideswiped. The car was bullet-proof, air conditioned, and had its own food locker and sanitation facilities. A long barreled .357 Magnum was held by a clip on the door near the driver’s left hand. A 30.06, a .45-caliber automatic, and six hand grenades occupied the rack immediately above the front seat.

Nice ride or what? And of course, Tanner's "car" would go on become the usual cover star of any cover art for the novel, as you can see above. Plus it would go on to inspire whole generations of post-apocalypse vehicles too. But more about that next week...

Anyhow, perhaps inevitably, around a decade later it was decided to make a movie of this seminal SF tale. Featuring a bleak vision of the future coupled with lots of action and a tough anti-hero, Damnation Alley seemed to fit right in with the cinematic SF of the time, the era that gave us flicks like Soylent Green (1973) and The Omega Man (1971), plus the franchise that dominated the early '70s Planet of the Apes (1968) and its sequels and spin-offs. Indeed initially allocating the film a massive $17 million budget and putting Jack Smight, the man who helmed the seminal disaster movie Airport '75 in charge, showed that 20th Century Fox was looking to make a quality production to follow in the footsteps of the movies mentioned above. 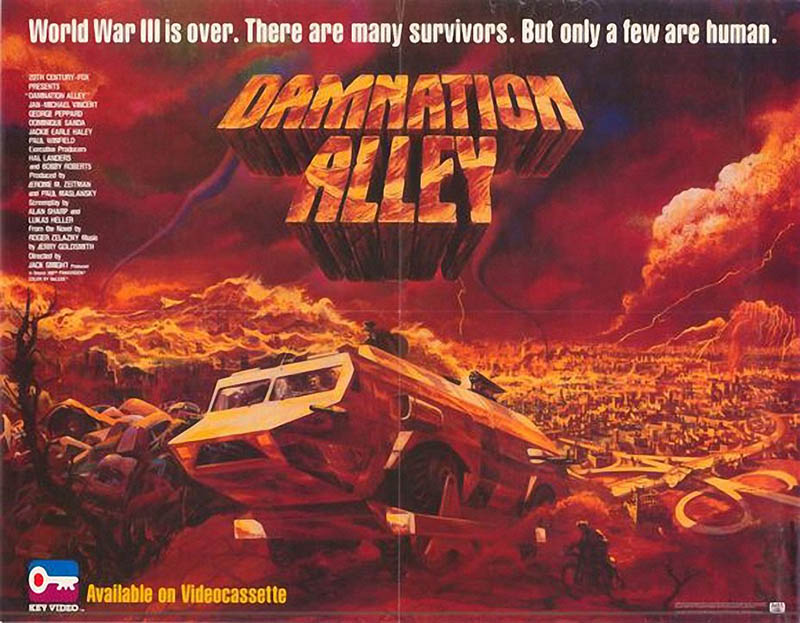 But things didn't quite work out that way. The production was troubled, with the budget being cut, the shooting script - that was fairly faithful to the novel - being pared down and then changed, poor Jack Smight was pretty much chucked out of the director's chair, and the movie ending up being radically recut. Hence the plot line of travelling from coast to coast to deliver a serum vanishes, and instead they are just heading out to find other survivors. The novel's anti hero Hell Tanner pretty much vanishes too. Instead we have a Jake Tanner, played by Jan-Michael Vincent in his pre-Airwolf days, who is a far more respectable former USAF lieutenant, and is reduced to something of a sidekick for George Peppard's Major Denton. But most damaging of all, Zelazny's visions of a tortuous journey through a radiation wasteland end up being some dodgily coloured in skies, a few badly matted scorpions, and a lot of driving about in the same bit of desert.

Let's make no bones about this, the movie Damnation Alley (1977) is pretty bad. OK, I know some of you may have fond memories of this flick having seen as little kids, and I'll not begrudge you your nostalgia - I'm immensely fond of loads of tatty old movies. I like Zoltan Hound of Dracula for Pete's sakes! But all the same, it is still a shame the movie isn't better, for Zelazny's book is just crying out for a faithful big screen adaptation.

However in fairness, the film does get one thing right - the realisation of Tanner's "car". Indeed, the movie actually brings something new to the table here - for Zelazny somewhat missed a trick in not giving Tanner's ride a cool name, whereas the movie makes the genius move of actually dubbing the super duper armoured vehicle, the Landmaster! And you got to agree that is the perfect name. And while one wonders where all the money went when looking at dull bits of desert shot through coloured filters, when the Landmaster is rolling out you can see the dollars up there on screen. Now the design does diverge from Zelazny's description: this Landmaster does have windows, and sadly lacks most of the weaponry, but in fairness, all the cover art versions take similar liberties too. But the important thing is the Landmaster as a vehicle still looks very very cool indeed. 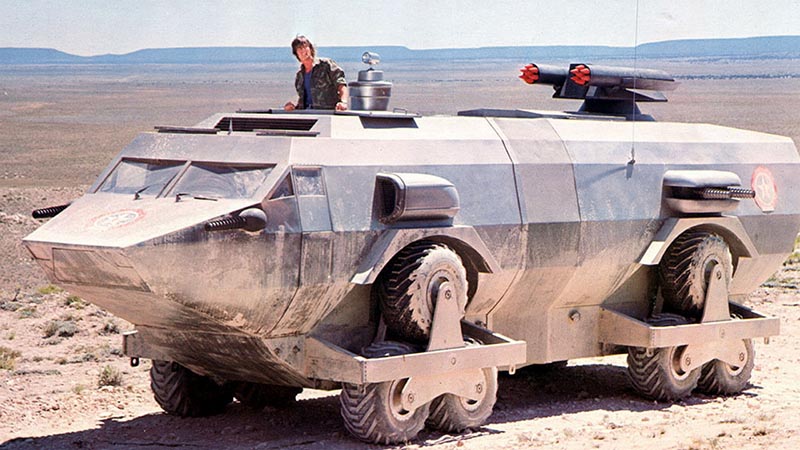 And indeed, I think it's fair to say that just as the Damnation Alley movie has a cult following, the actually Landmaster itself has a cult all of its own. Despite fumbling nearly all other aspects of the production, 20th Century Fox did get the Landmaster right. And they recognised that this iconic vehicle was the real star of the movie, with it appearing a lot in the promos and press for the movie's launch. For example, the magazine Popular Science even did a piece on it in the March 1977 issue - which you can read here. Mind you, as the Landmaster was custom-built by top custom-car creator Dean Jeffries - who designed iconic vehicles such the moon buggies in Diamonds Are Forever, the Monkeemobile and the Green Hornet's Black Beauty - for a cost of $350,000 - or according to my calculations, $1,522,544.14 in today's money - you can understand why it was at the forefront of the publicity!

Now oddly enough 20th Century Fox had another little SF film on the go at the same time as Damnation Alley was being made, but they had little faith in it. In fact they were banking so much on Damnation Alley being a huge blockbuster, they let that other little movie's director keep all the merchandising rights. Fast forward to a year later however and that other little movie - called Star Wars, you might have heard of it - was still packing them in and the shops were awash with merch. Damnation Alley on the other hand... Well, put it this way, there was never a toy version of the Landmaster to buy...

...Or was there?!? I'll meet you in Part II to discovery the strange truth!