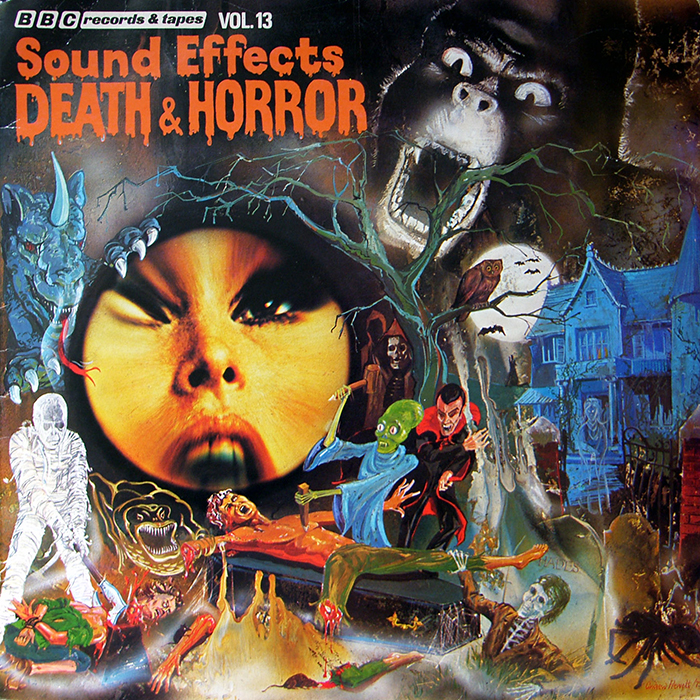 This article on is also available in audio form as a podcast!

Now then last time in the 'Orrible 'Ouse of Terrible Old Tat, we had wheeled out the ancient gramophone (ask your parents kids!) and had a delve into the wonderful world of BBC Sound Effects records. We reminisced about the classic first platter of SF sounds conjured by the BBC Radiophonic Workshop BBC Sound Effects Vol. 12 Out of This World, but this wasn't the only vinyl treat that is fondly remembered by genre fans. And the next addition to the series, appropriately enough Volume 13, was a disc that was to become infamous!

For the next in the range, unleashed on unsuspecting record shops in 1977, was entitled Sound Effects Vol. 13 Death & Horror! The suitably gruesome cover art was created by Andrew Prewitt, who was actually the Head of Creative Services at BBC Records & Tapes, and by his own admission he went for the most lurid images he could possibly get away with back then. The record itself served up a whopping 91 different gruesome sound effects, with classic tracks such as "Red Hot Poker in Eye" and "Dr Jekyll's Laboratory". Weirdly enough none of these ever stormed the singles chart...

Much like its SF-themed predecessor, this infamous vinyl was divided up into handy themed sections. We open with Execution and Torture, featuring easy listening greats such as "Neck Twisted and Broken" and "Nails Hammered into Flesh", and then we move onto Monsters and Animals, which brings us soothing sounds such as "Mad Gorilla" and "Hellhound (Growling and Snarling)". Moving on, next we have some excellent chillout sounds for the busy maniac in the shape of Creaking Doors and Grave Digging, (featuring "Grave Digging (Stony Ground)" and "Grave Digging (Wet Ground)", while the following selection, Musical Effects and Footsteps delivers classics such as "Phantom of the Opera (Organ Sounds)" and "Ghostly Footsteps (With Chains)". The LP next brings assorted ululations for your delectation, with Vocal Effects and Heartbeats, offering smash hits like ("Three Men Screaming" and "One Long Scream (Female)". And finally this blood-drenched platter closes with Weather, Atmospheres and Bells (surely a band name waiting to happen), which serves up ambient classics such as "Midnight in the Graveyard" and "The Electronic Swamp".

The full tracklisting is as follows! 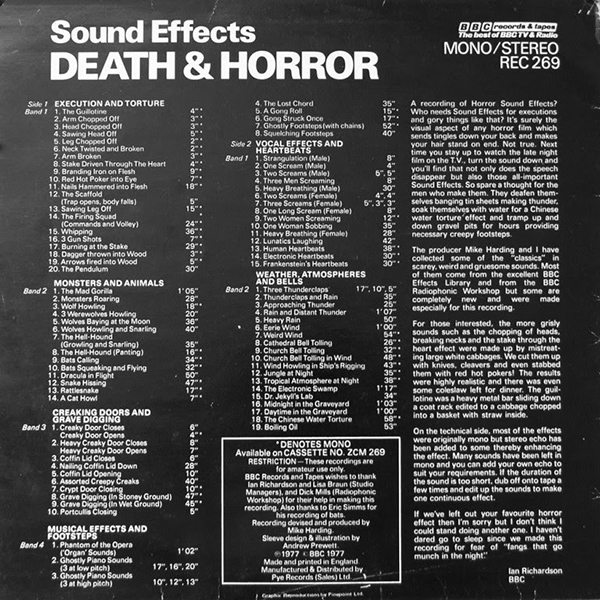 Interestingly a few of the tracks on it were real field recordings, although sadly "Dracula in Flight" wasn't actually taped in the wilds of Transylvania. But the tracks showcasing the sounds of bats were recordings of real creatures done by Eric Simms. However the bulk of the LP was down the ingenuity of the sound effects wizards. Helmed by Mike Harding (no, not the comedian/folk singer of the same name sadly), a veteran producer and engineer at both the Beeb and the Radiophonic Workshop, the more gruesome sounds were conjured up thanks to some ordinary kitchen implements and tactical violence against vegetables. I vividly remember seeing assorted boffins turning up on several popular TV shows and demonstrating how they made all these delightfully ghoulish and gross sounds.

Certainly it was very impressive that you could make such hideous noises with ordinary kitchen implements and the week's groceries. And if you want to see this kind of thing in action, you can see a whole variety of horror sound effects being created in the exact same way in the movie Berberian Sound Studio which I reviewed on my podcast a while ago (on this episode here).

The record proved to be a massivce success. However not everyone was happy. For while most people thought it was hilarious that there was now an LP where you could hear classic cuts like "The Scaffold (Trap Opens, Body Fall)s" or "Sawing Leg Off", of course there were a few who were predictably outraged and worried about the nation's yoof grooving to the sounds of "Branding Iron on Flesh". Andrew Prewitt recalls...

It was an amazing success and took us all by surprise, some press featured it and the then self-appointed guardian of British morals sent a very strongly worded letter to me suggesting that I was corrupting the minds of young people with evil images. Sad to say it only fuelled the sales and further records followed!

And so, despite the complaints from the likes of Mary Whitehouse, this LP would prove to be a great favourite with monster-obsessed kids everywhere, and many folks have fond memories of scaring themselves daft playing these tracks over and over again. Of course these days, copies of the original release are highly prized, and go for a pretty penny. However last year, it was re-issued by Demon Records, and on 180g blood splattered vinyl too!

But back in the day, this record sold so well that the BBC would issue, not one, but two follow-up LPs. And next time dear fiends, we'll be giving them a spin to see what they contain.