RISE OF THE FIENDISH FEET

When Yogurt Went For a Spooky Stroll 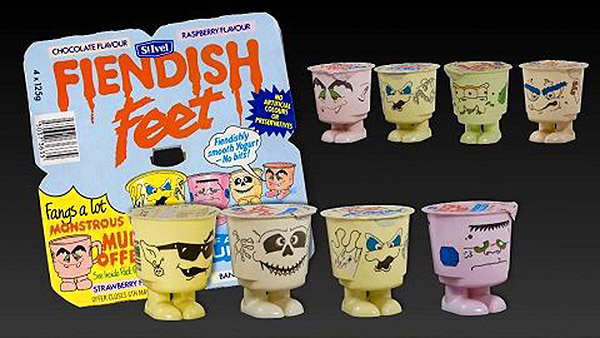 Welcome back dear fiends to the 'Orrible 'Ouse of Terrible Old Tat! Now then when scholars of the scary gather together and talk of horror themed tat aimed at kids, generally the 1970s and early 1980s steal the limelight. Conversations revolve around spooky snacks such as Horror Bags crisps, Mummies sweets, and Haunted House lollies. However in 1989, several strange creatures waddled into our fridges and would haunt chiller cabinets throughout the '90s - the dreaded Fiendish Feet!

No one really knows where these bizarre creations came from - were they the result of some cheap charlie fuelled meltdown in a marketing office kitchen? Did some bright spark reckon they could create the dairy equivalent of the popular and long-running snack Monster Munch? Or were they merely the product of some boffin announcing that plastic moulding had advanced to a point where you could make yogurt pots with feet? Who knows! Perhaps it's a mystery best left unsolved. However what we can confirm was that the Fiendish Feet range were made by leading purveyor of dairy and dessert products St. Ivel.

As we have mentioned in other explorations of assorted novelty themed snacks, in the '90s there was a distinct shift in the casual eating market. While in previous decades assorted sweets, snacks and munchies had been designed to appeal to kids, in the late '80s some one, probably a hideous yuppie, had the revelation that the pocket money market wasn't where the big bucks were. After all, kids had very little money - they were paupers and povs when you thought about it! They'd didn't even have a filofax, nevermind a ten grand performance bonus burning a hole in their pockets! And so increasingly the snack market set its sights on the grown-ups, and one resulting boom area was posh ice creams for grown ups, and supposedly healthier snacks in the shape of assorted low fat yogurts and mousses. 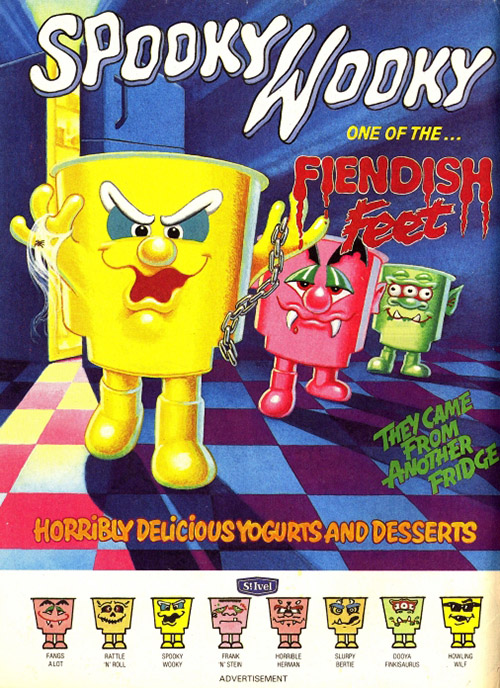 So then in this context, it is all the more bizarre that in November 1989 a quartet of weird beings appeared in stores. Sold in multi-packs of four, the Fiendish Feet had arrived. The original four flavours were Spooky Wooky (banana flavour), Fangs a Lot (strawberry flavour), Frank 'n' Stein (raspberry flavour), and Rattle 'n' Roll (chocolate flavour). Weighing in at 125g per pot, they were a decent sized yogurt, no health food thimble servings here, and despite being low-fat, they sported some classic tasty flavours.

Despite their somewhat bizarre concept and appearance, Fiendish Feet quickly became a huge hit. And more bizarre two legged horrors were soon scuttling into fridges across the land. Firstly poor old Fangs Alot would often be given some time off, and have some seasonal substitutes taking his place in the multipacks - a snowman themed beastie called Ivor Cold Toe (strawberry) at Christmas, and the self explanatory Hot Cross Bunny (also strawberry) taking over his spot at Easter.

A second range soon followed too. Called "Dairy Desserts" this was a second multipack featuring new characters - Howling Wilf (banana), Horrible Herman (strawberry), and Pharaoh Nuff (chocolate flavour). Meanwhile Dooya Finkisaurus brought us a new flavour - toffee apple. Oddly Pharoah Nuff was later replaced by a character called Slurpy Burpy, and no one is sure why. Possibly because they'd misspelled "pharaoh" and feared the ire of the nation's teachers. That's not a fact, but I'm going with it...

In July 1990, a third wave of Fiendish Feet saw St. Ivel changing tack slightly, for this new additional quartet were sold separately, rather than in multipacks of four. This range was dubbed "Monster Mousse" - perhaps the clearest clue we'll ever get that the origin of the Feet was indeed a dairy copy of Monster Munch crisps. Anyhow, this range brought us Tongue Twister on old favourite strawberry flavour, and a return of Pharaoh Nuff, back on toffee duties. But the remaining two of the Monster Mousse quartet were offering brand new flavours - Snortilla the Grunt gave us black currant and Melting Marvin delivered orange. 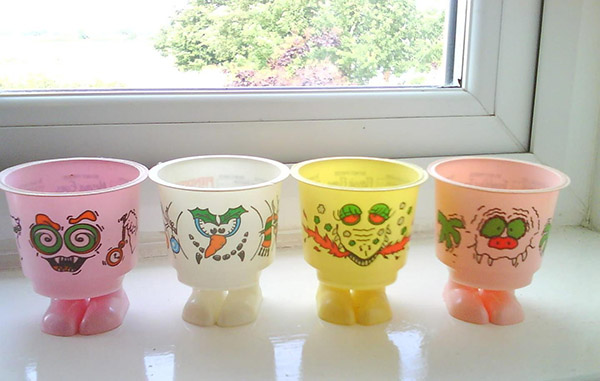 The following year St. Ivel shook the range up again - this time literally! This new foursome of Fiendish Feet were the Tremblers, which were descripted as "yogurt jelly with sauce". Basically the yogurt came with a fruity syrup sat on the top and the idea was that you gave the pots a good shake to mix the two together before opening. Why they weren't called something more fitting like "Spooky Shakers" I'll never know, but then again I don't like cocaine enough, or indeed at all, to work in a 1990s marketing agency. Anyhow, the Tremblers were - Trembling Trev (strawberry), Flossie Flame (banana and toffee), Moaning Mummy (orange), and Mesma Eyes (redcurrant and raspberry).

There was no doubt about it, the Feets were a smash hit and kicking all competition to the kerb. And like many novelty snacks of yesteryear, there were various offers to get assorted Fiendish Feet tat in the usual collect tokens from the packets deals. There were mugs, fridge magnets, bumbags, and storybooks. And at one point, probably drunk on the success of the Feets, some bright spark tried to expand the range into savoury spreads with the creation of Cheesey Wheesey. Sadly the cheese-based variety didn't catch on, leaving poor old Cheesy Wheesey as the only one of his kind.

There was seemingly no stopping the march of the pint-sized fiends. However it was not to last! In the shadows, an enemy lurked, a fearsome foe that would bring down the empire of the Feets... 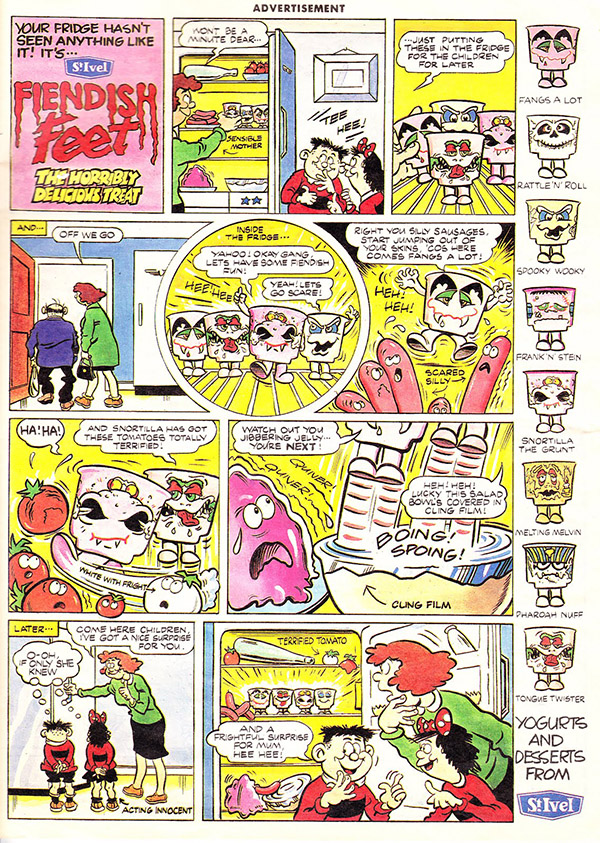 NEXT TIME - Discover who killed the Fiendish Feet!