OUT OF THIS WORLD

Sci-Fi Sounds from the BBC 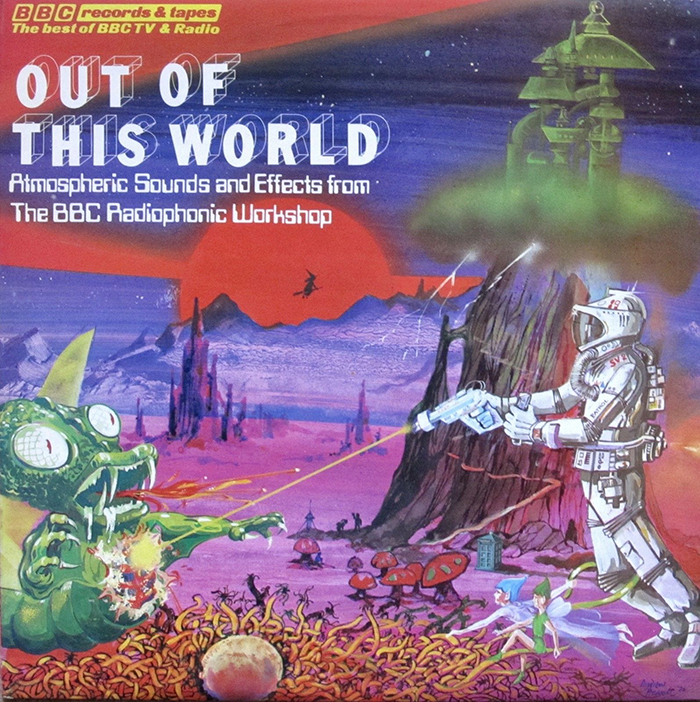 This article on Out of this World is also available in audio form as a podcast!

Hello again dear friends, and welcome once again to the 'Orrible 'Ouse of Terrible Old Tat! And while leafing through the assorted cobwebbed boxes I discovered a crate of vinyl that opened doors to whole other worlds! Were these ancient LPs covered with some lysergic residue, resulting in an impromptu and involuntary tour of the cosmos? Well not quite, but an intergalactic cruise in my own office did ensue... Let me explain...

As I've remarked before, and undoubtedly will remark again frequently in these articles, the pre-internet world now looks like a very strange place. For it was a place where if you missed a movie or a TV show, it was pretty gone forever. Now it is true that the dawning of the age of home video and cable TV had brought us endless repeats and boxed sets of video cassettes, but these were just primitive, crude ancestors of the on-demand playground we now have, the all-you-can-eat digital sweetshop that never closes. However for many decades, before VCRs and cable/satellite telly, there was another medium in which films and TV shows lived on, a strange netherworld where old favourites could be re-lived. Well, in part anyway. Welcome to the strange world of the tie-in record!

Now to begin with there were releases of favourite theme tunes and soundtracks, and then later assorted ill-judged stabs at the pop charts and tie-in novelty records. Sometimes you could even get a purely audio version of a movie or TV show, although admittedly often edited down and with inserted narration to make sense on non dialogue bits. And as the record industry enjoyed its golden age in the 1960s and 1970s, it's not surprising that many broadcasters decided to cut out the middle man and began setting up their own record labels.

Hence in 1967 the BBC began releasing all manner of assorted tie-in records as BBC Radio Enterprises. As the name suggests, in the early days it was drawing heavily on its extensive radio back catalog, with one of the earliest releases being a Goon Show LP. The venture was a great success, and by 1970 it had become the hipper and catchier sounding BBC Records. And the label would morph once again in 1974, moving with the times as it were, to become BBC Records & Tapes when the new-fangled audio cassette took off. And for more on the BBC's own record label I would heartily recommend Top of the Box by Tim Worthington, an excellent tome that is as entertaining as it is informative, that catalogues the varied and often strange singles it released over the years.

However aside from repackaging old shows in vinyl and cassette, and releasing themes and music, something very odd happened. Someone, somewhere, noted that the Beeb kept on getting requests from drama groups and amateur film-makers for sound effects. And as well they might, for the BBC was famous for having its own dedicated sound division, the legendary BBC Radiophonic Workshop, which had been founded in 1958 to conjuring up music, jingles and sound effects galore. It included in its staff a great many folk who would go on to be recognised as sonic pioneers - Delia Derbyshire, Brian Hodgson, Dudley Simpson, and Dick Mills, whose work would be become hugely influential in the field of experimental and electronic music. Now quite often the boffins at the Workshop would very obligingly dash off a tape of the requested sound effects and mail it out, becasue they were jolly nice folks too. But then some bright spark in the dark depths of Broadcasting House had the idea that perhaps the BBC should release a whole LP of sound effects, cutting out a lot of faffing around, and possibly making a few quid in the process! 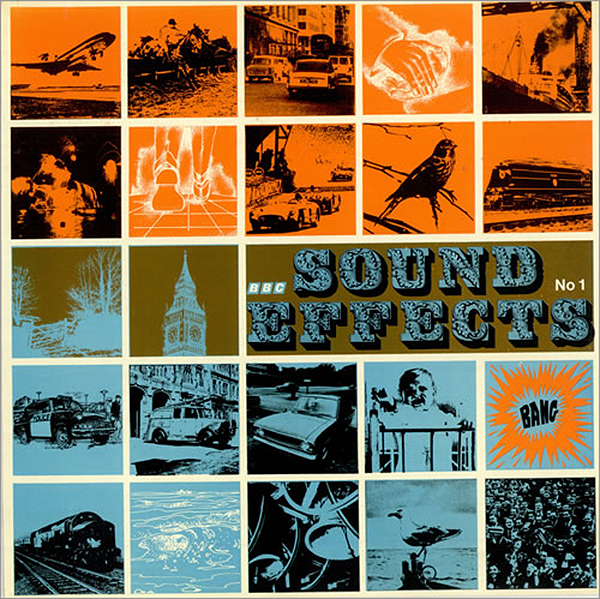 Hence in 1969, the LP BBC Sound Effects No 1 was unleashed upon an unsuspecting world. Now a vinyl LP composed of just audio effects might not have seemed the most commercial venture, but evidently the platter sold well, despite having a somewhat specialised market, and soon further volumes were hitting the records stores. The early volumes were simply assortments of useful sound effects, but as the series progressed they began to specialise, with Volume 10 being titled Music and Sounds for Home Movies. Judging from the track-listing, the home movies in question weren't the sort you mucky sods are looking up online these days. With tracks entitled "The Aegean", "Spain" and "Effects (French cafe)" I'm guessing this LP was intended for use with cine films of people's holidays. Although I grant you that "Effects (Dutch Carnival With Chair Dance)" does sound like an euphemism, and "Cup Bells, Vase Drum" could be a misprint... But moving on!

And the themed approach continued with the next release, for Volume 11 was entitled Off Beat Sounds - and from the collection of splashes, creaks, squeaks, and doooinnnnnnng! noises, I'm guessing this was designed for amateur comic capers. Although if you were to argue that most home-filmed smut would benefit from a swannee whistle or two, I wouldn't disagree. But the discussion of the acoustic choices in what they used to call "stag reels" aside, it was with the release of the next volume that things got really exciting!

For Volume 12 was called.... deep breath... BBC Sound Effects Vol. 12 Out of This World, Atmospheric Sounds and Effects from the BBC Radiophonic Workshop. Yes, hitting the record stores in 1976, and if I remember rightly often plugged by the voiceover bloke after the final credits for Doctor Who or Blakes 7 had rolled, now you could enjoy a trip to a "Sea of Mercury" or a "Venusian Space Lab" from comfort of your own Parker Knoll. However it wasn't all just "Laser Gun, Five Bursts" and "Flying Saucer Take-off", for this double LP was was composed of four themed sections, each taking up a separate side of vinyl. We began our audio odyssey with "Outer Space", and then flipped the platter for "Magic and Fantasy". While on the second disc we had "Suspense and the Supernatural" and "The Elements". The full tracklist can be found below - 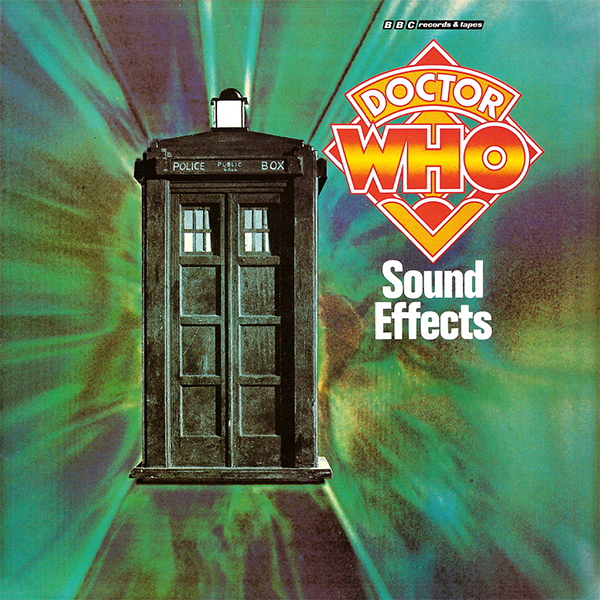 Now the BBC Sound Effects series would return to the interstellar audio realms once again later on, with 1978's Vol. 19 being Dr Who Sound Effects. This LP featured a glorious collection of audio flashbacks to some classic Doctor Who serials, featuring effects and sounds from the likes of Death To the Daleks, The Pyramids of Mars, The Brain of Morbius, Genesis of the Daleks and Terror of the Zygons to name but a few. All the sounds here were created by either Dick Mills or Brian Hodgson, and here's the full track listing -

The above listing is taken from the original vinyl release. However as shapr eyed Whovians will have noticed several of the serial titles are wrong. As it turns out, this was due to whoever compliled the LP using the original production titles of the serials, rather than the often snappier names they were broadcast as. Hence for the sake of clarity and gneral nit-picking, here is a little table showing the wrong titles and the corrected versions! 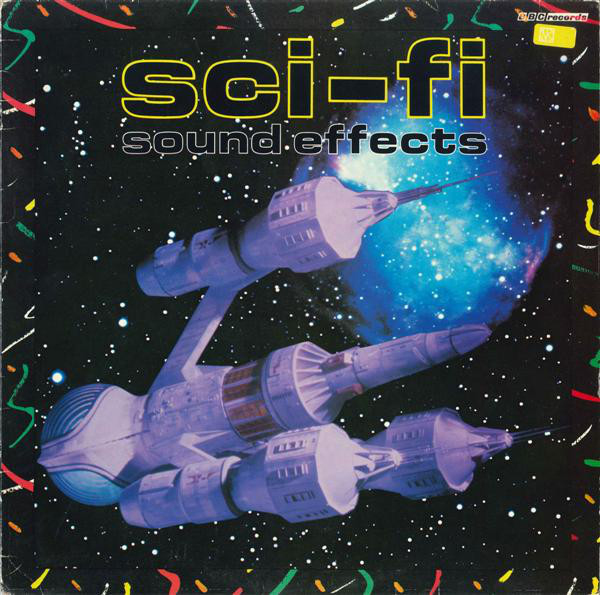 The series would be back among the stars in 1981 with Vol. 26 Sci-Fi Sound Effects. On this slab of intergalactic vinyl we had another sampling of sounds from Doctor Who, again from Dick Mills, but this time featuring sonic marvels from the recent series 18, which had aired between September 1980 and March 1981. However also included was another batch of audio delights also from Dick Mills, this time featuring all the interstellar sounds from The Hitchhiker's Guide to the Galaxy radio series, which aired in 1978 and was in fact the very first incarnation of the sci-fi comedy classic from Douglas Adams. There were more radio SF sonics conjured by Lloyd Silverthorn in anothe section, this one devoted to another BBC radio serial, Earthsearch. This had been a ten part series, written by James Follet, that was broadcast on Radio 4 in 1981.

However the real meat of this LP was a legion of sounds and effects from Blake's 7, the hit SF series created by Terry Nation. Elizabeth Parker deliverd a wedge of sounds from the fourth and final series that had just aired, while another massive section of the disc saw Parker pairedwith Richard Yeoman-Clarke to give us an extensive range of sonics and effects from the first three series of the well-loved show. The full track listing is below -

However undoubtedly this first excursion into fantastical radiophonic ambience is still the classic. Now obviously this is mainly because it was the first, the true pioneer. However secondly it should be noted that it featured a frankly astonishing line-up of electronic innovators - and while the likes of Hodgson, Simpson, Derbyshire, Limb and all the rest might not be household names, I guarantee that legions of musical artists you will know and love have been influenced by their work. Thirdy, this album was actually massively muscially groundbreaking. While it may have been conceived as a compilation of sound effects, it's clear that the folks at the Radiophonic Workshop weren't going to be content with just delivering a grab-bag of space-age noises. Instead they structured their cosmic sounds into a proper album format, arranging them by theme in distinct sections, so you could listen to the record as a kind of experiemental LP. And given the number of times this record has been sampled by artists down the years, it's fair to assum that may sonic explorers and avante garde listeners did just that

In this regard, BBC Sound Effects Vol. 12 Out of This World, Atmospheric Sounds and Effects from the BBC Radiophonic Workshop is a truly classic record in its own right. This was an LP that was snapped up by kids obsessed with spaceships, robots and monsters, kids who later would be messing about with samplers and sequencers and inventing musical genres like acid house, techno, trance and ambient. Given its landmark status and influence, it's only right and proper that the album was re-released on CD in 1991 as Essential Science Fiction Sound Effects Vol. 2. However it was re-released under it's proper name and on vinyl too in 2012 by AudioGo and Discovery Records, bringing a new generation to the still fresh and exciting sounds of outer space as conjured up by the Radiophonic Workshop.

However these wasn't the only legendary sound effect LPs produced by the BBC, for the next volume in the series would prove to be highly memorable to genre fans of a certain age, although perhaps for very different reasons... Sounds of Death and Horror!