THE MYSTERY OF THE SEA-MONKEYS

At Last the True Story of the Wonder Pets Advertised in Comics! 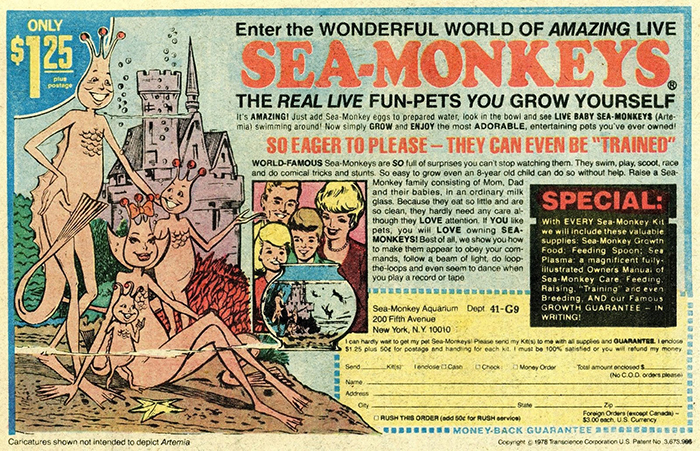 Welcome dear friends once more to the deary den of dubious delights that is the 'Orrible 'Ouse of Terrible Old Tat! Now then, in the several other explorations of the eerie ephemera and arcane items, the subject of mail order items has reared its suspect head a couple of times, and hence this week we are going to take a look at one of the most famous pieces of old tat ever sold through magazine small adverts - yes, the highly mendacious miracles that are the Sea Monkeys!

Now I'm guessing that most of you first came across this bizarre form of aquatic pet through the pages of a comic, and indeed specifically in the pages of an American comic book. For while some younger readers may well have picked up some Sea Monkeys in a toy or pet store in more recent years, for a long time mail order ads were the only place you could get hold of Sea Monkeys - something that perhaps contributed to their sales as we'll shortly discover. What's more, they advertised in more or less every comic book going, with their creator regularly taking out more than 3 million pages of ads in a year back in the 1960s and 1970s!

I am sure I'm not alone in being both totally mystified and intensely curious about what these alleged wonder pets actually were. Surely there wasn't a race of diminutive merfolk with strange crowned heads and pot bellies you could keep in a fish tank? Wouldn't I have heard about these so-called Sea Monkeys before? Surely David Attenborough and Johnny Morris would have told me about them on the telly if they were as amazing as the ads made out. But as I was in the UK, I knew sending off for them was probably a no go, and so it would be literally years after first seeing that ad - in the pages of a House of Mystery if I recall correctly - before I discovered the truth.

The saga of the Sea Monkeys begins back in the late 1950s, when a chap named Harold von Braunhut spotted a species of brine shrimp named Artemia Salina being sold in a pet store. Now these little creatures inhabit salt water lakes, and the interesting thing that von Braunhut discovered about them was the fact that these little fellows had a curious defence against their habitats drying up. This was a process known as cryptobiosis - essentially the micro shrimps would form a protective casing around themselves and go into a suspended state until water returned.

This remarkable survival trick fascinated von Braunhut, and he realised that possibly with some tinkering, the brine shrimp's method of cryptobiosis could make it the first just-add-water pet. Hence with the help of microcrustacean expert Dr Anthony D'Agostino, a formula was devised to add the necessary saline and other environmental elements to make ordinary tap water a habitat for brine shrimp. Soon they had cracked it, and von Braunhut's new pet was ready to go. He named his new creation "Instant Life" and it cost just half a dollar. But back then your 49 cents you just got a couple of packets of formula and eggs - you had to supply your own tank, although as the ads pointed out, you could hatch these creatures in an ordinary jar! 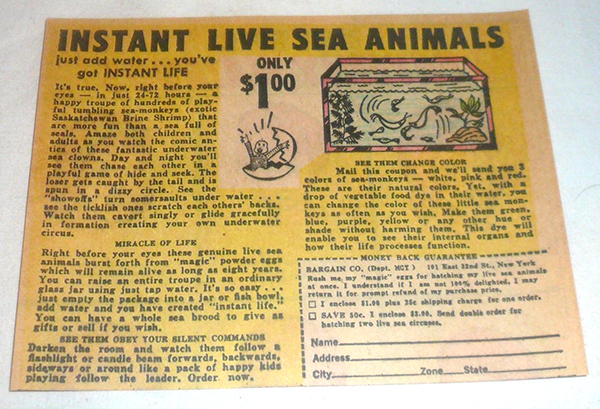 And so in the early '60s, he began to look at getting his product into toy stores. However a similar product from the famous toy company Wham-O - the folks who brought you the hula hoop, the frisbee and silly string to name but a few - had just been created, the Instant Fish. This projected toy was thought to be the next Big Thing and had caused massive excitement within the industry. Certainly it sounded amazing! A tank that came with a block of mud that contained eggs of the African killifish - just add water and hey presto, an aquarian full of rainbow coloured exotic fish. However the Instant Fish had bombed badly when it was realised they couldn't produce enough eggs on a regular basis to support a toy line. And therefore when von Braunhut was shopping around his own just-add-water pet kit, none of the big players were the slightest bit interesting, fearing another Instant Fish fiasco.

So then, von Braunhut looked to sell directly to the customer and had the smart idea to advertise in comics. The beauty of advertising in comic-books was that firstly it was very cheap, and secondly you could reach your target market of children directly. And as you could send coins, no cheques, credit cards or postal orders were needed, and so no parents who might veto replying to odd small ads in comic books needed to be involved! Soon he was taking out bigger and better ads, and came up with a new brand name too- Sea Monkeys! Incidentally the name "Sea Monkeys" came from the fact that the tails of the brine shrimp reminded von Braunhut of monkey's tails, while the sea part was simply down to the fact they lived in salt water... although technically, brine shrimp live in salt lakes rather than oceans. However that was the least perplexing thing about the newly minted Sea Monkeys. For the bigger and better ads, Von Braunhut enlisted the talents of a true comic book legend, Joe Orlando, who duly came up with the now iconic art featuring a family of very bizarre looking beings (as seen at the top of this page).

However despite many kids being disappointed that they didn't own a colony of miniature merfolk, and that often the brine shrimp tended not to live very long, the Sea Monkeys business prospered. And in fairness, Von Braunhut did offer a 2 year guarantee for replacement eggs if yours died, and over the years he developed a new hardier breed of shrimp that lived longer. And certainly plenty of kids got over that initially disappointing discovery that they'd bought a tank of little shrimps, for lucrative sidelines soon sprang up - food packets, new batches of formula, and a host of accessories (usually tanks in novelty shapes). Eventually, the Sea Monkey brand was so successful that the kits began to appear in toy stores at last! And now over fifty years later, they are still selling well to this very day. Of course those old somewhat fanciful, if not downright mendacious ads are now long gone, but Joe Orlando's mer-family are still going strong, now serving as brand mascots. 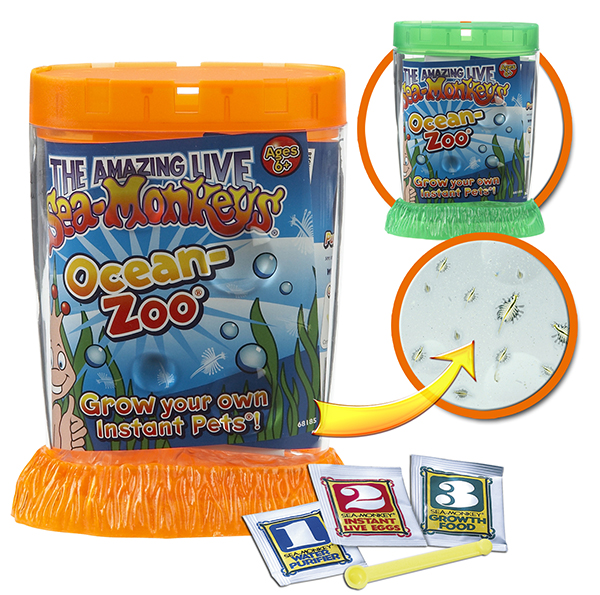