Top Trumps in the TARDIS? 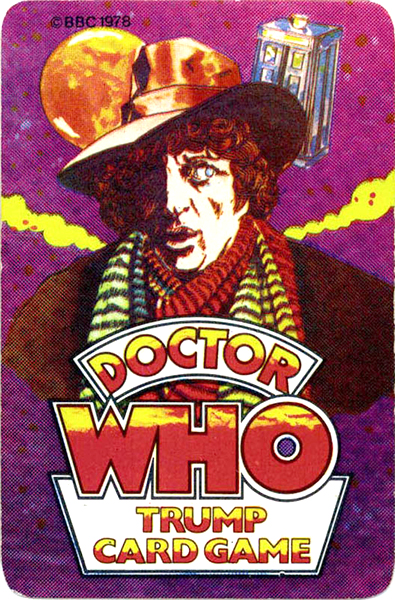 Welcome back dear fiends to the 'Orrible 'Ouse of Terrible Old Tat! Now the other day, we were rummaging in the games cupboard and unearthed a fondly remembered deck of cards that was essentially a set of Marvel Superhero Top Trumps. They were made by the toy company Jotastar, who held a great many licenses to produce spin-off and tie-in tat for a variety of kid-friendly franchises and properties. However this Marvel card game was not their only foray in the twilight world of exactly-like-Top-Trumps-except-in-name-only card games. For in 1978 they produced another suspiciously Trumps-like card game but tied to another legendary fictional universe - Doctor Who.

Back in 1978, Doctor Who was enjoying one of its many golden ages, for this was the era of the Fourth Doctor. And not only was Tom Baker's incarnation of the Time Lord that delighting the kids with his own brand of anarchy, humour and jelly babies, he was teamed up with the companion, Leela, she of the handy dagger and tribal garb, who was particularly popular with Dad and teenage boys for some reason... Anyhow, also at that time the series was just coming to the end of a run of particularly scarifying stories, which had greatly expanded the canon of iconic monsters and villains, and terrified a generation of children.

Now the card game produced by Jotastar was assembled by using pretty much the same template as their Marvel game, with the same rules being used with only minor tweaks here and there. Aside from the rules text being rewritten to include references to the long running SF show, there was a slight change to the stats on the cards - for while we still had the attributes Special Powers and Weapons, just like the Marvel deck, instead of Physical Strength we now had Mental Ability - a fitting change as the Doctor tends to out-think his enemies rather than throw buses at them. 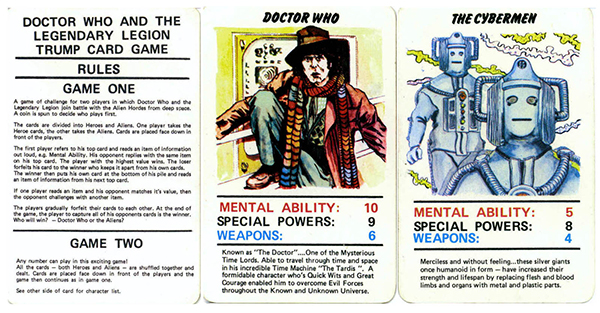 Also just like the Marvel game, you could divide the pack into to halves and play the good guys vs the baddies. However it is here that this game gets a little weird. For over the years the Doctor has had a long line of companions and assistants, plus he has met a host of good characters who have helped him out, such as the Brigadier, assorted Time Lords, Thals, and so forth. However somewhat weirdly, in the Heroes list, the only familiar faces we have are the Doctor himself (obviously) and the TARDIS. And instead of other characters from the show's history, we have the following -

Yes for some reason it was decided that famous historical characters should be the good guys. The rules refer to this disparate group as "the Legendary Legion". Now of course it is only right and proper to question why we have mythological characters (such as Thor) and fictional folks (Sherlock Holmes) rubbing shoulders with actual historical personages. But to kids back in the 1970s the more important question was "Why the hell are this lot in here? They were never in the show!". Well alright, Wyatt Earp had appeared in an First Doctor Story The Gunslingers, back when the show still did purely historical stories without any alien monsters in. But even so, that was back in 1966, well before most of the target audience would have been able to remember, or even have been born. So then, here was a Doctor Who game in which nearly the half the cards had bugger all to do with Doctor Who. 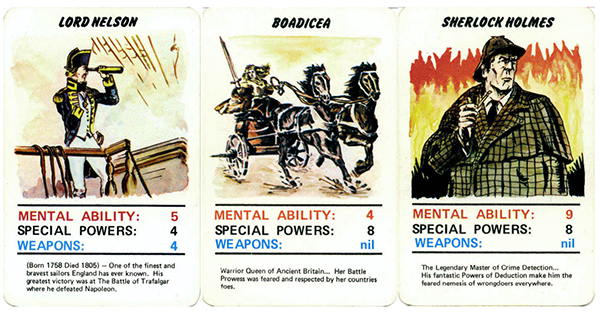 On the whole, looking at the selection of characters in the deck, I rather suspect the deck was devised by someone who had never seen the show properly - which would explain the good guys being pulled from history books. And as for the Aliens selection, it looks like they just went through the seminal Target tie-in tome The Doctor Who Monster Book which was first published back in November 1975. And hence, there are no monsters more recent that Tom Baker's first season, and even then with only Davros and the Zygons appearing. But while it was suspicious there were no newer monsters and villains, in all fairness, it is a rather good list of famous foes!

However there is an obvious anomaly - for although we do have their creator, Davros, their hired muscle, the Ogrons, and two races they fought bloody and bitter wars with, the Mechanoids and the Draconians, the Doctor's most famous enemies, the Daleks do not appear. Now possibly this was down to the fact that Terry Nation, who originally created the intergalactic terrors, still owned the copyright to the Daleks, and indeed around this time he was considering various plans featuring the pepperpots from Skaro such as having them appear in Blake's 7 and developing a separate Dalek series.

However judging from some of the attributes given on the cards, it is equally plausible that the Daleks being missing was just a blunder. For it seems clear that not only had whoever devised the set never seen Doctor Who, they were also wildly oblivious to history too, and even what was on the cards as well. For example, Boadicea has a Weapons score of 0 despite being shown waving a dirty great sword and riding in her famous chariot with spiky wheels! 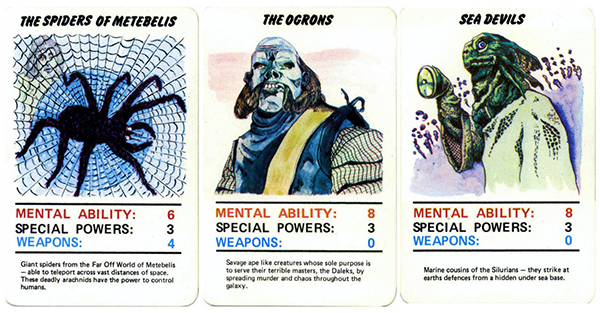 It is also a shame that the artwork on the cards isn't quite as good as the Marvel pack. Some cards do like rather nice, and it's fun to see familiar faces from Whoniverse rendered in a pseudo comic-book style. On the downside though, many are clearly copied from very familiar photos (hello again Target's Doctor Who Monster Book), and some look distinctly wobbly. And as many of photos in that beloved tome were in black and white, you can see where the artist has just been guessing what was in the dark, smudgy areas. The Ogron is a great example of this, with clear guesswork filling in many areas of shadowed detail, and the whole picture looking like a ripply funfair mirror reflection. See also the background face on the Spiders from Metebelis card, whose features have been clearly surmised from a blurry photo.

On the whole then, while it seemed like a brilliant concept, sadly this Doctor Who Trump Card Game didn't quite deliver on its promise. Nor did it live up to its Marvel cousin - while that card game had felt authentic and official, to the extent it was like a little loose leaf encyclopedia or guidebook for the Marvel Universe, the flawed execution of the Doctor Who game clearly marked it out as cash-in tat. Much like the Doctor Who Annuals of the same era (more on which another day), or the previously discussed TARDIS Tuner, while we were happy to have them - there wasn't a lot of merch about back then remember - at the same time you knew they weren't exactly right. They weren't proper Doctor Who like the Target Books or the Palitoy Talking Dalek. In fact, in many ways, they were a pale shadow of Doctor Who cards given away free with Weetabix around the time which featured not only better art but an innate understanding of the series (and again, more on those another day)

However despite all that, the set now goes for a hefty price, with many sellers flogging off individual cards for a couple of quid a go. And while my inner collecting geek naturally baulks at breaking up sets and selling off cards one by one in this manner, at the same time I can understand why you might really want, for example, the Sea Devil or Mechanoid cards, but be more than happy to pass on the wobbly Ogron... 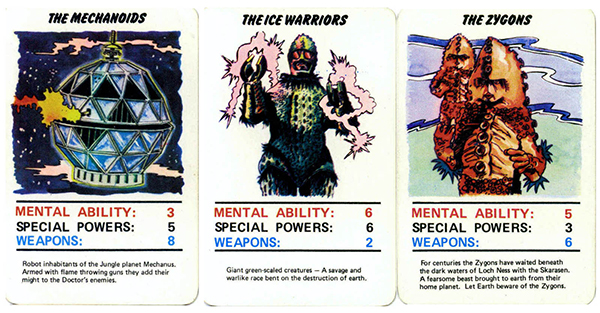