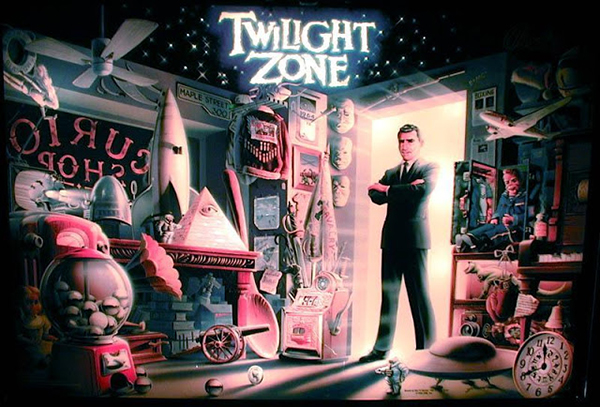 You're traveling through another dimension, a dimension not only of sight and sound but of tat. A journey into a dubious land whose boundaries are that of the imagination of tired marketing executives. That's the signpost up ahead - your next stop, the 'Orrible 'Ouse of Terrible of Tat!

Yes, welcome once again dear friends to this marvellous repository of the weird, the wonderful and the wonky! Now then, on our initial tours of the collections of questionable ephemera here, we've had a gander at some items that were rather fondly remembered. However, now it's time to take the gloves off, and delve into some of the darker recesses of the 'Orrible 'Ouse, and sample something that is not so well loved. Or even well remembered... And quite possibly deservedly so!

Now I must confess I never owned the item in question, but in my defence, from my researches into the matter, I'm not entirely sure anyone ever owned one of these! For it is not very often that one discovers some piece of tie-in tat that isn't listed multiple times on the likes of Ebay. But I am getting ahead of myself... Follow me, let's take a quick trip back to the Dark Ages. Well, the 1980s at least...

Once upon a time, not so long ago, there was a world that didn't have the internet. Yes, I know, hard to believe, but it did happen. Anyhow, if you were a devotee of the weird and wonderful, the pre-web could be a somewhat sucky place. For in all probability the town where you lived didn't have a games shop, or a comic book store, and even if you wanted something relatively mundane, like the latest copy of House of Hammer, or Starlog, or Fangoria or Starburst, you had to traipse around many newsagents to find one. Now given this state of affairs, marvellous mags like the seminal journals I just mentioned were always full of ads from assorted mail order companies; places that would happily sell you tomes, comics, soundtrack LPs, models and all kinds of tie-in tat. Indeed, in future excursions in the 'Orrible 'Ouse we will no doubt be looking at some of these fabled items of tantalising mail order swag.

But the trouble was, back then mail order was a long slow process, and for most kids somewhat impractical. For it meant that parents had to be cajoled into parting with credit card numbers or cheques. And naturally most parents took a dim view of their offspring wanting the score to Cannibal Holocaust, a chestburster T shirt, or a life-size poster of Frankenstein's Monster. Plus quite often the mag you were perusing came from the other side of the Atlantic which meant coughing up more for the shipping than the original item. However despite much of the readership being kids without access to credit, or simply being in an entirely different country to the vendor, evidently these mail order outfits did well enough from this fan market over the years for some very strange things to be offered.

And the one of oddest of all, I spotted in the pages of dear old Fango, way back in 1986. It was an ad that ran several times, and I have always wondered whether anyone bought one. Now this was a little item called The Zone Box, a bit of tie-in tat for the classic TV series The Twilight Zone. Now at that time, the show had just been revived the year before, in 1985, and of course Rod Sterling's original series was still running late at night on many TV stations round the world. However despite its status as a recognised bona fide titan of television, I am still to this day at a loss to explain quite why anyone would need this particular treasure. Here's the ad - 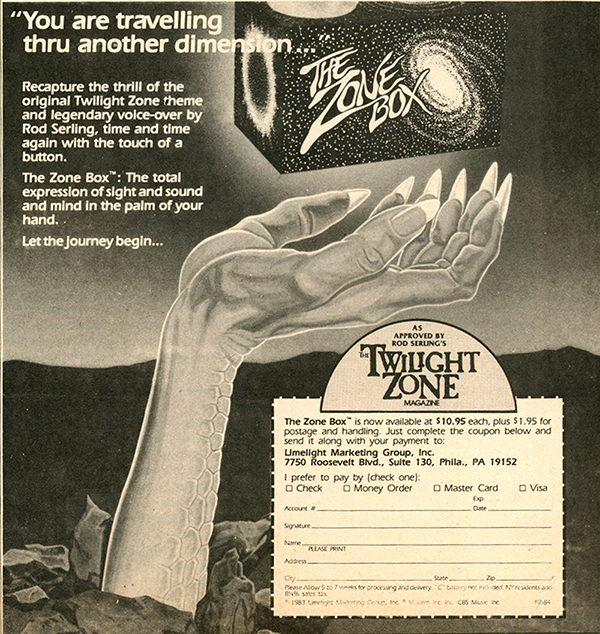 Yes, the Zone Box! Just a box that plays the intro to The Twilight Zone... Why? I ask! Why in the name of Shatner's Gremlin would you need this? I don't even think it has The Twilight Zone written on it anywhere (despite being officially licensed allegedly)! I mean, seriously, who need this thing?!? It's as much use of Burgess Meredith's specs at the end of the classic TZ episode Time Enough At Last!!!

Alright, enough exclamations marks now... Perhaps more seriously for any maniac considering buying this outrageous bit of old tat, it doesn't even specify which version of the intro the Zone Box plays - for the original show actually had several different ones. But from the blurb, I'd guess it uses the best known narration and theme combo that opened episodes in Seasons 2 and 3. But obviously, having never seen a Zone Box in the flesh, I have no idea... But given that there does not seem to be any floating around for sale on the internet I suspect no one else has either!

However I did turn up a couple of pictures of this highly dubious item, which do reveal what no doubt many of you older readers have suspected - that it works with one of those old miniature plastic record players. For younger folks, in the days before microchips and assorted cyber-tat, if you had something that made a noise or "spoke", whether it be some doll or a Palitoy Talking Dalek, the sounds were produced by a small turntable which played a tiny plastic record. Yes, proper old skool! Usually they were battery powered, but some operated with a pull-cord to spin the Borrower-sized platter. Obviously they weren't very loud, and the cheap plastic discs never sounded anywhere near as good as a proper size vinyl LP. Plus, being cheap plastic they often got scratched to buggery very quickly. So then, I think it's safe to assert that Rod Sterling's famous narration probably sounded less than majestic coming from the depths of The Zone Box. 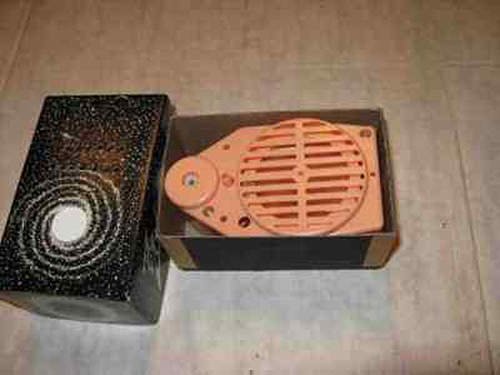 I vividly remembering wondering who in Hades would desire such a thing, and indeed who exactly so badly needed to read Rod's dulcet tones on such a regular basis. And looking at it now, I can only marvel at the misguiding thinking that led the makers to actually trademarking the name "The Zone Box" - for I honestly can't imagine a huge demand for this item even among the most dedicated Twilight Zone fans, nevermind a market for pirate knock-offs. And judging by this piece of terrible old tat being virtually unmentioned in the vast expanses of the modern internet, I can only assume that very few were ever sold. Ironically it is a tie-in item that seems to have vanished into The Twilight Zone itself!

Having said that though, it probably now sells for an absolute fortune. Possibly for the price of a small house. And hence in a twist worthy of the great Rod Serling himself, I'm now regretting not getting one back in '86... 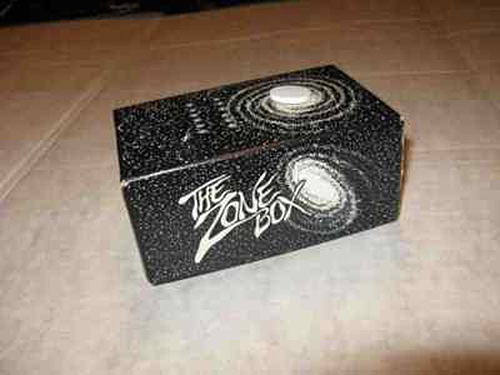