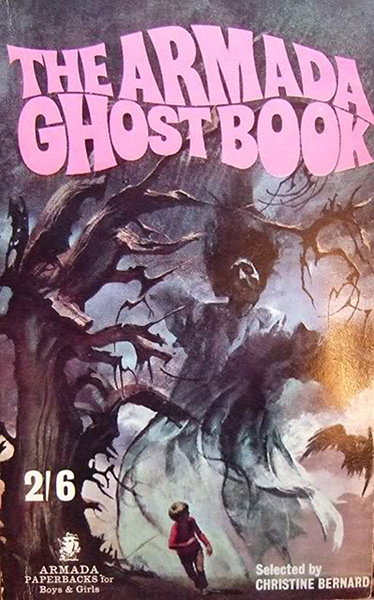 Weird fiction has always enjoyed a close relationship with the short story, and until relatively recently, lovers of the macabre would find the shelves of bookshops offering a wide range of anthologies to choose from. These days, the Horror section in your local bookstore (if it has one) is likely to contain mostly novels, an after-effect of authors such as Stephen King and James Herbert hitting the bestseller lists in the 1980s. However not that long ago original horror novels would have been outnumbered by a plethora of paperback antholgies. In the UK the great-grandfather of the horror anthology in modern times is probably The Ghost Book edited by Lady Cynthia Asquith, a volume first published in 1927. This collection of classic ghost stories went down so well, Asquith edited several more anthologies in the same vein such as When Churchyards Yawn (1931) and My Grimmest Nightmare (1935), and indeed would produce additonal volumes of The Ghost Book in the 1950s, establishing it as a paperback series.

As you would expect, other publishers soon noted the popularity of the Asquith volumes and a similar series imported from America, the Not At Night range of anthologies.Therefore in 1959, the marvellously named Herbert van Thal put together The Pan Book of Horror Stories which was to spawn a massively successful range which would run for decades, while a few years later in 1964, rivals Fontana would hire legendary author of strange stories Robert Aickman to helm The Fontana Book of Great Stories. By the 1970s, several more publishers were producing their own ranges of horror or ghost story collections, while editors such as Peter Haining, Michael Parry and Hugh Lamb were producing carefully curated themed anthologies. And with such a boom on weird fiction collections, it was only a matter of time before someone decided to do a range for children.

Now Robert Arthur had ghost-edited a couple of anthologies for kids as Alfred Hitchock (and that's a story for another day), however the real kids answer to the Pans and Fontana came from Armada Books. Armada had been acquired by Collins in 1996, who also owned Fontana. In 1966 Fontana launched a companion series to their Great Ghost Stories line, The Fontana Book of Great Horror Stories, which was edited by Christine Bernard, who would produce another three volumes in that range. Therefore when the idea of a junior equivalent was mooted, Christine Bernard once again took the reins. And so in 1967, a little anthology of spooky tales for younger readers, entitled The Armada Ghost Book first appeared on the shelves. Bernard put together an eclectic mix of tales, featuring classic ghost stories, some retellings of spooky folk-tales, plus a sprinking of new tales penned by modern authors.

The full contents were -

Sandy MacNeil and His Dog by Sorche Nic Leodhas
School for the Unspeakable by Manly Wade Wellman
The House of the Nightmare by Edward Lucas White
The Story of the Inexperienced Ghost (1902) by H. G. Wells
The Giant Bones by Sorche Nic Leodhas
Prince Godfrey Frees Mountain Dwellers and Little Shepherds from a Savage Werewolf and Witches by Halina Gorska
The Water Ghost of Harrowby Hallby John Kendrick Bangs
The Red Room by H. G. Wells
Spooks of the Valley by Louis C. Jones
The Lads Who Met the Highwayman by Sorche Nic Leodhas
A Pair of Hands by Sir Arthur Quiller-Couch

With a memorably eerie cover and moody black and white illustrations inside by Gino D'Achille completing the package, The Armada Ghost Book would prove to be a huge hit. Indeed it would be being reprinted many times, staying on the shelves for a couple of decades to thrill and terrify several generations of children. And while in 1978, the book did get a make-over - which consisted of a new cover and the title ammended to The First Armada Ghost Book - the contents inside remained unchanged. 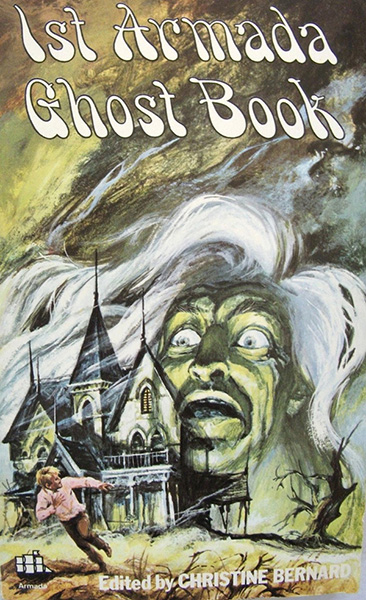 Looking back at the selection now, I would have to say that while there are some very fine tales in here, the inclusion of several stories from the same authors (Wells and Leodhas) does feel a tad lazy. However that said, this volume does provide a well-judged balance of stories, with some providing some ghostly fun and spectral action - nothing to cause too many nightmares basically - but there are some bona fide skin-freezers in there too. And so, any kids who were feeling maybe a little short-changed by the lighter, folksy yarns of Sorche Nic Leodhas or the whimsical offerings from Wells and Kendrick Bangs, would find genuine chills a plenty in School for the Unspeakable, The Red Room, and The House of the Nightmare. While it could be argued that perhaps this could have been a more daring selection, featuring a greater percentage of frightening fare, its balanced mixture of stories made it an approachable gateway to the world of ghost stories and weird fiction, with just enough truly terrifying tales to satisfy the kids but not so many as to bring a down a storm of parental complaints.

As The Armada Ghost Book had proved to be such a hit with readers, the following year editor Christine Bernard was called upon to assemble a second serving of spooky stories for younger readers. And hence in 1968, The Second Armada Ghost Book hit the shelves. 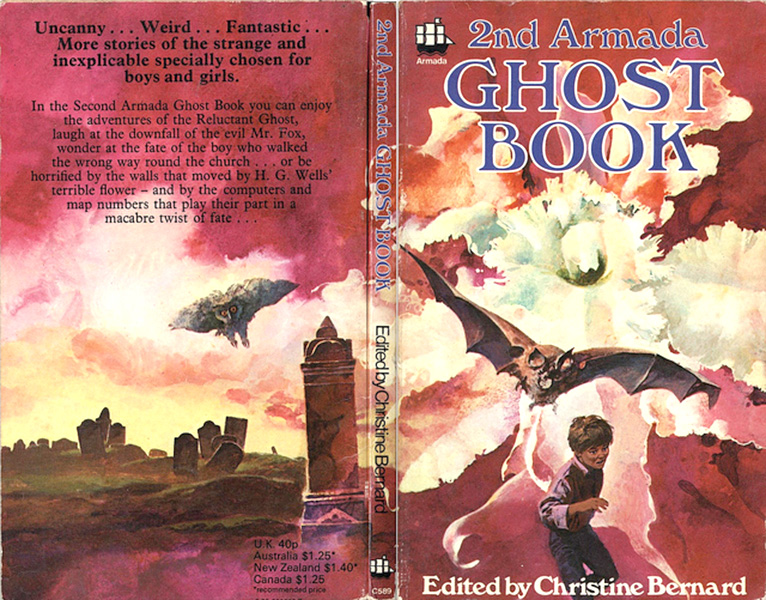 This second volume followed the template of the first quite faithfully, serving up a mixture of different sorts of ghostly tales. And once again Gino D'Achille was on art duties. However this time round we got a somewhat thinner book - not only in size but in content. Like the first we have two tales drawn from folklore from Sorche Nic Leodhas, another brace of tales from HG Wells, and in addition there another auhtor, William Croft Dickinson, is alotted two stories. The full contents are as follows -

The Ghost Who Didn't Want to be a Ghost by Sorche Nic Leodhas
The Keepers of the Wall by William Croft Dickinson
Fiddler, Play Fast, Play Faster by Ruth Sawyer
The Magic Shop by H G Wells
Mr Fox by Traditional
His Own Number by William Croft Dickinson
The Man Who Walked Widdershins Round the Kirk by Sorche Nic Leodhas
The Flowering of the Strange Orchid by H G Wells
The Uglie-Wuglies by Edith Nesbit

Given that we have another chunk of folklore in the shape of the traditional old fireside tale Mr Fox (a variant on the Bluebeard story), and that the last story in the collection from E Nesbit is actually just an excerpt from her novel The Enchanted Castle, this collection feels a good deal less diverse than its illustrious predecessor. But furthermore this book is somewhat light on actual ghost stories. The two tales from Wells are enough entertaining, but don't exactly feature any hauntings, likewise the extract from Nesbit. Mr Fox though horrible is free of spectres, and while the tales from Leodhas and Ruth Sawyer do feature the supernatural, the ghosts and sprites from folklore are more fairytale baddies than figures from nightmare. Thankfully William Croft Dickinson is on hand to deliver a fine eerie tale in the MR James tradition in the shape of The Keepers of the Wall and in a nice contrast, conjures some memorably modern unease with computers in His Own Number.

Now The 2nd Armada Ghost Book isn't a terrible anthology by any means, as all its tales are goo,. but it does lose marks for wandering away from proper ghost stories and having a limited pool of authors. So on one hand it's a fun collection of tales to have, but not one of the stronger outings in the Armada series. Tellingly the third volume of Armada Ghost Books would see a new editor taking the helm...