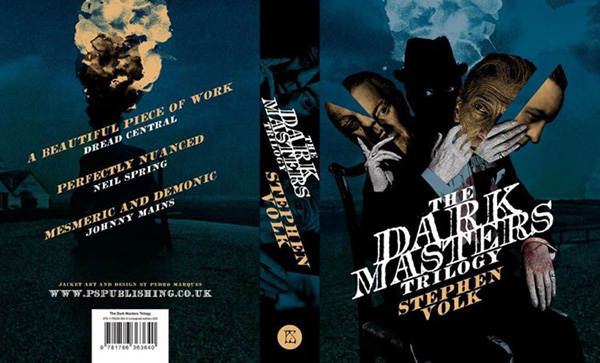 To fans of all things weird and wonderful, the name Stephen Volk will ring many notable bells. He first came to prominence with his script for the gloriously demented movie Gothic (1986), directed by the equally demented legendary director Ken Russell, which recreated the famous gathering of poets at Lake Geneva that gave birth to modern horror fiction - with Byron’s physician and companion John Polidori penning The Vampyre which spawned modern vampire literature, and Shelley’s wife Mary creating Frankenstein. Volk himself would go on to work with another horror legend William Friedkin, the man who brought The Exorcist to the screen, writing the 1990 chiller The Guardian, and brought terror to the small screen himself with the short lived but fondly remembered ITV series Afterlife, in which a pre-Walking Dead Andrew Lincoln investigated eerie cases involving a medium played by the brilliant Leslie Sharp. He would also script The Awakening (2011), a chilling big screen haunted house tale, and has published several collections of razor-sharp short fiction - Dark Corners (2006), Monsters of the Heart (2013) and The Parts We Play (2016). However if all of the above weren’t impressive enough, Volk is most famous, or should that be infamous, for creating the now legendary Halloween BBC TV special Ghostwatch in 1992, a ground-breaking drama that caused a massive uproar for basically scaring the bejesus out of millions of viewers (see my podcast on the show for more details). So then, all in all, with this impressive career, thrilling and chilling audiences in cinemas, on television and on the page, it is fair to say that Volk is truly one of the modern masters of weird fiction.

Now one of the things that has consistently made Volk’s works so compelling is his appreciation and knowledge of the history of the genre, and in recent years he has been exploring the lives and times of other icons in the field. In 2013, he published a short novella with the late lamented Spectral Press, entitled Whitstable, which took a look at the life of Peter Cushing in his later years. He followed this up in 2015 with another novella for Spectral Press, Leytonstone which delved into the childhood of Alfred Hitchcock. More recently a proposed TV project that never got off the ground inspired a a third novella along similar lines. However in this tale, entitled Netherwood, we have not one legend but two, with best-selling author Dennis Wheatley, the man who wrote a string of black magic thrillers such as The Devil Rides Out, having a curious encounter with a real-life occultist, the notorious Aleister Crowley. And now Netherwood is being published along with the two earlier novellas in one volume by the excellent PS Publishing, as The Dark Masters Trilogy.

The book opens with Whitstable, which as many Hammer horror fans will know was Peter Cushing’s hometown. The story catches up with the famous horror star in the latter days of his career. When the tale opens Cushing has just lost the light of his life, his beloved wife Helen, and he is so stricken with grief that his own life is beginning to unravel. However like all the stories in this volume, what follows is not merely an exercise in storifying a biography. Instead Volk imagines scenarios and situations which will allow him to explore not only the lives and times of his subjects but also their characters. 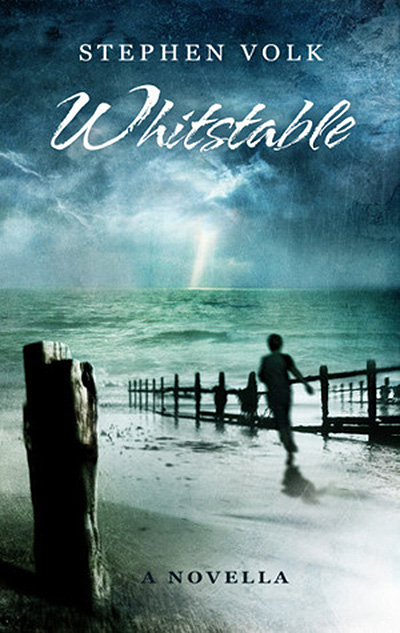 Hence in Whitstable, we find the deeply bereaved Cushing approached by a young boy who mistakenly believes that Cushing is in fact one of the famous characters he made his own, the dashing Professor Van Helsing from the Hammer Dracula movies. And indeed, while the boy may well be somewhat confused, he certainly does need a real hero in his own life at that time. And Cushing, being the true gentlemen he really was, obviously cannot help but do all in his power to help the lad.

And although it may be a slight spoiler, I should reveal that this is not merely a story in which the real life Peter Cushing goes toe-to-toe with an actual vampire, like his fictional homage, Peter Vincent in the movie Fright Night (1985). Instead we have a far more compelling tale that will see Cushing going up against a very real world evil, but will also lead him to battling his own personal demons. Whitstable is a wonderful portrait of Cushing himself, and is packed with moments of menace and magic. But it is also profoundly moving too, a tale that is as touching as it is terrifying. And while obviously the events in Whitstable never really happened, by the end of it you will feel as if you have really met and spent some time with the legendary actor himself.

By contrast, while our opening novella catches its iconic subject in the latter days of his career, the second part of the book sees us meeting one of the greatest movie directors of all time in his boyhood. Inspired by an earlier short story Little H (found in his collection Dark Corners), the next novella Leytonstone has us journeying to London in the early years of the 20th century, to visit Alfred Hitchcock in his childhood. The tale takes as its starting point a story that Hitch himself often told - that when very young his father took him to the local police station, where without any explanation, the little boy was locked up in the cells. This was, as Hitchcock was informed upon his release, to show him what happened to naughty boys. It was an incident that Hitch never forgot, although whether the so-called lesson had quite the desired effect is open to question. For in later life, Hitchcock delighted in manufacturing disturbing situations to spring upon folks around him, often of a somewhat cruel nature, just to see how they would react.

Volk’s story recounts this boyhood trip to the clink through the eyes of little Alf, but the meat of the story is very much exploring the effects and aftermath it has on the future director. Once again, the story is jam-packed with all manner of details about Hitch’s early years and there are a legion of easter eggs for Hitchcock fans to spot, little allusions and echoes of famous scenes and images from his movies. But the real magic of this tale is the way in which Volk captures what it is like to be a little child, to be very much at the mercy of adults and struggling to understand the world around you and the people in it. Leytonstone is a much darker tale than Whitstable, and rightly so, for I think it is fair to say that the adult Hitchcock could be, shall we say, a somewhat difficult man to be around. However as sinister are the story gets, you never lose sympathy for the young Hitch, which is a remarkable feat considering what will unfold. 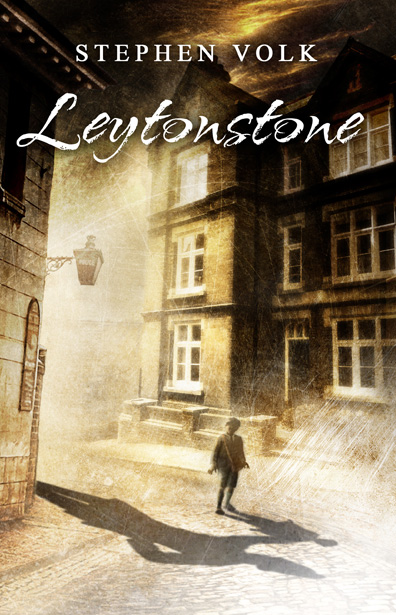 So then after the stories of a true gentleman, and a man who was somewhat personally macabre, the final novella Netherwood rather fittingly has a good chap tangling with a man the press dubbed “the wickedest man in the world”. Although now remembered best for writing a couple of books adapted by Hammer Films, most notably The Devil Rides Out, Dennis Wheatley had served his country in the war and dominated the bestseller lists for decades with his adventures and thrillers, the most famous of which were his black magic novels. Indeed, Wheatley even created a public image of himself as being an expert on all things occult back in the day.

Now Netherwood sees Wheatley receiving a summons from another iconic figure, indeed for many years the other name that would spring instantly to mind when someone mentioned black magic - Aleister Crowley. In earlier decades, this self-styled magician had outraged the world with his antics, very much creating the template for what we’d now call the classic rock and roll lifestyle. He travelled the world, took copious amounts of drugs, indulged in all manner of sexual excesses and sold millions of newspapers that eagerly recounted and indeed invented wild tales of his depavity. However by the 1940s, Crowley was largely forgotten, and suffering from the ravages of his excessive lifestyle, plagued by ill health, he lived out the last of his days in a somewhat eccentric boarding house in Hastings named Netherwood.

In this tale of occult wrangling between two key figures in the history of black magic, Volk has a lot of fun with these colourful characters. To begin with there is the irony that while Wheatley has dropped out of fashion and is now a somewhat forgotten former master of horror fiction, Crowley has never been more popular, with his life and magical writings commanding a huge audience across the world. However what is more fascinating is that as the strange story of Netherwood unfolds we discover that neither man is quite the character that their public reputations suggest. To begin with, the aged Crowley, a man who dubbed himself the Great Beast 666, is appealing to the young Wheatley for aid against an evil occult menace.

What follows is a fascinating meeting of minds. On one hand, there is as you would expect a clash of personalities, and indeed a conflict of philosophy and belief, between the conservative Wheatley and the libertine occultist. However there is also a touching mutual respect between the pair, despite their massive differences and constant trading of barbs and slights. Throughout The Dark Masters Trilogy, there is a running thread of essential ambiguity, and a recurring theme that explores the tension between having a famous public persona and the real private person inside. And these elements very much come to head in this fictional adventure between Wheatley and the Great Beast, making Netherwood a very fitting grand finale to the book.

It is very clear that Volk has really done his homework in researching his subjects in these tales. Each story is a treasure-trove of biographical details and allusions. However as top notch as the historical elements are, the real magic comes from the way Volk gets you to step into the minds of his characters. In this book, you will not only learn about the lives and times of this quartet of iconic figures, but you will get to know them as living, breathing people. And while the stories are gripping page-turners, it’s the sense of intimacy with these men that Volk conjures that will really hook your heart. The Dark Masters Trilogy is densely packed with all manner of biographical goodies that will repay many a revisit, but I think it’s the often profoundly touching journeys we take into the private lives of these characters that will have you coming back time and time again. And hence this is a book that deserves a permanent place on the bookshelves of any lover of the weird and the wonderful.

The release date is 19th October 2018. And this marvellous tome is being launched it at Fantasy Con in Chester. Of course, you can order the book online too, direct from PS Publishing - with the regular hardback priced at £20.00, and signed editions are available for £40.00. Grab it now, as I suspect this one is going to be a collector’s item!

The Dark Masters Trilogy can be ordered here 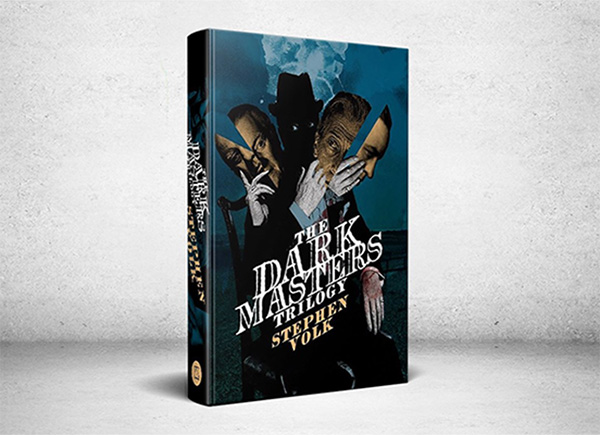