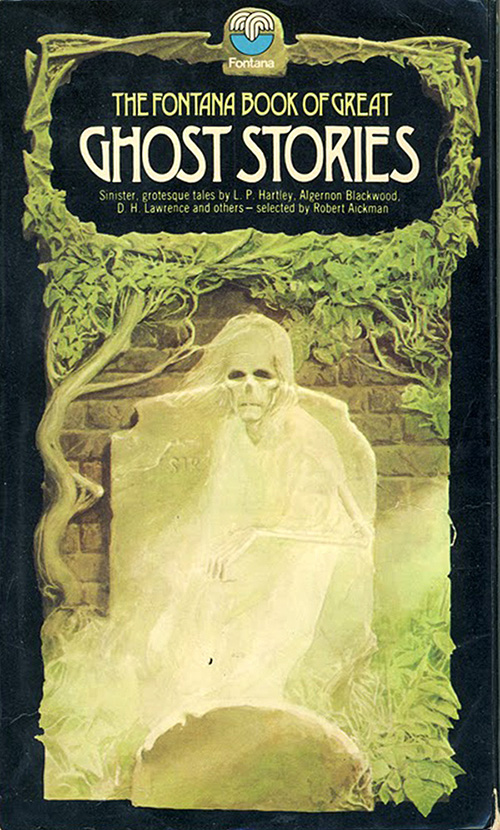 In the '60 and '70s, there was a huge market for short weird fiction. Indeed so much so that many publishers had long running paperback franchises that tapped into the public's appetite for short shockers of all kinds. And Fontana Books were no exception, for they had several different series, The Fontana Book of Great Horror Stories, the Tales of Terror series, Frighteners, and a host of one-off anthologies. But the jewel in their crown was the Great Ghost Stories series, which were published over two decades and would run into a whopping twenty volumes.

The first eight books in the series are particularly noted by lovers of weird fiction for these volumes were edited by a bona fide legend in the field, that modern master of the strange tale, Robert Aickman. Now I picked up this little paperback secondhand back when I was nine or ten, and of course I had no idea who Robert Aickman was. But how could I resist that wonderfully eerie cover, a painting so atmospheric that for several years it actually quite spooked me - it was one of those scary pictures that you would dare yourself to look at by torchlight in dark, and usually frighten yourself daft with.

However despite the creepy cover, I must admit that I didn't really take to this collection when I first got it. I had hoped that as this was a book for grown-ups, I'd get something that was far more terrifying than the assorted spooky anthologies aimed at young readers I already had (see earlier articles in this series for the main offenders). However despite the hair-raising promise of the chilling cover, I must confess I struggled with many of the stories in this volume, and I'm sure many of you might have a few questions over the contents, which are as follows -

The Travelling Grave by LP Hartley
The Ghost Ship by Richard Middleton
Squire Toby’s Will by J. Sheridan le Fanu
The Voice in the Night by William Hope Hodgson
Three Miles Up by Elizabeth Jane Howard
The Rocking-horse Winner by DH Laurence
The Wendigo by Algernon Blackwood
The Crown Derby Plate by Marjorie Bowen
The Trains by Robert Aickman
The Old Nurse’s Story by Mrs Gaskell
Seaton’s Aunt by Walter de la Mare

Now, while there are some classic titles in this selection, I'll bet that some of you are wondering if this is a book of great ghost stories, where is MR James or EF Benson? Furthermore several of these tales - such as the stories from Hartley, Hodgson, Blackwood and Lawrence - aren't actually ghost stories at all, but horror tales really. And then, in the offerings from Howard, de la Mare and Mr Aickman himself, we have undoubtedly spooky tales but you are not entirely sure whether they feature a ghost, or even what exactly has gone on.

For the good Lady was a pioneer of the modern ghost story anthology, assembling several classic collections that stayed in print for decades and penning some fine spectral tales herself too. Indeed when this first volume in the Fontana Great Ghost Stories series was published it would have been sat on shelves next to paperback editions of Lady Cynthia's anthologies. Hence Mr Aickman is not only respectfully doffing his hat to the doyenne of ghostly collections, but also seeking to no overlap her selections. Hence the exclusion of many titles that we would at first expect.

But also this collection does reflect the tastes of Mr Aickman himself; much like his own fiction, these stories are not cast from the conventional mold and instead pursue in their own different ways the unusual and the unsettling and the uncanny. And while I found several of these stories difficult to comprehend when I was a boy, in later years I was very glad I had kept hold of this little book. This was very much a book I grew into, and have grown to appreciate over the passing years. There may be few traditional ghost stories between its covers, but it is nevertheless a very strong selection of chillers, and one that rather masterfully demonstrates the range and scope of the weird tale.