BRED TO HUNT THE DEAD 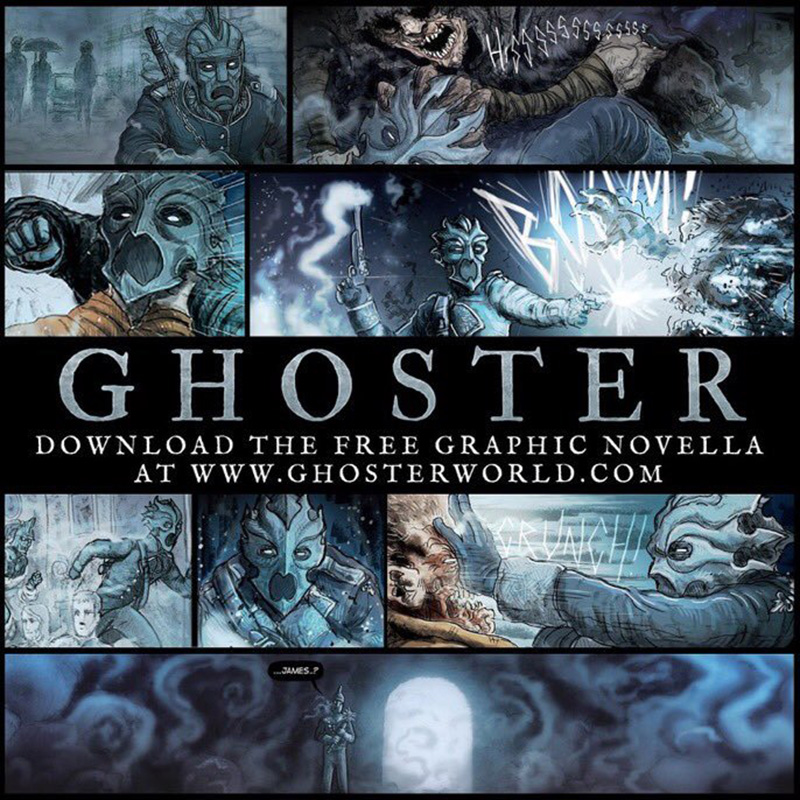 Well dear friends, autumn is well and truly here once more, at last October begins. The leaves fall, the days grow short, and the nights grow long. The perfect season for all things ghostly. And as long-time visitors to the Great Library of Dreams will know, around this time of the year, I do like to draw your attention to various new books and comics that bring what the great MR James would call a pleasing terror to your evenings, and indeed perhaps make a good gift for the lover of the weird and wonderful in your life.

Now you may recall that last year I did a little show on a trio of ghostly graphic novels created by the great Thom Burgess. In Microgoria 64 - Man-o-ghosts, we took a look at Malevolents Click Clickb his first foray into ghostly graphic novels, a tale inspired by the legendary haunting of 50 Berkeley Square, illustrated by Joe Becci and first appearing back in 2014 but reissued in a new edition last year. He followed this up in 2017 with an eerie tale inspired by the some of the darker corners of Kentist history in The Eyrie, this time illustrated by Barney Bodano, while last year he teamed up with Izzy Stanic to produce Hallows Fell a dark tale inspired by the modern ghost lore surrounding the Bluebell Hill area (which I reviewed here).

All of which are still available from his site https://manoghosts.bigcartel.com/ and indeed you can get the lot plus some ghoulish extra goodies as Bag O’ Horror for £20 of your earth pounds. And that does even include a rather handy bag too! 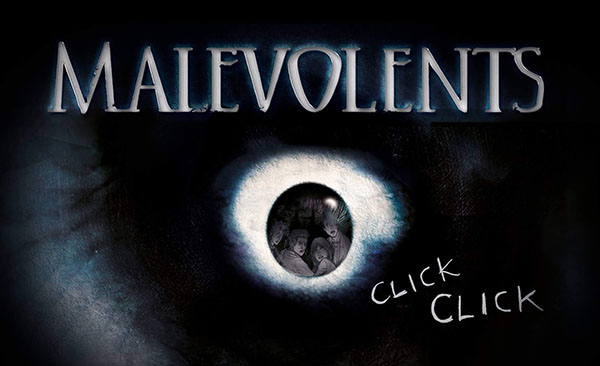 Now then when I was doing my research for the Man-o-ghosts episode, I did discover some old interviews to alluded to the fact that this trio of ghostly graphic novels were actually the first steps in a larger project. Now it all sounded fantastic, but as I said, these were interviews from several years ago, and I’m sure many of you will be familiar with the curse of vapourware - those mooted projects that never actually materialise. But in this case, I’m delighted to be able to tell you that in that this particular project has not only come to fruition, but it will be materialising on your plane of reality on today, October 1st 2019.

It’s entitled Ghoster, and is a 45 page and full colour graphic novel! And it is free, yes, I did say FREE, to download now from Ghoster World!

And as I was lucky enough to see a preview copy, allow me to tell you all about it. Now Ghoster has been a long time in the making. As Thom recalls it was on snow-bound train journeys to That London back in his early twenties that he began to imagine - and I quote - “a dark supernatural figure slowly making his way through the blizzard”. He also remembered being a child and hearing tales of ghoulish ghosts and sinister spectres. And recalled at the time wondering - and again I quote -

“If ghosts are such an issue why isn’t someone dealing with them? In much the same way as a Victorian rat-catcher (or ‘ratter’) would with vermin. From there the whole concept just unfolded."

And so, a story began to form, one that would grow and grow. Indeed the Ghoster graphic novel that is coming out, is just the opening tale in a longer saga.

However Thom is not alone on this epic journey, for he has some partners in crime. First up the Ghoster project was co-created with director Toby Meakins, a man who is no stranger to spectres and the supernatural. Over the past few years, Toby has been been making some truly excellent little short movies, kicking off with Message Storm back in 2003. Since then he has made The Fairytale of Forgotten Things and The Magic Mile both in 2005, The Condition and The Fable of Forgotten Things in 2008, The Secrets of Angels in 2010,Lot254 in 2012, and Breathe in 2013. Since then he has made another eerie short Floor 9.5 which became an episode on the Fox Digital series Bite Sized Horror in 2017.

And you can watch all of these shorts on his Vimeo channel and I would strongly recommend you do, and on your big telly if you can too! Floor 9.5 is a wonderfully creepy two minute horror tale, while Lot254 is a real little slice of terror involving a collector who discovers something terrible in an old camera. And while these movies are very short, they are beautifully filmed and Meakins has a real knack for creating cinematic stories that are very imaginative and have more complexity and depth in them than you’d expect is possible from a handful of minutes. Seriously go to his vimeo page and watch Breathe - a little tale of ghost you can only see when you hold your breath. And then I confidently predict you’ll do what I did - watch everything else there too! But do wait until dark… Go on, make an evening of it!

Anyhow also on Vimeo is the short trailer he and Thom created several years ago for Ghoster, and very bloody marvellous it is too. It’s not only a brilliant taster for the graphic novella but a rather fun little micro story all on its own.

Now for the Ghoster graphic novel, returning to art duties is Joe Becci (his site is here) who Thom previously collaborated with for Malevolents Click Click. As you may remember I was hugely impressed with art for that little tale, which Joe rendered beautifully - all in menacing monochrome and full of stalking shadows and unsettling atmosphere. Needless to say, Joe has knocked it out of the park again for Ghoster, however this time he’s bringing us glorious full colour to bring the fantastic and phantasmagorical world of Ghoster to life. And what a world it is, one of secret folk and shadowy houses, of strange things like quantum suits and shadow silver, plus of course, lots and lots of ghosts! It's gorgeous visual storytelling - he conjures up a dripping, autumnal London, where furtive meetings occur in shadowed sidestreets, dingy rooms where ancient rites are conducted under bare light bulbs, and even takes us into the washed up realms of the unquiet dead that overlaps with ours.

As for the storyline itself, I don't really want to say too much, for I think it's more fun to go in blind and slowly learn the secrets of the world of Ghoster, panel by panel, and page by page. Indeed this is a tale whose purpose is to gradually draw you into its world. All you really need to know is that there such things as ghosts, and yes, they are as terrible as your nightmares tell you. But there are others, who for centuries have stood between us and these Malevolents...

Whereas Thom's preceding trio of ghostly graphic novels were stand-alone tales, Ghoster is most definitely the first installment of what I hope to be an epic saga. There is a whole history of who the Ghosters are and how they came to be, not mention recounting their struggles with some of the most notorious spectres of all time. Indeed in this opening chapter we pay a visit to a very famous haunting, and readers of Thom's previous tales will have fun spotting links between them and Ghoster. which some of you may well be familiar with. In short, Ghoster is 45 pages of sheer delight, packed with spectral thrills and supernatural action set in an intriguing world you will be dying to learn more about.

Ghoster is free to download and you can get your copy from Ghoster World - And I highly recommend you do!

You can watch the wonderful short films of Toby Meakins here

And you can get Thom's previous ghostly graphic novels here 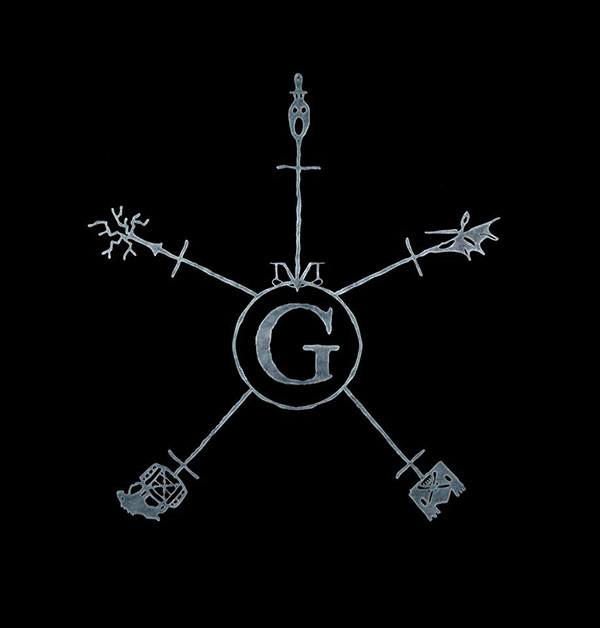