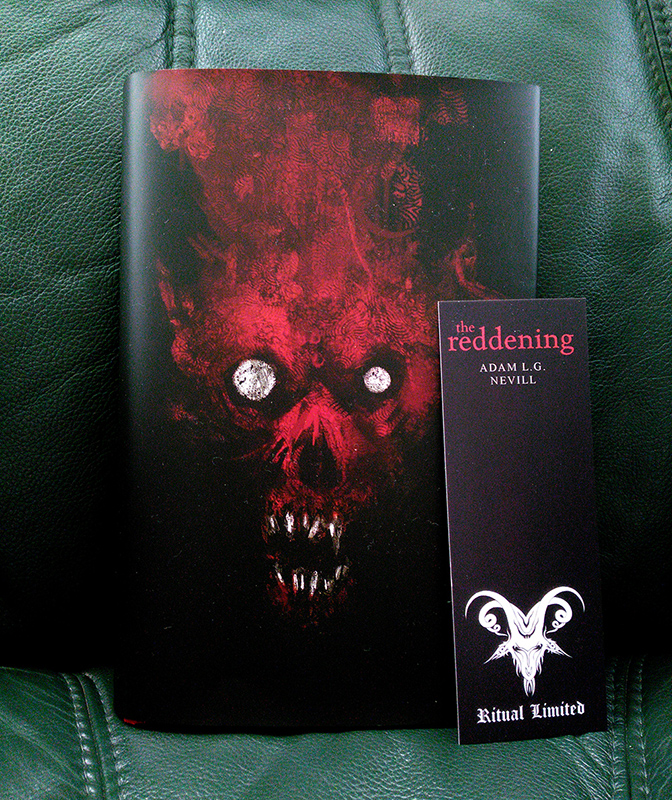 Halloween is here again, and this year the ancient celebration of ghosts and goblins is all the more pleasing for devotees of the weird and macabre as it sees the release of a brand new book by Adam LG Nevill. The Reddening is the ninth novel from the acclaiming rising star of British horror, and is being published by his own Ritual Limited imprint, in paperback, ebook and a limited edition deluxe hardback. And an audiobook version will be along in the near future too.

A new Nevill novel is always a delight, but not just as a welcome return of a favourite writer. As his regular readers know, Nevill has never been content to rest on his laurels; he’s not a writer who has found a formula to repeat time and time again. Rather each new book sees him crafting a narrative style that suits the tale he has to tell. And hence you never know exactly what is coming in a new Nevill novel, or how you are going to get it.

In The Reddening we find Nevill delving into the world of folk horror, a subgenre that has become very popular in recent years. Of course, this is familiar territory for Nevill, who has created many strange sects, odd beliefs and horrifying ancient survivals in his previous books. However The Reddening sees Nevill delivering his own new and typically imaginative take on the folk horror genre.

As the story unfolds, we learn of the discovery of an ancient cave system containing an important archaeological find - the remains of a settlement of early humans, all bones, flints and cave paintings. However this find is to throw light on more than just our own prehistoric past, as lifestyle journalist Kat will discover. The ancient caverns also have sinister links to more current mysteries, as Helene will discover as tries to retrace the last travels of her dead brother. And at the heart of this tale are the mysterious Red Folk. And the primal things they worshipped will prove to be much more than just products of primitive superstition and imagination.

Nevill’s stories are very much steeped in the history of weird fiction, and hence devotees of the macabre may spot echoes of classic spinechillers such as The Temple by EF Benson or The First Sheaf by HR Wakefield in The Reddening. But Nevill is never content to merely retread old ground and what’s more he loves to surprise his readers. And so the term “folk horror” conjures up a certain set of tropes - may poles, morris dancers, and taciturn villagers - if you are expecting a tale of two gals who team up to investigate a village witch cult like some middle England version of Scooby Doo, you will be in for a very rude and red-raw awakening!

Steering away from the usual medieval fair trappings, Nevill instead delves deep into the primitive origins of belief and folk culture; rituals in caves born of desperation, and terrible deals done with what waits in the dark. Rather than the stereotypical purple robed locals chanting at the standing stones, instead we have something far more sinister and insidious. The roots and reach of the Red Folk extend far further than some after the pub Dennis Wheatly lark, and the rites and rituals of The Reddening are horrifyingly and viscerally primitive.

Make no mistake, this is a brutal book, and while folk horror might be the most obvious genre tag, The Reddening can easily be described as survival horror. In the course of the narrative, our two leads will be pushed to their limits, physically, emotionally and mentally. However Nevill isn’t just laying on the grue and splatter here, and while there are some real red-in-tooth-and-claw scenes, there is also a solid mystery to be unravelled here. The Reddening carefully traps you in a web of growing suspense and approaching menace. And while the horror may be at times almost unbearably gruelling, the desire to discover the next twist in the tale will keep you gripped right to the very end. 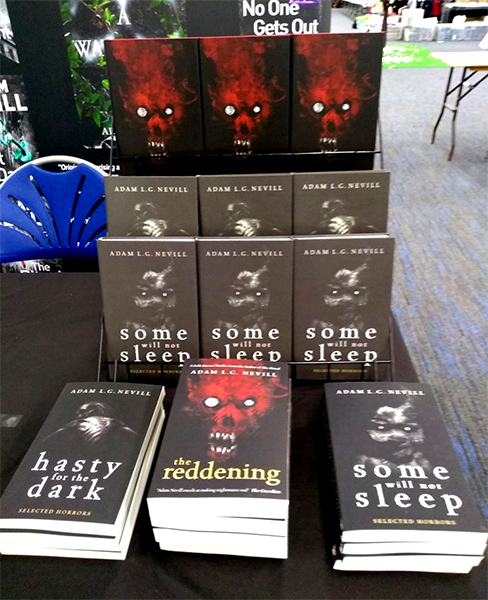 It is often thought that in horror one can take one of two paths - either choose the supposed high road of subtle terror and suggestion, or go graphically gruesome and throw the entrails about. However while in The Reddening we have scenes of real physical threat, dynamic fight-for-your life survival horror, we also have a growing atmosphere of dread, with some truly creepy scenes; eerie moments, born of pure fear and anxiety rather than blood and guts, that will linger in your imagination. But Nevill doesn’t stop there - out of the folk horror earth he summons up cosmic terror and awe. And these terrifying glimpses of what waits in the dark, reminiscent of the old daemon gods of Machen, Blackwood and Lovecraft, are all the more potent for being coupled with very mundane physical threats. The Reddening proves that you can have your cake and eat it, not only uniting but masterfully balancing what are often considered to be mutually exclusive approaches to horror.

Also present is a recurring element in Nevill’s fiction, and one that also adds a significant weight to his stories. And that is the fact that while his tales often feature some terrible supernatural force, at the same time the characters who must face these horrific forces from Outside are very much residents of the so-called real world. While Kat and Helene have to deal with the insidious darkness emanating from ancient bone-strewn caves, they still have family duties, jobs to go to, bills to pay. For while supernatural horror may be his chosen field, Nevill always conjures these terror in a context of social realism. Not only does this bring the horror closer to home, but it also give the stories an added weight. If you want to find it, there are always rich subtexts to his novels, and The Reddening continues this tradition in admirable fashion

One of the key elements of the folk horror genre is landscape, and in The Reddening not only do we have a horror born of the red earth of Southern England, but questions of how we live off the land and who controls it. As the story unfolds Nevill subtly explores the various links between the landscape and people, touching on class, agricultural decline, weak regional economies, rural crime and how we repackage our past and heritage as tourist attractions and local events. While never preaching or delivering heavy handed parables, these elements really give The Reddening an additional punch - it’s a book that is powerfully visceral in all senses of the word, but it’s also fiercely intelligent - this is powerful, razor-sharp writing.

If you have not read any Adam LG Nevill books before, The Reddening is a perfect introduction to his world. It’s a brilliant slice of contemporary horror from a modern master. It’s a book that demands to be red!

The Reddening is released on October 31st 2019, grab it and other fantastic tomes from Ritual Limited here! 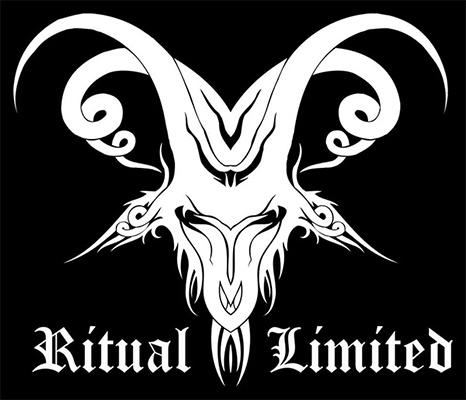