So then, what do we have here then? A tribute to an old Kinks song perhaps? Sadly not... although a movie inspired by Ape Man would be pretty cool. However, believe it or not, the truth is far stranger! Oddly enough the inspiration for this Stone Age horror would appear to be an old Joan Crawford movie - admittedly the last one she made, but a Joan Crawford picture nonetheless.

This movie was Trog - a 1970 British production, which was originally developed for cult Brit horror studio Tigon, the folks who gave us classics such as Witchfinder General, Blood on Satan's Claw and The Creeping Flesh. However this SF horror, directed by Hammer stalwart Freddie Francis, would eventually be made by Herman Cohen, an American producer who had been the driving force behind classic B movies such as I Was A Teenage Frankenstein and I was A Teenage Werewolf in the 1950s for AIP. The movie boasted further notable horror connections too, being co-scripted by John Gilling who made Plague of the Zombies and The Reptile for Hammer. And co-starring with Crawford was genre regular Michael Gough, a man who appeared in cult TV series such as Doctor Who and movies like Legend of Hell House, but is probably best remembered now for playing Bruce Wayne's faithful butler, Alfred in the Tim Burton Batman. 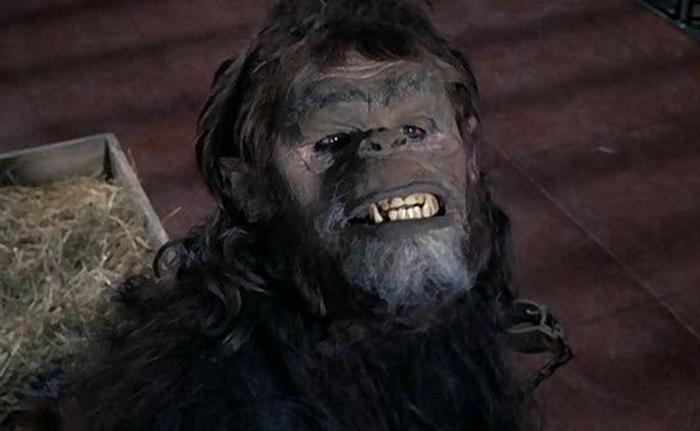 The plot of the movie tells the tale of one Doctor Brockton, played by Joan Crawford, who discovers a prehistoric proto-human, living in some caves in the heart of the English countryside. She captures the creature, which is identified as a troglodyte, and hence the strange simian survival is named Trog for short. The good doctor studies the caveman and attempts to teach him some modern human manners and how to speak. However local businessman Sam Murdoch (played by Michael Gough) isn't terribly happy about the situation, and the conflict between the two will lead to Trog escaping and having a bit of a rampage... Well, as much as the budget would allow...

Sadly however despite its impressive pedigree, Trog did not join the ranks of the classics mentioned above. Rather it went to the other end of the table, and is now often recognised as a gem of a different kind in the murky world of so-bad-its-good movies... But hey, the monster star of Trog did look cool, and with a liberal splattering of blood, made for a memorable card! 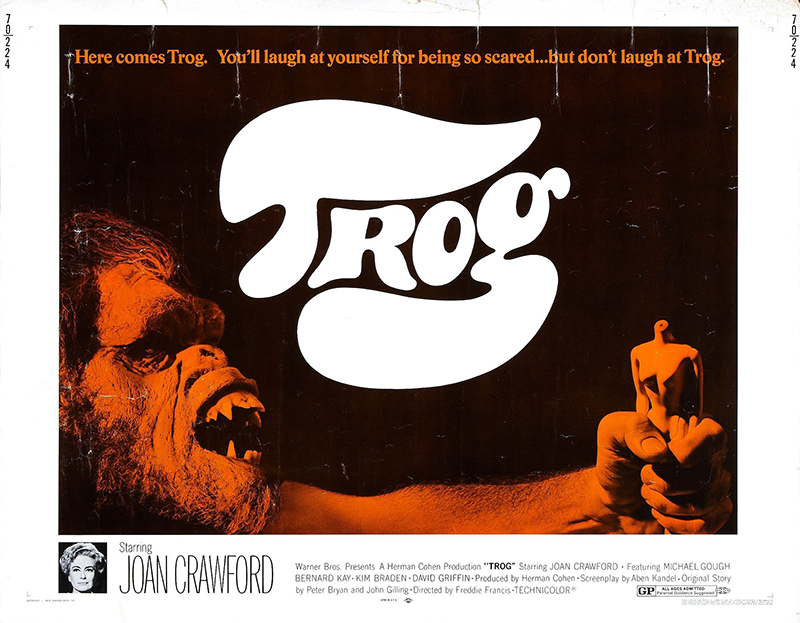