Once again here we have a direct swipe from an old movie still. And this vicious looking savage actually comes from The Phantom Creeps a 1939 serial from Universal. This tale, told in 12 episodes, sees government agents battling the sinister Dr. Zorka played by Bela Lugosi, in his last role in a movie serial. Doc Zorka is - of course with a name like Zorka - a mad scientist possessing all kinds of super weapons, including an invisibility belt, robot spiders, and a fragment of meteorite capable of sending whole armies into suspended animation! But his star invention showcased in the serial was this creation, dubbed simply 'the Robot'!

...So yes, the Cannibal is actually a rather cool looking android! A cut above the usual tin box and TV aerials that most early screen robots sported, I'm sure you'll agree! And speaking of design work, I particularly like the way that the fabled Unknown Artist has turned the flexi-tube sleeves of the Robot's arms into tribal war paint/tattoos for the Cannibal! Nice work fella! 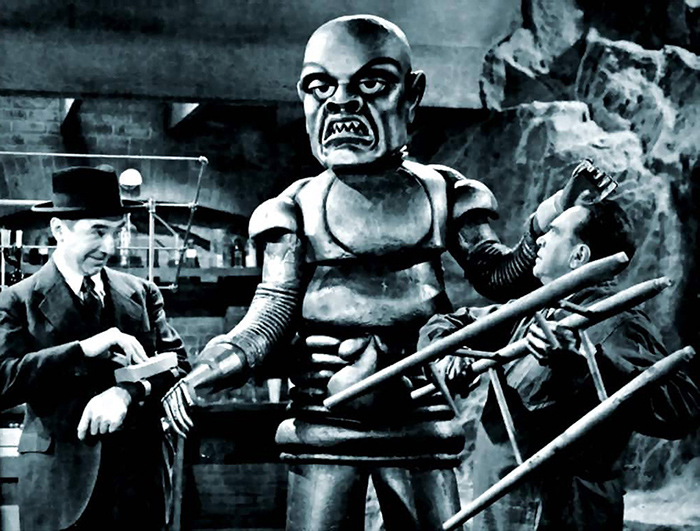 However our work is not yet done here... For as regular delvers in the Tomb of the Trumps will know, these old Horror Top Trumps often 'borrowed' from multiple sources, and hence I had the sneaking suspicion that I had seen that severed head before. Using my best detective skills, I noted that little bonce's wonky eyes, and this gave me the lead I needed... For there is one famous monster that usually sports off-kilter peepers - Quasimodo, the Hunchback of Notre Dame. And sure enough, this severed head bears an uncanny resemblance to one of the Hunchback's more obscure movie appearances - namely when he was played by the great James Cagney!

Now before you rush off to IMDB or dust off your tomes on horror movies, let me confirm that Cagney never actually appeared in a screen adaptation of Victor Hugo's famous novel. But Cagney did play the role of Lon Chaney Senior in Man of a Thousand Faces, a 1957 biopic of that legendary silent era actor. And in that movie Cagney donned the latex to play Chaney shooting the classic 1923 silent version of The Hunchback of Notre Dame. Now the make-up job in Man of a Thousand Faces is actually significantly different to the Quasimodo created by Chaney, but it is a dead ringer for the blood dripping noggin on the Cannibal card! 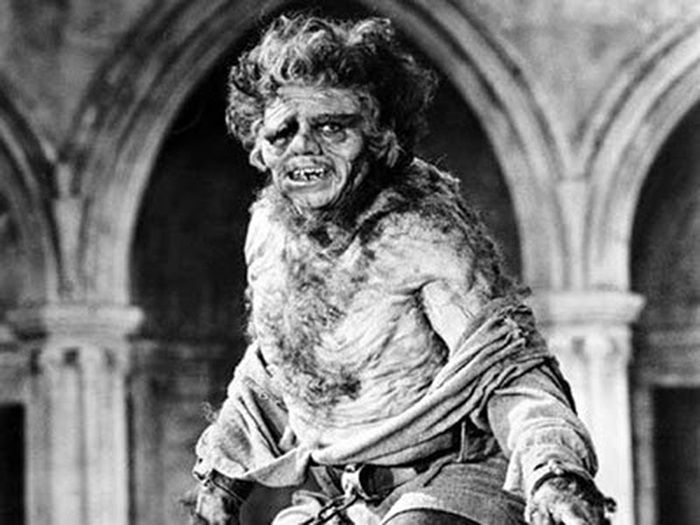