CREATURE FROM THE BLACK LAGOON

So then, absolutely no prizes for identifying this one! For it is one of the all-time great movie monsters - the Gill Man! He was the last addition to the panoply of Universal monsters, coming when the original house of horrors was moving away from the gothic chills of Drac and Frank and into the terrors of atomic age SF. Surfacing in 1954, The Creature From the Black Lagoon is now recognized as a classic monster movie, and was directed by Jack Arnold in an extremely fertile period that saw him directing other classics such as Tarantula! (1955) and The Incredible Shrinking Man (1957). In true Universal fashion, it was followed up with two sequels - Revenge of the Creature (1955) and The Creature Walks Among Us (1956), but of course also in true Universal fashion, the sequels did lessen in quality with each subsequent movie.

A redesigned Gill Man would later appear many years later in Fred Dekker's homage to the Universal horrors, The Monster Squad (1987), and our amphibious friend would also make a guest appearance in The Munsters as Uncle Gilbert, where it was revealed he had a fortune in old Spanish dubloons and used to be a politician! Speaking of comedy capers, many folks think that as a late addition to the Universal canon, the Creature was spared a run-in with Abbot and Costello - however this was not the case. For while our fishy friend was avoided an appearance in one of the horror-comedy feature films that finished off the rest of the Universal horror crew, the Creature did appear in a sketch with the comic duo in the Colgate Comedy Hour TV show - in fact this was how Universal's newest monster was introduced to the world as part of the marketing hype for the first movie! 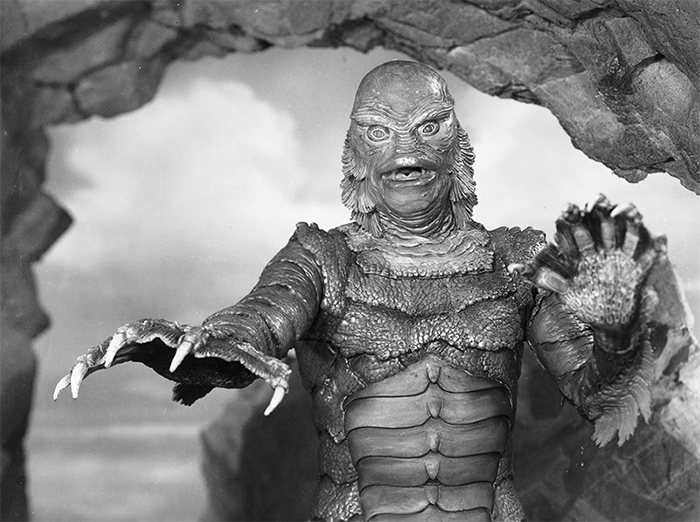 While on the Creature trivia tip - the first movie was released in 3D, and indeed is still regarded as one of the best movies ever to utilize this cinematic sorcery. However contrary to popular belief, the movie didn't use the red/green anaglyph 3-D method - apparently like nearly all of the 3D flicks of the '50s, it used an earlier version of the polarised 3D system that modern-day 3D movies use! The idea that the movies in the 3D craze of the 1950s used the two colour system derives partly from movies like Creature From the Black Lagoon being reissued to the theatres in the 1970s with the anaglyph systems doing the 3D shenanigans.

A remake of The Creature From the Black Lagoon has long been promised, but despite various projects being mooted since the 1980s, and assorted big names being attacked to it, so far the Creature has not resurfaced. He was intended to have a guest appearance in the mega-turkey Van Helsing (2004) but our wily amphibious friend dodged that bullet... On a happier note though, what appears to be a very close relation of the Gill-man starred in Guillermo del Toro's Oscar winning The Shape of Water (2018).

For a full history of the origins and evolution of the Gill-man, check out my podcast series The Chronicles of the Creature