Well then, after the easy-peasy cards to identify last time, our next card presents quite the challenge. Indeed over the years, many have thought that this card was actually merely the product of the demented imaginings of the unnameable Horror Top Trumps artist. And at first glance, you may be forgiven for thinking that perhaps there was a title mix-up with going here too. I mean, surely that hooded bloke with the scythe on the Devil-Priest card should be Death not this goggle-eyed muppet!

Ah Death, possibly one of the most enigmatic of all the Horror Top Trumps cards. Whole generations puzzled over it. Firstly everybody wanted to know why this card didn't show the expected skellington and scythe. While rhe more technically minded Top Trump players wanted to know how in the seven names of Hades was it possible for Death - Death itself for Pete's sake - had a Killing Power of less than 100. But there were other troubling questions too - the more eagle-eyed amongst us wanted to know whether Death was actually being pictured as wearing a large wide brimmed hat, possibly a sombero... I mean, look at that building in the back ground! Is that one of those sun-bleached little churches that always appear in spaghetti westerns?

But as perplexing as all the above queries where, there was one question that, if you pardon the pun, trumped all the rest. And that was simply - What. The. Hell. Is. THAT?

Well dear friends, I can now at last reveal the truth! Although the bizarre nature and slapdash penmanship of the card do rather suggest that this was the product of a deranged imagination, Death is in fact another rip-off, although admittedly a somewhat obscure one. For the card is actually based on a mask made by the legendary Don Post Studios.

Founded by Don Post (obviously), this outfit began producing novelty items in the late 1940s, and by the 1960s had become famous for their full head latex masks. Post soon brokered a deal with the likes of Universal and began producing masks of the famous movie monsters based on the original make-ups. What's more they took casts of living cult icons such as Tor Johnson and William Shatner to make masks in their image. Their masks were so good that they began to be used in movies and TV shows. Famously, Michael Myers' mask in the original Halloween is actually a modified Post Shatner mask! And the range of deadly masks from Silver Shamrock in Halloween III: Season of the Witch are Post creations too. However aside from doing classic movie monsters and having the licenses to produce Planet of the Apes and Star Wars masks, Don Post Studios also created their own original creations - one of which was this chap (no doubt inspired by the Star Wars spawned SF boom) who appeared in the 1977 Don Post catalog - the Coridian Alien! 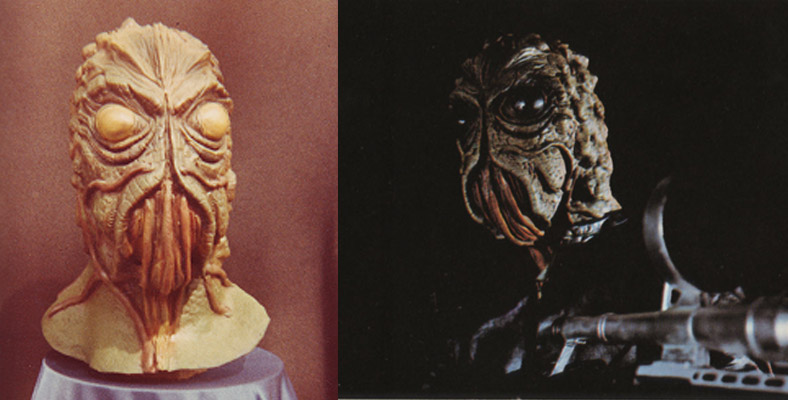 Yes, ladies and gentlemen I believe we have a match! Incidentally Top Trumps wasn't the only thing to recast the Coridian Alien mask either. As I previously mentioned, Don Post masks were of such good quality that it wasn't unusual for them to be used in movies and TV, and hence the Coridian Alien appeared in the short-lived Logan's Run TV series. In the second episode, The Collectors, which aired on 23rd September 1977, Logan and his companions encounter nefarious shape-shifting aliens disguised as humans. This sneaky lot were collecting samples of different lifeforms for the usual conquer everything scheme, and the Coridian Alien masks were used as the true monstrous features of these intergalactic ne'er-do-wells revealed in the finale !

Given their brief screen time in the Logan's Run TV series episode, it's unlikely the Horror Top Trumps artist copied it from there. However considering that Don Post Studios were advertising in a variety of horror and SF magazines in the '70s, it's far more likely the Coridian Alien was discovered in such an ad. Indeed it would seem likely that the mags like Famous Monsters of Filmland and Starlog were the source of many of the images cribbed for the Horror Top Trumps, and our next card bears this out... 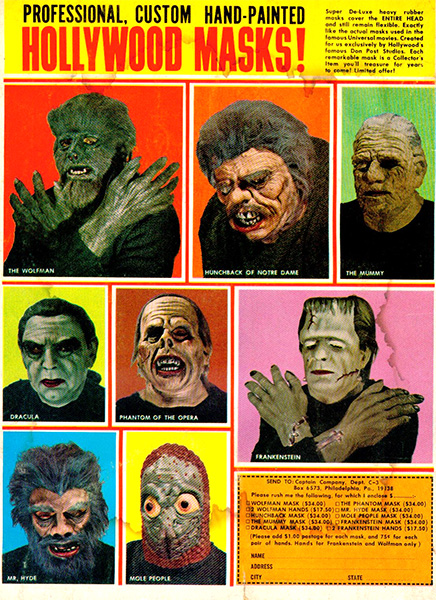