And so, who's this jolly little fellow? Surely he must be someone terribly important as he was chosen to be the title card of the Horror Top Trumps Devil Priest pack! However in the world of vintage Horror Top Trumps small things like sense and reason rarely played an important role...

In the 1970s, there was a huge boom in horror related magazines, with the charge being led by Warren Publishing. Now famously horror comics had been effectively banned in the US since the mid 1950s, thanks to the Comics Code Authority. However having produced two successful magazines celebrating monster movies - Famous Monsters of Filmland and Monsterworld, the ghouls at Warren realised that the Code didn't cover magazines, as they were larger and pricier and hence fell outside the CCA definition of a comic. Therefore in 1964, Creepy was launched, and to absolutely nobody's surprise, well anybody sane at least, the world didn't collapse in a riot of moral decay. And so Creepy got some siblings, Eerie and Vampirella. The mix of articles, comics strips, and text stories proved to be highly popular, and other companies such as Skywald were soon producing rival publications. And by the early '70s, even the mighty Marvel had got in on the act with a whole slew of horror mags published under the imprint of Curtis Magazines, which delivered a similar blend of text, comic strips, and features.

One such publication was Vampire Tales which ran bi-monthly for 11 issues, from August 1973 to June 1975. As well as the usual one-off anthology stories, the magazine starred Morbius the Living Vampire, a former Spiderman villain now getting a new lease of life in pure horror comics, and introduced to the world Satana, the Devil's Daughter who would later migrate to the Marvel superhero universe. Now evidently the mysterious Horror Top Trumps artist was scouring the monster mags of the day for things to pinch, for who do we find menacing Morbius on the cover of issue #3? Why it's Devil Priest! 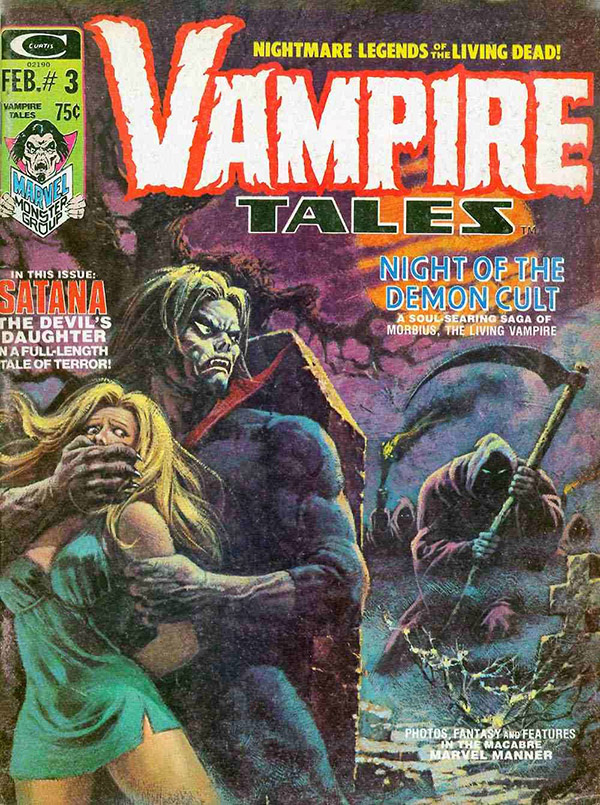 This cover was done by artist Luis Dominguez, who worked on other mags for Marvel such as Dracula Lives and a host of DC horror comics such as House of Mystery. Swamp Thing, and Ghosts. But while he may have traded his purple robe for a more tasteful blue one, and the poor sod has been flipped from left to right, but it is unmistakably Devil Priest who is the leader of the Demon Cult pictured above! Quite why this particular image of an extremely obscure one-off villain got to have a whole Horror Top Trumps deck named after him is something of a mystery, although it has to be siad, he does look very cool. I guess sometimes that enough!