Now then, thankfully our next card is a lot easier to identify, albeit perhaps being a little confusing. Here we have a great example of the scatter-brained approach the Horror Top Trumps creators took, for as we will discover as we make our way through the packs, quite often we get an image clearly of one character but being given the name of something entirely different or no sensible reason whatsoever!

So the nto tackle the title first - Dr Syn was actually a character created back in 1915 by novelist Russel Thorndike. He was a clergyman who led a double life as a smuggler called The Scarecrow. Thorndike penned several books detailing his swashbuckling adventures, and later his tales were adapted in feature films, radio plays and comics. However despite the slightly spooky edge to the good Doctor's smuggling disguises, and one of the movie version being made by Hammer and starring Peter Cushing, Dr Syn is actually not a horror character.

And the same could be said of the sinister fellow pictured whose image is actually on the card, with the added irony that he could have been found next to the Dr Syn novels in the bookshops. For this card depicts a contemporary character who also appeared in a string of adventure novels, and also later appeared in movies, on the radio, and in comics too. For the Horror Top Trumps 'Dr Syn' is none other than the villainous Fu Manchu invented by Sax Rohmer. To be specific, the image on the card is a fairly faithful recreation of the still shown below which is taken from Brides of Fu Manchu (1966), which was the late great Sir Christopher Lee's second appearance as the Lord of Strange Deaths. Alright. the artist has changed the colour of his robe and added a scar over one eye but he's fooling no one! I'm guessing the additional chained body is stolen from somewhere less too but sadly it's too short of detail to make a definitive identification. If you recognise this chained fella, concerned relatives are urged to contact Denis Nayland Smith of Scotland Yard circa 1930. 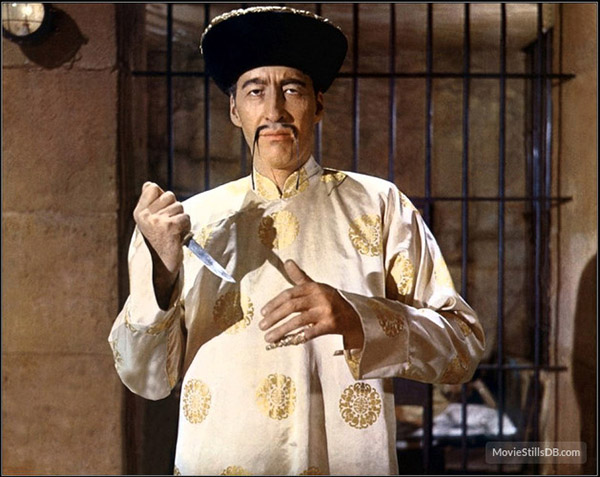