Now you might think that this is just some generic dude with an axe, the kind of guy you always used find hanging out on metal album covers circa 1985. However, note the odd squatness of his figure... Yes, I know, it's like watching telly at the house of an elderly relative who hasn't worked out what the 'Change Aspect Ratio' button on the remote does, and hence everyone looks squashed as if they came from a high gravity planet!

However to this seasoned Horror Top Trumpologist, this card doesn't say "Hey it's a medieval dude from Jupiter"! Rather it suggests someone had to flatten their tracing in order to make it fit the card format! So where is this sinister headsman from then? Pinched from a comic? A rip-off of a great fantasy artist? Well, in this case it's actually both! For the original image is a painting by the legendary Frank Frazetta, which is called simply 'Executioner' and here it is - 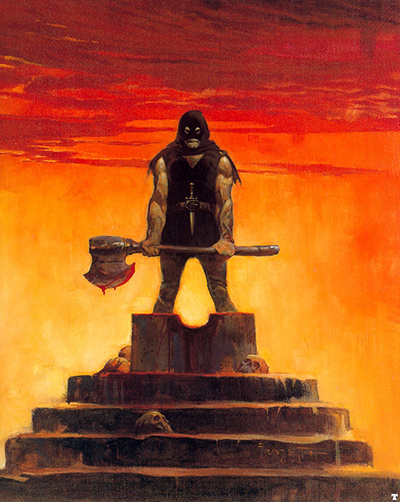 It was one of a number of paintings Frazetta did for magazine covers, in particular for Warren Publishing, who in the mid 1960s had successfully resurrected horror comics. The Comics Code introduced a decade earlier had effectively outlawed tales of monsters and murder, but the ghouls at Warren spotted a loophole and published their tales of terror in black and white, and as a monthly magazine - effectively in a format that the Comics Code Authority didn't define as a comic. But as the likes of Creepy, Eerie and Vampirella only had monochrome art for the strips inside, Warren had a policy of adorning their mags with glorious fully painted covers, and that's where the likes of Franzetta came in.

Interesting last titbit of horror comics history - this was actually the last cover Frnzetta painted for Warren, appearing on the cover of Creepy #17 in October 1967. Apparently by this point, the low rates of pay and a lack of artistic freedom led the legendary artist to move to pastures fresh... 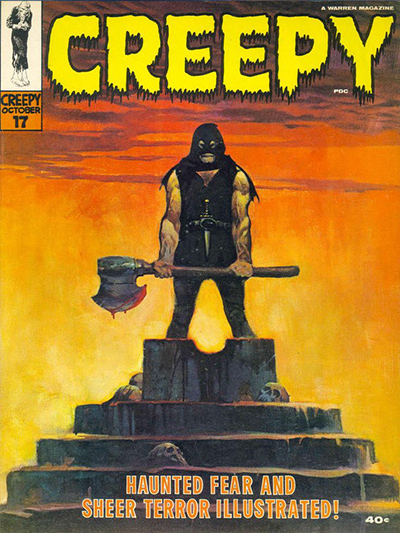