And so, we come to our next card, one which features a face that any old Doctor Who fan will recognise instantly!

The Daemons was the fifth story and final story in the eighth season of Doctor Who, airing in five parts from 22nd May to 19th June 1971. It was the second season for the Third Doctor played by Jon Pertwee, and while this incarnation remained exiled on Earth, this second run of stories introduced a regular villain, the Doctor's arch enemy The Master, played by Roger Delgado. Hence in all the Season 8 tales, no matter what weird menace was threatening the Earth, the Master inevitably had a black gloved hand in it somewhere.

Therefore when an archaeological dig at an ancient barrow was going to awaken an alien from the dawn of time with god-like powers, naturally the villainous Master was on hand to exploit the situation. And as the alien in question, Azal, is from a race known as The Daemons, and whose image inspired our planet's legends of devils, the Master naturally forms a black magic coven to raise psychic energy to to waken this powerful slumbering being... Anyhow, you don't need a full plot summary here - go watch the story instead! But here's Azal in in the very publicity shot copied for the card (and signed by actor Stephen Thorne who played him! ) 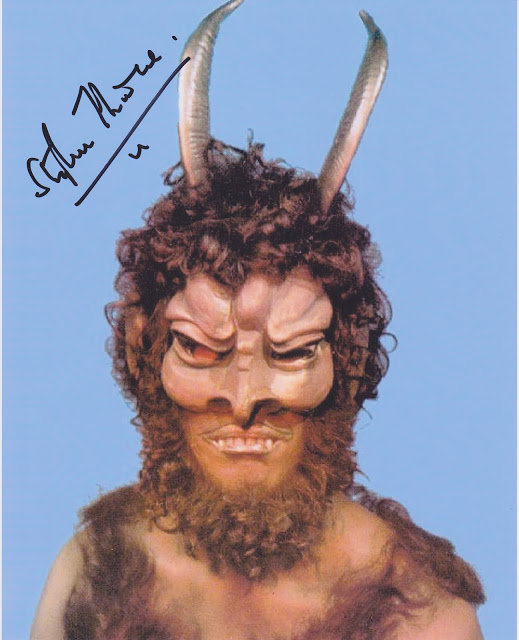 Incidentally this is not the last time we will encounter a creature 'borrowed' from 1970s Doctor Who but more on that another day! Finally, we should also note that the erroneous, and probably for the purposes of copyright dodging, title of the card 'Fire Demon' may well have been lifted from another old classic. For in Jacques Tourneur's classic Night of the Demon (1957) (Curse of the Demon in the US), 'Fire Demon' is how the titular beast is referred to. However it equally could have just been a lazy and generic title slapped on there... Such are the mysteries of the Tomb of the Trumps!