Now this was a very tricky fellow to track down! Indeed many of my predecessors who have probed the mysterious and arcane origins of the Horror Top Trumps concluded that this was a rare example of a wholly original piece by our Unknown Artist. And in all fairness, there seemed a reasonable assumption as there was no relevant rat-man in any monster movie that could have served as a model for this beastie. However there was something naggingly familiar about him, something I recognised even when I had these cards as a nipper, but could never quite place... That is until now!

First up, the whole rodentine thing is something of a red herring, for what we have here is a bit of artistic collage. Yes, this is actually a rather better known monster disguised with a new head. Now the actual rat bonce could have been copied from almost anywhere - not wanted to sound rat-ist here, but they do all look alike! However given our Unknown Artist's usual selection of sources for images to copy from, I'd reckon a still for either killer rat flick Willard (1971) or its sequel Ben (1972) as the model for the rat head itself. But the main figure comes from a rather less obscure source.

Now the key clues here are the barred window and the ripped white shirt. Ring any bells yet? No? Well, how about this... The bars suggest a scene in a prison cell, while the style of the shirt, one of those floppy affairs favoured by Romantic poets, suggests a ye olden days settings. Furthermore the fact it is torn rather suggests a violent bodily transformation has occurred. And the image of a rodent headed man does in itself conjure the words 'wererat'. So then, given that the rat head is paste-on job, we should be looking to werewolf cinema!

Now then, can you name a movie in which a man transforms into a werewolf while in jail? Well, if you are in anyway acquainted with cinematic lycanthropy, I'm sure you know the answer - Hammer's 1961 classic Curse of the Werewolf. So then, I began scouring stills from that movie, and just for good measure it's demi-remake from Tyburn Legend of the Werewolf (1975), which also features a floppy shirted wolf-man. However rather frustratingly I could not find a photo that matched, and it looked like the trail of the Killer Rat had gone cold...

...Until I remembered our Unknown Artist' previous form for cribbing from 1970s monster mags. Then it clicked - and I knew why this image had always been oddly familiar. In 1976, British comics maestro Dez Skinn launched the House of Hammer, a monthly mag devoted to the legendary horror film studio. And as well as articles and features on classic horror flicks, each issue boasted a comics adaptation of a classic Hammer movie by some of the finest creators working in the field at the time. Now Issue #10, published in March 1978, saw a gorgeous comicstrip version of Curse of the Werewolf, with art by the great John Bolton, and flipping through my aged copy, I found at last the template for the elusive Killer Rat! 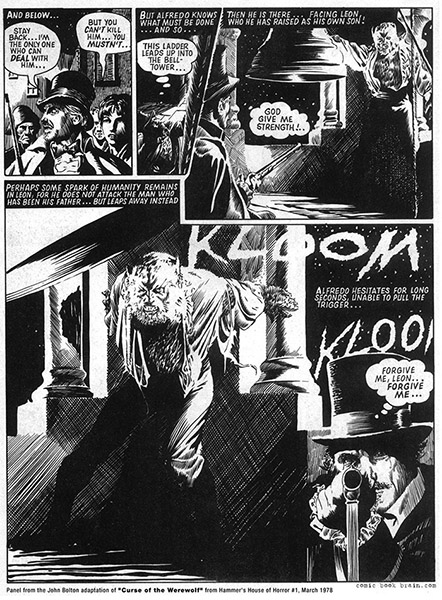 Note the pose and the distinctive shirt tatters - large drape on the left, and a pointy shred flapping out to the right! On a purely personal and utterly self-indulgent note, I must say it's so satisfying to finally find the origin of Killer Rat - this one has been bugging me literally since I first got the Devil Priest pack three decades ago! And thankfully the next exhibit in our rogue's gallery is far easier to identify! 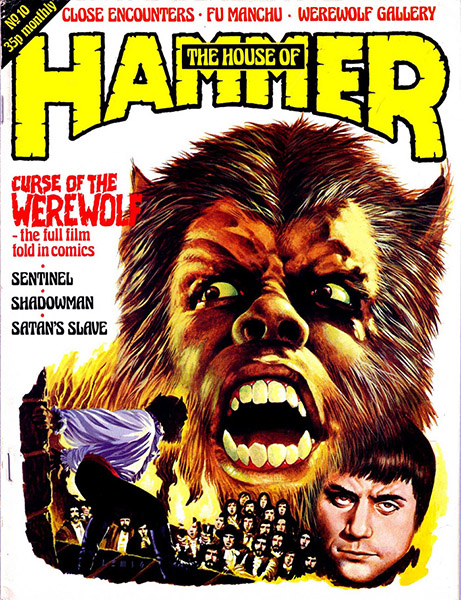