So then, on our next card, it looks like we are in one of the better neighbourhoods in Monster Movie Land! Or at least, so it first appears...

Ah King Kong! A true classic! Up there with Dracula and Frankenstein in the ranks of the monsters everybody on the damn planet knows! However - and prepare for a shock here - this ISN'T King Kong. Nope, it's not the Beast from Skull Island in any of his assorted screen incarnations! And yes, that does included mangy looking suitamation versions from the likes of Toho. However this is a close relative of Kong, albeit one only linked to the cinema's most famous movie primate via a little bit of legal DNA.

Basically the story goes like this... Back in the 1950s, exploitation kings AIP had had great success in taking old movie monsters and giving them a modern spin - hence Universal's Wolf Man spawned I Was a Teenage Werewolf (1957), Victor Frankenstein gained a modern day descendant in I Was A Teenage Frankenstein (also 1957), and the Count inspired the teens menaced by vampires flick Blood of Dracula (yes, 1957 again).

Now then the genius behind I Was a Teenage Werewolf was a chap maned Nat Cohen, who thought the time was right for a giant gorilla thriller along the lines of King Kong (1933) but now in glorious colour! And given the success of AIP's teen monster trilogy, he was soon given a big bag of cash to go and make that happen. And hence he threw a large wedge at RKO - $25, 000 in fact - for the rights to the Kong name, and work began on a movie with the working title I Was a Teenage Gorilla. I kid you not! However rather than the teen Americana that informed the previous monster movies, this project soon took a different direction. It skipped over the pond to merry England, and Konga (1961) was born! 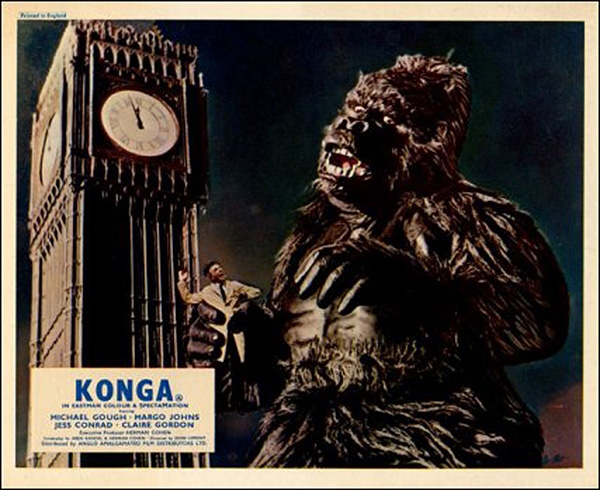 Now in this movie, instead of the usual go off to some remote jungle place and capture one helluva monkey plot which served various versions and sequels for King Kong and Mighty Joe Young so well, Konga has the well meaning but mad boffin Dr. Charles Dexter (played by genre legend Michael Gough) experimenting with a growth formula. He makes all kinds of giant plants and animals before testing it on a young chimp... Now swiftly stepping passed awkward questions such as how does a growth formula manage to turn one species of ape (i.e. a chimpanzee) into another different one (i.e. a gorilla), Konga surprisingly doesn't have the monster-sized monkey escape and run amok as usual. Instead our prodigious primate is hypnotized by the wicked Dr. Dexter to go and wreak revenge on his rivals and enemies!

Is it a good film? Well, not really... But a prime slice of monkey business? Certainly is! While the movie isn't as fun as the Godzilla-knock-off Gorgo who alos menaced 1960s Blighty, Konga is certainly more entertaining than The Giant Behemoth, a radioactive saurian that stomped London in the same era. But like Gorgo, Konga got his own comic series from Charlton, which you can read for free here! 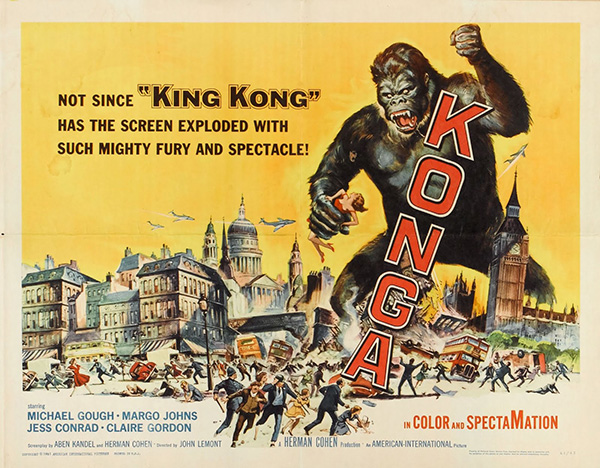