Now I'm sure this chap needs no introduction to kaiju fans, for "The Living Gargoyle" is in fact one of Godzilla's famous foes - the intergalactic space bastard Gigan. In the original cycle of Big G movies, the Showa series, this cyborg kaiju was first summoned to earth in Godzilla Vs. Gigan (1972) by aliens from the M Space Hunter Nebula, and called in once again by undersea miscreants from Seatopia the following year in Godzilla Vs. Megalon (1973). He would later appear again in more recent times in the third cycle of Godzilla movies, the Millennium series, in Godzilla: Final Wars (2004), which was actually the final Big G movie from Toho (well, at least until recently). In this flick, which features a whole array of famous kaiju, Gigan got to appear in two forms - in his original incarnation, and then later resurrected with new cybernetic enhancements, most notably twin chainsaws replacing his hook hands! Fun fact - Gigan was the first of Godzilla's foes to make the Big G bleed! And he was an utter bastard too - aside from some distinctly dirty fighting techniques, twice the big cyborg abandoned the monster we was allied, fucking off back into space when Godzilla was winning! Yes, there was a large element of chicken in Gigan, and not just in his design!

However we do have a further possible mystery in this card. As we have discovered previously, our Unknown Artist was prone not just cribbing the monsters but also their victims. And given the prone chap on this card has a very distinctive hand shape on his out-thrown arm, I rather suspect he has been copied from a movie still. But so far I've been unable to place the poor disemboweled sod... But if you recognise him, do drop me a line! 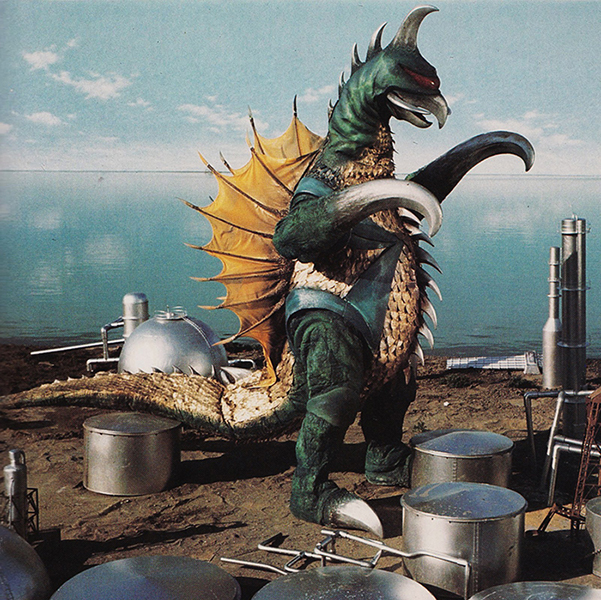