Now this scaly fellow I more or less recognised straightaway back when I was a nipper, for I recognised it from a still I'd seen in a monster movie book I'd had out from the library. It was in fact copied more or less exactly, with the only artistic flourish on the card being the deliciously over-the-top dribbles of blood. The still in question was from the classic 1958 SF horror It! The Terror From Beyond Space. However when I came to write this week's edition of Tomb of the Trumps, could I find that picture anywhere? Could I hell! But just as I was beginning to think I'd imagined it, a good friend offered to go through his collection of monster movie tomes, and thankfully for my sanity, we discovered the elusive still in Dennis Gifford's A Pictorial History of Horror Movies, a fantastic tome that has many rare stills reproduced within. 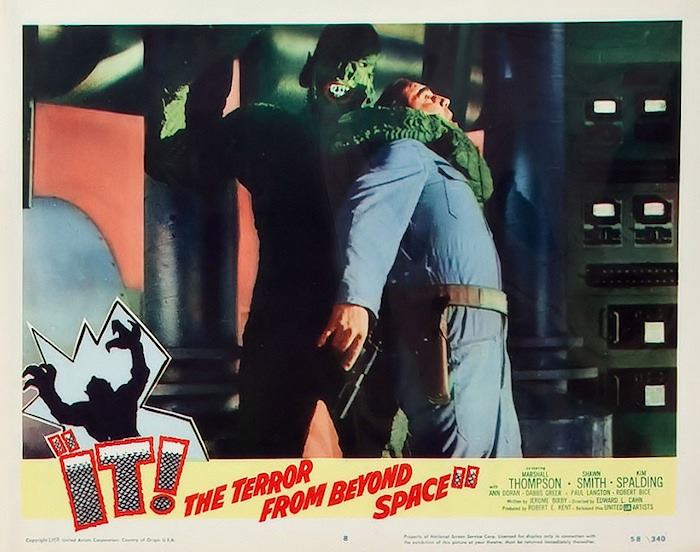 Anywho, what of the movie? Well, It! The Terror From Beyond Space is a smashing tale of some brave astronauts who after touching down on an alien world to mount a rescue mission, discover they have picked up a monstrous hitchhiker. The unwelcome guest lurks in the bowels of the ship and proceeds to chomp down on the crew one by one. And it... I'm sorry, I mean... It! nearly scoffs the lot of them until our heroes come up with the cunning plan to blow the ugly bugger out into space through the airlock!

And if you are thinking old Mr Jim is getting a bit befuddled and confusing a 1950s monster flick with a certain Ridley Scott classic, think again! For It! The Terror From Beyond Space was indeed a prime influence on Alien - indeed I recall reading reviews of that movie back in 1979/80 which didn't hail Alien as a modern classic but actually dismissed it as a gorey remake of It! The Terror From Beyond Space. How times change!