Now then, here we have an genuine rarity! For despite looking up assorted alien invaders down the decades, we top trumpologists have never found a decent match for this chap! Some have suggested it is based on the titular Creature of Destruction (1967) but I remain to be convinced of anything other than a very flimsy passing resemblance.

However the saucers behind him do certainly have a vintage science fiction origin. For they are slightly modified copies of the alien craft shown in posters for the classic Ray Harryhausen movie Earth Vs. The Flying Saucers (1956). 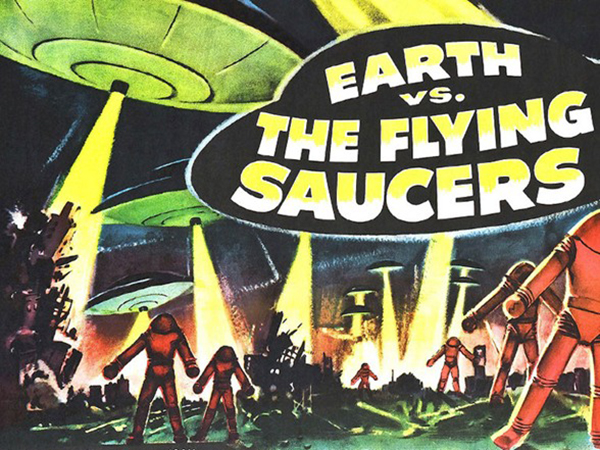 Now the lighning flash on his space suit does also suggest old school SF too. Buster Crabbe in the first Flash Gordon serial back in 1936 first popularised the lightning zig-zag design, and countless other spacefolk followed his lead! 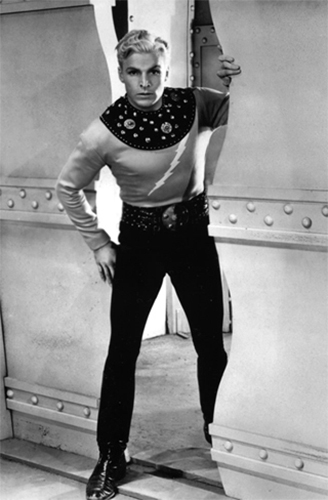 As for the rest of our mysterious Martian's body, well the arm looks somewhat grafted on! In fact, that hand and gun look distinctly comicbooky to me, but the pose is so generic I've not yet tracked down a match. However all of this still leaves us wondering where the Martian's face comes from. Now when I originally covered this card on my blog a few years ago, I did just admit defeat. However there was always something irritatingly familar about this damn Martian, and despite combing the annals of SF I could never find him.

But when I was revamping the Tomb for this website, I had an idea - perhaps I was approaching this problem from the wrong direction. So I put all the scifi aside, and just looked at the Martian's features, and asked myself what they reminded me of. Well, for a start it was those somewhat sharky teeth that rang bells, and the staring eyes were vaguely familar too. As was the distictive nose, and curiously pointed ears. And when I looked closely at the strange contours of his bald head, the penny dropped.

Now in other cards in these decks our Unknown Artist has often took ocular liberties with his subjects - see for example Thor and the High Priestess of Zoltan. So possibly the cat-like eyes were an embellishment. Likewise the antennae looked a bit sketchy too. And when you ditch those and ignore the saucers and spacesuit, I suddenly realised who this Martian really was - once you stopped racking your brain for space monsters, the strange-shaped slaphead and sharky teeth were a dead giveaway! For there is only one set of choppers like that in cinema, and hence I believe that this alleged invader from space is none other than Graf Orlock from Nosferatu once again! 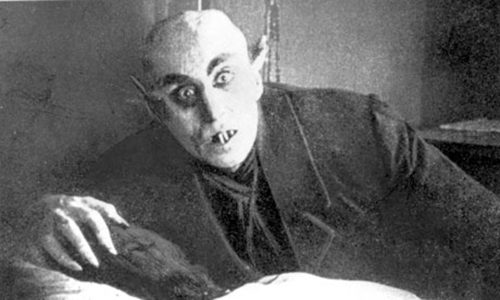 Previously the iconic silent era bloodsucker had turned up as a severed noggin in the hands of the Headhunter, and givne the number of times Lon Chaney Snr. turns up in these decks, it was no surprise that Max Schreck should geta second outing. I believe that the still is above is indeed the model for the Martian - and while it may have been a somewhat blurrier reproduction our Unknown Artist was working from, the shadows and lines on the face are a very close match!