Ah the dear old Incredible Melting Man! Back when these cards first hit the stores, this chap needed no introduction as he was something of a playground legend. Thanks to ill-timed TV spots, inappropriately scheduled trailers, and of course assorted reports from older siblings, 1977's The Incredible Melting Man was one of those titles that a lot of kids desperately wanted to see. But thanks to the UK's film classification rules, that wasn't an option for the slavering playground gorehounds. Daft really, as the tale of an astronaut who turns into a huge puddle of goo had kid's entertainment written all over it! After all, this was the era when cans of Slime were all the rage!

Alright, there was all that business with eating folks to slow down his melting but we could have handled that! We didn't buy that "first new horror creature" lark either - we'd all figured out that this was just a splattery version of The Incredible Shrinking Man! And provided there wasn't a freaking terrifying giant spider in it, most of us reckoned we could handle seeing ol' Melty gnawing on a limb or too. But sadly we also knew full well that a movie like this would never get shown on the telly... 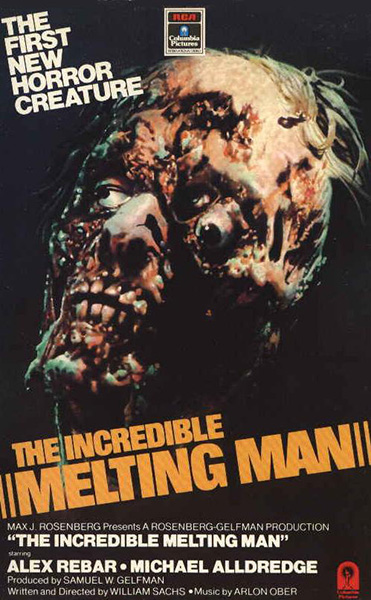 ...But then a few year later, there came the dawn of the home video era! Or perhaps more accurately, the dawn of the little shops whose owners would happily hire out all manner of dubious material to little kids era! Which meant that we finally got our wish! And you do know what - the movie's rubbish! Brilliant effects from a young Rick Baker mind you, but other than that utter tosh! Ah well... Some things are best left in the imagination, and old Pizza-face is one of 'em!