Now of course you can't have a horror themed card game without a zombie or two, but the question is: which cinematic grave did this chap crawl out of? Now some horror trumpologists have suggested this fellow - the iconic cover star of this Lucio Fulci gut-munching classic

Now there is a certain resemblance, but I'm not sure it's close enough. Plus there is a small problem of chronology, Zombi II aka Zombie (in the US) and Zombie Flesh-Eaters (in the UK) wasn't released until September 1979 in its native Italy, and somewhat later in other territories, and the Horror Top Trumps were released in 1978... So then back to the cemetery to dig again...

Another contender is this classic screen revenant - Mr Grimesdyke from Tales from the Crypt (1972), an anthology horror from Amicus based on the infamous EC horror comics from the 1950s. 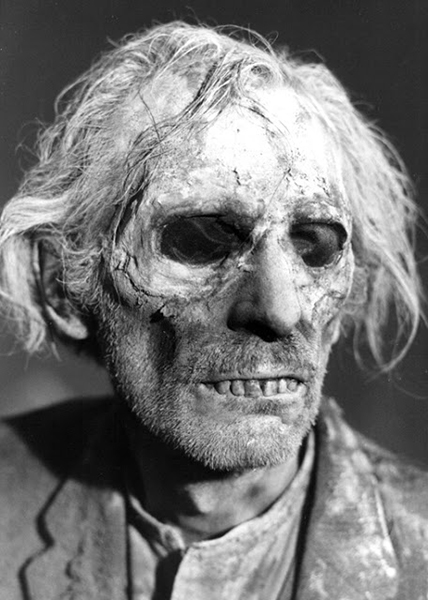 Based on the tale Poetic Justice from the Haunt of Fear #12, the cinematic version sees the great Peter Cushing returning from the grave to wreak revenge on those who drove him to his death. However as wonderful as this decayed horror is - a brilliant make-up by Roy Ashton - and although there are some similarities, I'm not sure it's the model for The Risen Dead. 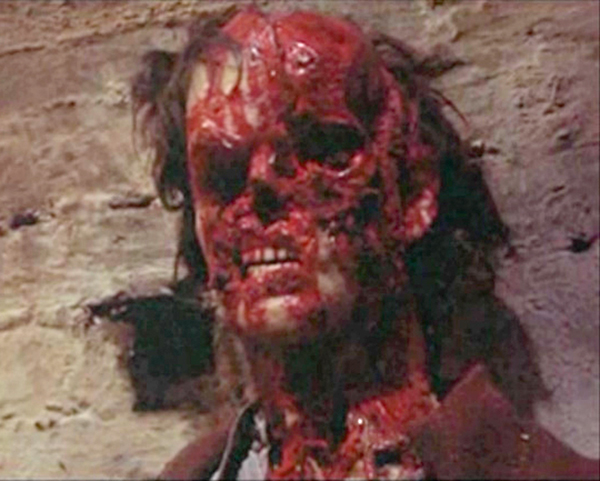 However once again, while there are some similarities I don't think it's quite close enough! In general I feel this one is not quite skeletal enough. So then, while there is not a shortage of corpses and walking dead with empty eye sockets, I can't seem to find one that matches well enough. And all our contenders are missing the distinctive clawed hand posture and decayed funeral suit. It looks like the secret of this card has been well and truly taken to the grave!

And so that rounds off another visit to the realm of old horror tat... But hold on, what's that?!? Look again at the Risen Dead card! On the tombstone in the background is a name - and as far as I can make out our Unknown Artist hasn't taken the usual route of sticking on a famous name as a jokey homage. so then, I can't help wondering if this is actually a secret signature, and this background grave reveals the Unknown Artist's real name!

I'm fairly sure the first name is 'Derek' but the surname is a bit tricky to make out... Could this be the long-sought clue to the creator of the cards?