Now a doubled headed gorilla might well suggest a very lazy card creation. Draw an ape, add an extra bonce, chuck in a little bit of blood and a severed limb to keep the kiddies happy, and voilà we have a brand new monster at very notice! Job done!

However, this card was actually inspired by a real movie. No, honest it is! Have a gander at this still from The Thing With Two Heads from 1972! 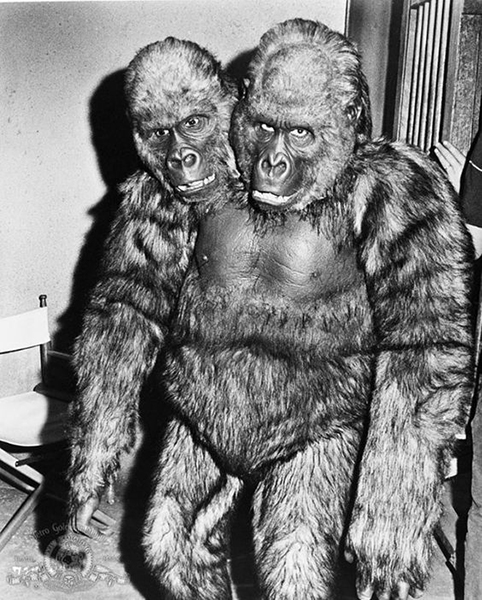 Now if you think that's strange, prepare to be astounded! For this twin noggined primate isn't actually the titular horror in that movie! And while this atrocious ape was an early creation of make-up wizard Rick Baker, this creature is revealed early in the movie as just a dry run for the experiment a less-than-sane doctor is going to perform! Now transplant surgery has been a staple of horror a good while, going all the way back to Frankenstein. However there has never been a movie quite like The Thing With Two Heads... and probably for very good reason... I think I'll just let the poster explain it all... 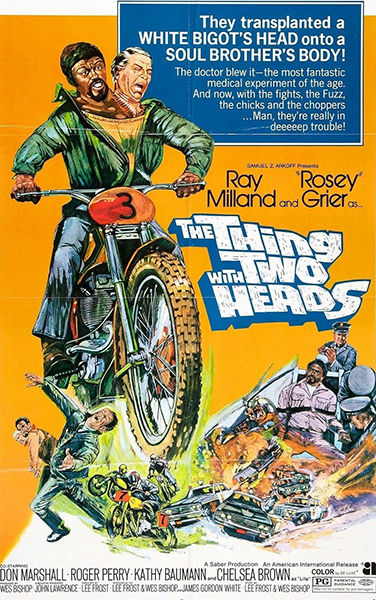 Directed by Lee Frost, and co-written with Wes Bishop, no one seems entirely sure what the hell this movie is going for... Horror? Comedy? An insanity plea? I'm tempted to say perhaps it was intended as some triple-headed transplant of all three. However I suspect a fourth motive at work - for a year earlier another low budget flick The Incredible 2-Head Transplant (1971) had staggered into theatres. This movie featured a sanity-deficient doc grafting the head of a murderer onto the body of a mentally challenged man. Now details of box office takings for this movie aren't readily available, but I'm guessing it made enough for Frost and Bishop to reckon there was gold in them thar two-headed hills!

Unsurprisingly this flick often features in lists of movies so terrible they are hilarious, or round-ups of the most oddball movies ever made. Certainly it has to be seen to be believed - but I wouldn't necessarily take that as a recommendation!