So then dear friends, we have reached the end! For we are very near the end of all the cards in the unhallowed vaults of the Tomb of the Trumps! But as a great man once said - no tears please: it's a waste of good suffering! So then, what is the penultimate card in our hand?

Well, first off we have this hirsute chap! Now then, the last time we encountered a lycanthrope in these decks we did have a spot of bother identifying his origins. However in the case of these particular fellow, I'm sure his furry face is instantly recognisable to all fans of vintage horror flicks! For this is the titular transformer from AIP's I Was A Teenage Werewolf! 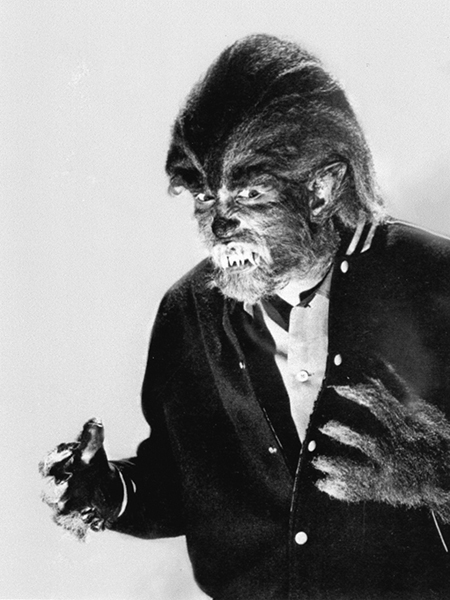 Made in 1957, this fondly remembered flick was the first of four creature features made by AIP to star teenage monsters - the others being I Was a Teenage Frankenstein, Blood of Dracula and How To Make a Monster. And in I Was A Teenage Werewolf, troubled teen Tony Rivers (played by a young Michael Landon) is sent to a psychologist to sort out his Rebel Without A Cause tendencies. Unfortunately for Tone, the head shrinker in question turn out to be a budding mad scientist (played by Whit Bissel) who treats him with a serum with brings out his primitive traits... Which of course will result in poor Tony ending up having to comb his face before he goes out and eating his fellow students!

Of all these AIP teen horrors, I Was A Teenage Werewolf has probably had the largest and most long-lasting legacy, for it launched Michael Landon's career, and inspired several imitators. Hanna Barbara clearly drew inspiration from it and/or ripped it off wholesale for their 1970s cartoon Fangface, and again to a lesser extent again in the 1980s for The Drak Pack which featured the teenage children of famous Universal monsters. Also in the '80s, we had Michael J Fox in Teen Wolf, which in turn spawned a sequel and, in the last couple of years, a TV series. Meanwhile the original Teenage Werewolf made a memorable cameo in Stephen King's epic novel It as one of the guises of the shape-shifting horror Pennywise. 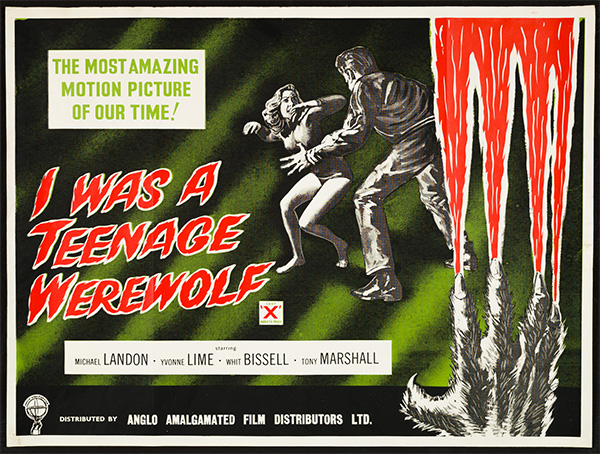