Now then, as you may remember, we encountered a similarly seemingly made-up for this deck clerical horror figure, the High Priestess of Zoltan (see here) and now, we have the lad himself! Quite why this green-faced, spikey-headed google-eyed freak warranted a High Priestess is sadly some thing I'm guess not even the deck's designers knew. However like his priestess, old Zoltan has his origins in demented early '70s horror. For as you can see, "Zoltan" is very obviously this creation from the 1971 Italian horror flick Lady Frankenstein. 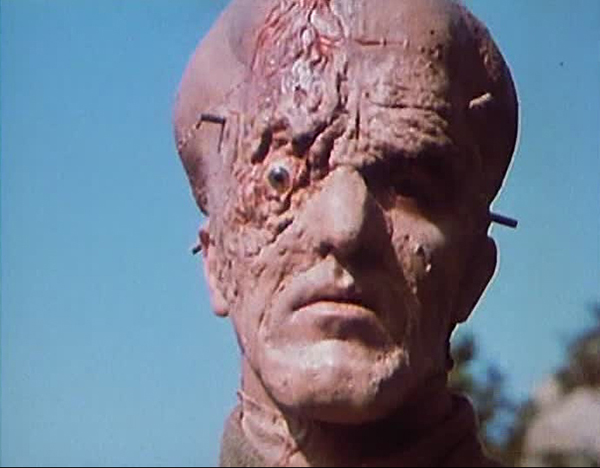 Now under all that latex is a Mr Peter Whiteman and, as far as I can tell, this was his only role. Funny that... Anyhow, this odd little movie introduces us to Baron Frankenstein's daughter Tania, played by Rosalba Neri, and this plot sees her returning from college to help out dear old dad, played by Joseph Cotton, with his notorious experiments. Of course, the first monster they make promptly runs amuck and escapes, and Tania continues her experiments by planning to transplant her lover's brain into a new younger body. Needless to say it all ends in tears, with a pitchfork wielding mob of villagers deciding they had enough of the Frankensteins' shit. Some have seen this movie as an attempt to put a feminist slant on the Frankenstein mythos, but I fear more have seen it as a chance to ogle Miss Neri with her kit off... It's a fine line between sexual liberation and sexploitation... But anyhow, Zoltan brings us to the end of the Devil Priest pack, but fear not dear friends, for our investigations will be continuing with the second deck, the Dracula pack!